Sales at the national burger chain restaurant in the University of California-Santa Barbara student union had been declining for years, so Director of UCen Dining Services Sue Hawkins decided to pull the plug and try something new. Burgers and fries were still in the cards, but Hawkins felt the time was right to kick that formula up a notch and tap into a growing sustainability movement at UCSB. 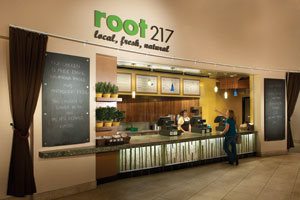 UC Santa Barbara’s new fast-casual restaurant, Root 217, touts a menu of fresh, local, organic and sustainable choices and 100 percent compostable disposables. Slate boards on either side of the counter are used to educate patrons about the sustainable choices offered. Even the t-shirts worn by staff are made of organic cotton.She wanted a new concept focused on fresh, local, natural and organic ingredients. Unable to find the right one to franchise, she and her team created their own concept. Root 217, which opened last October, hit all the right buttons and was rewarded with a 2012 Best Practice Award for Sustainable Foodservice at the California Higher Education Sustainability Conference.

Located in The Hub, a food-court-style space with seating for 250 on the lower level of UCen, the student union, Root 217 is one of 18 retail foodservice venues Hawkins manages across campus. While a few other venues added limited organic offerings, and all residential dining commons made moves to add local, organic and sustainable items, Root 217 is the UCSB's first dedicated organic, sustainable foodservice concept.

"I got the original idea from the Burgerville chain in Oregon, which has expanded into California and uses a lot of local and organic products. We weren't able to connect in terms of franchising a unit here, so I decided to send a couple of my culinary staff up to Oregon to look at it and talk to the people there," Hawkins says. "They were very positive about it when they came back, so we went to work creating our own concept. We choose the name Root 217 as a play on Route 217, which is a highway that comes into campus."

Converting the roughly 1,000-square-foot former chain restaurant space was relatively easy — no equipment or back of the house changes were necessary, just a new façade. Thompson/Naylor, a local architectural firm that has won awards for its work in sustainability, was brought in and charged with creating a fresh, contemporary look for Root 217 using all sustainable materials.

Sustainability, of course, is on the menu. Launched as a limited-menu, fast-casual operation, core food items include:

Root 217 uses all local produce and cheeses are organic, as are the regular and sweet potato fries and onion ring sides. The grass-fed beef for the burgers comes in fresh from a local meat purveyor. Condiments are all natural or organic and beverages include traditional sodas as well as organic brewed iced teas, bottled water and a variety of organic juices. All disposables are compostable.

"We have two culinarians on staff and I gave them direction to create a menu as much as possible out of local and organic ingredients," Hawkins says. "They spent several months testing products and developing menu items and we did a lot of taste testing. At least 40 percent of the menu is organic and we always go with organic when we can get it."

Since its initial debut, Root 217's menu has expanded to include two scratch-made chilis, wrap sandwiches and specialty burgers. The foodservice operation tests new items as off-menu specials and the most popular among the test items become part of the permanent offering. "We started off with a very limited menu because we wanted to get it right," she says. "We wanted those people who aren't particularly motivated by sustainability, per se, to like it because the food is good."

Though it shares front-of-the-house seating space in The Hub's food court with two leased chain concepts, Panda Express and Wahoo's Fish Taco, Root 217 has its own production area and storage. "None of the concepts share walls, so each operates completely independently," Hawkins says.

Fast-casual in format, Root 217 has customers place their orders at the counter and get a number. They then grab a seat and watch for their number to appear on wireless call boards positioned throughout the seating area. When patrons finish their meals, all Root 217 trash goes into a designed receptacle, the newest part of UCSB's extensive composting program.

"We've been composting pre-consumer waste for four of five years," Hawkins says. "When we developed Root 217 we obviously wanted to get into post-consumer waste recycling. It happened to be pretty easy because our trash is primarily in one area and we have separate bins for Root 217 within our food court area. So we started composting the paper plates and other disposables. Anything that comes out of Root 217 can go into the compost. My push now is to get the other concepts in The Hub to go compostable, as well."

She notes that the university continues to develop its campus-wide composting program in cooperation with its trash hauler. While significant progress has been made — the campus diverts some 70 percent of its trash — challenges remain to ensure that compostable products actually end up in a composter. "I have units spread all over campus and if we're going to be putting compostable products in there from takeout we have to find a way campus-wide to collect it. I'm working with the campus and the trash hauler on that, but it's tough. I can't justify spending the money on compostable products that don't end up getting composted and simply wind up in the landfill with everything else. I feel that's dishonest, but I also feel that we'll have a solution worked out within the next year or so."

In the meantime, as UCSB continues to hone its award-winning, campus-wide culture of sustainability. Root 217 provides a breakout, well-received initiative that promises to impact other foodservice operations campus-wide, as well.