The increasing popularity of breakfast paired with the efficiencies of a single-shift operation have these limited-service restaurants, which specialize in breakfast and lunch, rising and shining. 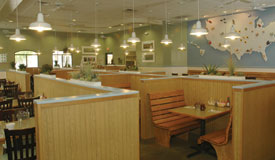 U.S. Egg RestaurantBreakfast is booming in restaurants. This daypart was one of the few bright spots in the foodservice industry during the recent economic downturn.

"There aren't a lot of full-service, mid-scale chains that are growing and improving, but breakfast-focused concepts are increasing," explains Mary Chapman, director of product innovation at Technomic, a Chicago-based foodservice research firm.

If not for the breakfast daypart faring relatively better than lunch and dinner, restaurant visit declines over the last two years would have been steeper, reports the NPD Group, a market research company based in Port Washington, N.Y. NPD's foodservice market research shows that, for the year ending March 2010, there were more than 12 billion morning meals served at U.S. restaurants, and 80 percent of restaurant morning meals were purchased from quick-service restaurants. Over the past five years, morning meal traffic increased an average of 2 percent per year, comparatively, while lunch visits were flat, and supper traffic declined by 2 percent per year on average.

"The only area that is growing is the breakfast segment," says Bonnie Riggs, NPD's restaurant industry analyst. "Yet, eggs as a product are down about 3 percent for the year due to the decreased traffic in full-service restaurants."

One reason for the anticipated success of breakfast is the more casual way consumers look to use full-service restaurants. "More families are going to brunch, since this is a less expensive meal than dinner and offers good value for the money," Riggs says. "We will see more of these types of offerings."

Despite being an area of growth for restaurants for the past few years, the breakfast daypart segment has yet to reach a point of saturation, which means ample opportunities remain within this category, according to Technomic's 2011 Breakfast Consumer Trend Report. Consumers increasingly look to trade at-home breakfast occasions for away-from-home purchases. Eighteen percent of consumers indicate they purchase breakfast away from home more often now than they did one year ago, due to the need for convenience, Technomic reports.

The breakfast-starch entrée group was the second most frequent menu category at mainstream LSRs, with 70 offerings, up from 54 items in 2009. Regardless of operator segment, the most prevalent entrée ingredients on breakfast menus include eggs, cheese, breakfast meats such as bacon and sausage, and potatoes, according to Technomic.

As the central component of egg dishes, eggs naturally lead all other ingredients at the top 250 and next 250/emerging chains, at 71.4 percent and 76.1 percent, respectively, according to the Technomic report. Rounding out the top five egg-dish ingredients are cheese, onion, cheddar cheese and potato — which ranks as the second most frequently listed egg-dish ingredient among the next 250/emerging FSRs, at 48.4 percent.

Consumers indicate that while restaurants are getting better at offering quick, convenient breakfast options, operators can boost incremental traffic and sales by offering craveable options and speedier service, according to Technomic. More than two-fifths of consumers who skip breakfast during the week cite a lack of hunger and time. Additionally, a quarter of consumers cite a lack of time as a reason why they skip breakfast on the weekend.

Consumer demand for breakfast offerings at varied-menu restaurants continues to rise. Health-conscious consumers are about three times as likely as convenience-driven and cost-conscious consumers to report an interest in breakfast offerings at varied-menu restaurants, according to the Technomic report. In addition, 18 percent of consumers indicate a willingness to pay more for natural or organic breakfast food ingredients, up from 12 percent in 2009.

As a result of breakfast's increasing popularity, the restaurant industry continues to see new egg-focused concepts appear — and with good reason from an operational perspective. "From an operator standpoint, there are many benefits in having to schedule and manage only one shift each day," Chapman says. "The quality of workers improves when staff has late afternoons and evenings free. Also, operators don't have to worry about serving alcohol."