Going Green on a Shoestring 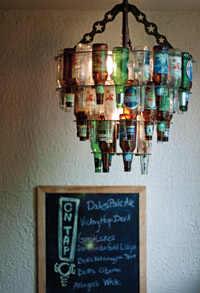 One of the restaurant’s most unique decorative pieces is a chandelier made from recycled bottles.It is possible to go green without spending a lot of green. Bread & Brew, a Washington, D.C.-based restaurant that includes a café, bar and catering business, had very limited funds to draw from before opening three years ago, but owner Teri Vangoethem would not compromise her sustainability goals.

"Many people don't do the green thing because they think it will be a big expense, but you can make environmentally friendly choices that are economical," says Vangoethem, adding that she has never revealed her budget or expenditures for the project. "Let's put it this way, I recently saw an article that detailed what it would cost to open this type of concept, and if I had half that amount to work with, I would have been happy."

Located in the city's DuPont neighborhood, the 90-seat restaurant is situated in a turn-of-the-century brick townhome that was formerly split into two residences. The building was initially a boarding house, then an antique store and later a pizza parlor for more than 30 years. Before becoming Bread & Brew, the site was a sports bar for about two years.

Recently, an elderly woman who visited the restaurant revealed to Vangoethem that she frequently visited the building as a child. She was the designer of the White House's Green Room during the Kennedy administration. "There is a lot of history here," Vangoethem says.

With this project, it was important not only to focus on sustainability, but also to preserve the building's unique character. Vangoethem, who formerly served as a manager for Dean & DeLuca and catering director at Balducci's, both specialty food stores located in D.C., contacted the Green Restaurant Association (GRA) for guidance prior to refurbishing the restaurant. She also did her homework. Along with writing to various vendors to seek out green supplies, Vangoethem looked for environmentally friendly products online.

A visit with her younger sister in London revealed even more possibilities, including pizza ovens that transferred excess energy to heat water. "London's restaurants were going green earlier than those in the U.S.," Vengoethem says. "I wrote down the names of the products and equipment I found overseas, then quickly discovered that these were not available in this country at the time."

The GRA did direct her to the Amicus Green Building Center in Maryland, which became a prime resource for building and design materials. "This a green Home Depot-type store," she says. "I was also given the names, phone numbers and e-mail addresses of green napkin, cutlery, paper plate and java jacket suppliers." 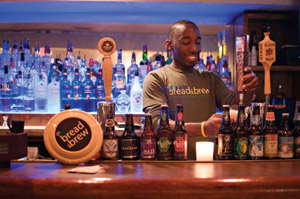 Before becoming the Bread & Brew, this space served as a sports bar in Washington, D.C.’s DuPont Circle neighborhood.One of Vangoethem's favorite finds was an environmentally friendly soy-based shellac, which was used to cover the brick walls, bar top and wainscoting surrounding the bar. At one point, when Vangoethem was off site, there was a miscommunication and the construction crew began utilizing conventional shellac on the basement bar. "We couldn't even walk into the building without masks, the fumes were so strong. It really opened my eyes as to the chemicals involved," she says. "The soy-based shellac cost less and there were no fumes." Vangoethem also utilized eco-friendly stains and sealers to refurbish the outdoor patio.

When a local organic restaurant chain closed its doors, Vangoethem purchased its high-end furniture at a fraction of the original price. Made from recycled iron, the patio furniture cost the same as a conventional set. One of the restaurant's centerpieces is a chandelier made out of empty beer bottles that is unique enough for customers to routinely include it in photos.

The use of recycled products does not extend to the kitchen equipment. "I don't purchase used equipment, since it is not energy efficient," Vangoethem says. "Fortunately, when the owner of a local foodservice equipment dealership learned about my green initiatives he allowed me to purchase energy-efficient equipment with low monthly payments and no interest."

Although Vangoethem was able to salvage the pizza equipment from the previous occupant of the space, she still had to replace three refrigerators, a freezer, prep tables and the pizza ovens.

Overall, changes to the existing structure were minor, since Vangoethem was on a shoestring budget. Yet the sustainable renovation initiatives garnered Bread & Brew more than 209 points, enough for Three Star GRA certification.

The focus on green extends to the menu, which includes locally sourced food and organic ingredients. "We have a very high food cost here, which is unfortunate," Vangoethem says.

The restaurant exclusively uses humanely raised meat from local farmers. The exception is the nitrite-free bacon. "If I bought this from a local farm, I would be paying three times more than I'm paying now. It's cost prohibitive," Vangoethem says. "Unlike large chains, I'm not able buy these items in large quantities to keep price points low. I'm hoping prices for these products go down as the demand from restaurants like mine increases."

Recycling waste oil to fuel vehicles has help make up for the extra revenue spent on food. "We used to pay people to haul away our oil," Vangoethem says. "Now I hear that people are stealing leftover grease to use as fuel."

Bread & Brew recycles its waste, but is not yet able to compost. "We would like to begin composting, but the companies we'd work with are too far away and would negatively impact our carbon footprint," Vangoethem says. "The laws are changing [and more companies are offering this service], so we expect to begin later this year."

The benefits of operating a green business go beyond the utility savings, which Vangoethem says is evident but not something she tracks. "I like being able to tell my customers that the sausage on their pizza came from a local farm and that their espresso is organic," she says. "I take pride in bringing out my big craft box of butter that was hand-scrolled the day it was churned."

While Bread & Brew does not advertise its green initiatives, staff will inform customers about the restaurant's sustainability efforts when the topic comes up. "We've also noticed that other green local companies seek out like-minded establishments to do business with," Vangoethem says. "This has been a big positive for us."

With a growing number of eco-friendly products hitting the foodservice market, even smaller independents now find that going green is no longer as prohibitive or costly as in the past. "Three years ago, it was difficult to even find green cocktail napkins for the bar," Vangoethem says. "Today, there are a lot more options for sourcing green products.

With a little research, it has become easier to seek out other businesses that have been through the process. "Operators would be surprised at how inexpensive it can be," Vangoethem says. "Even three years ago, going green wasn't much more leg work and was well worth the effort."