Just about everything at Milwaukee’s Iron Horse Hotel has a story attached to it. The 100-year-old warehouse it inhabits was initially built for a bedding company and then became home to a box company in 1927 and finally was transformed into a cold storage facility from 1955 until 2005. 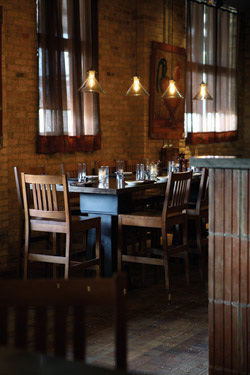 The owners of Smyth revitalized the restaurant by updating lighting, china, serving pieces and even the menu.

Established three years ago, the hotel was named after a Native American reference to trains, one of which runs nearby. Because motorcycles also have been referred to as “iron horses,” the hotel’s location near the Harley-Davidson Museum is another appropriate correlation. A third unique parallel was discovered after the hotel was named. Capital letters carved into the building’s century-old exterior resembled an “I” in a horse-head shape, along with an “H,” further proof that the name was fate.

The Smyth restaurant opened seven months after the hotel’s creation and reflects the facility’s overall historic ambiance. From its décor, which includes 300-year-old pine posts anchoring brick walls that showcase Route 66 photos by Milwaukee’s Tom Ferderbar, to the menu, featuring such classic dishes as venison osso bucco, filet mignon and herb-crusted walleye, Smyth is designed to be a place where both traveling CEOs and locals can be comfortable.

The restaurant recently underwent a revitalization, which included new lighting, china and serving pieces, as well as a revamped menu. “We are relaunching who we are, which is a casual restaurant offering amazing service and food,” says Jesse Wilder, Smyth’s food and beverage director. “With the new menu, everyone from CEOs to couples staying overnight can find something they can afford and enjoy.”

In addition to Smyth, which seats about 80, the Iron Horse’s foodservice facilities include Branded, a separate bar, and the Yard, an outdoor venue. Each operation is a separate entity within the hotel.

Along with lunch, dinner and brunch, Smyth offers catering service in four banquet rooms. A 16-person boardroom and the 25-seat Sandbox room are located on the fifth floor. The Gallery banquet room on the lower level also serves as an art gallery.

Iron Horse’s catering facilities include a library complete with large tables, a fireplace and filled bookshelves. This doubles as a breakfast room and is reminiscent of the space where Iron Horse owner Tim Dixon ate meals when he attended Catholic school as a child.

Smyth’s back of house has systems in place that enhance consistency, while the focus in the dining room is about creating a unique experience for each customer. The emphasis is local. Foods, including pickled herring and meats, are sourced from area producers. Everyone from servers to bellmen is taught about the food. “We try to go the extra mile to have that Wisconsin connection,” Wilder says. “We tie in to local suppliers and teach our servers and other staff what our food is all about.”

Not surprisingly, the dinner menu starters emphasize cheese, a Wisconsin staple. Other starters include meat and fish boards with selections from the region. The eight entrees include four types of steak, fried chicken, a veal chop and grilled vegetables.

Smyth offers a Route 66-themed Sunday brunch, enhancing its Ferderbar photos with items from the street’s truck stops and diners. Along with the traditional breakfast items, the menu includes unique themed selections such as Flannel Hash from the Pure Café and Truck Stop in Towanda, Ill., which includes short rib and corned beef hash with sweet potato, red and golden beets, parsnips and sweet peppers; and Scotch Eggs (a bourbon- marinated hard-boiled egg wrapped in sage breakfast sausage with breading) from Lincoln, Ill.-based Tropics Restaurant and Lounge. “This brunch has been one of our biggest successes in the last year,” Wilder says.

Because it is in a 100-year-old building, the kitchen is the size of a shoe box. A weight-bearing beam hovers above the middle of the cookline, which consists of a flattop griddle, two fryers, a 10-burner range above a double oven, a three-foot char broiler and a salamander. The back line includes a prep station, combi oven, convection oven, tilt braiser, range, mixer and cook/hold unit that also serves as a smoker.

The cold storage area was expanded and includes a walk-in produce/dairy cooler, walk-in meat cooler, walk-in freezer and a new storage/banquet prep walk-in cooler in the subbasement. “With the banquet walk-in, we can roll speed racks in and out on the concrete floor,” Wilder says. In addition, an extra walk-in was added for beer kegs, and tap lines were installed during the overhaul.

Appealing to a broad demographic is an ongoing challenge in the hotel restaurant segment and one the Smyth operators have sought to address with the revamp. “We have a vast array of guests and strive to be approachable, but covering that gamut can be difficult,” Wilder says.

It helps to have Dixon at the helm, who Wilder describes as an artist with amazing ideas and new plans that consistently take his vision to the next level. There are discussions about adding more banquet space and turning the boiler room into either a pool and hot tub or a catering area.

At press time, the Iron Horse had been named Boutique Hotel of the Year by the Boutique and Lifestyle Lodging Association. As an accessible Milwaukee eatery with an emphasis on local dishes and ingredients, the Smyth restaurant deserves accolades of its own. The operation’s recent revitalization and enhanced focus provide added polish to this Midwest gem.