Competing in the crowded pizza segment is a challenge for any restaurant, let alone a retail convenience store chain. Yet, Casey's General Store, a 1,600-store chain based in Ankeny, Ia., has more than competed — it has thrived. 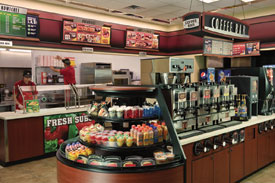 The Casey's prepared-food operation represents nearly 30 percent of the chain's total gross profit dollars and is one of the highest gross profit contributors, even topping fuel sales. Its flagship pizza is so popular with customers in the 11 Midwestern states the chain serves that Casey's will soon offer a delivery program.

"In terms of the number of retail outlets, we are a top 10 retailer of pizza and cake donuts in the country," says William J. Walljasper, senior vice president and CFO. "We sell a lot of prepared food."

Part of Casey's success can be attributed to the retailer's business model, which includes stores primarily in small, rural communities. "About 75 percent of our locations are in towns with 10,000 people or less, and 50 percent of our stores are in areas with populations of 3,500 or less," Walljasper says. This has helped insulate Casey's against competition from big-box retailers.

The chain, which has been in business since 1968, has offered prepared food since the early '80s. Yet, unlike many of its would-be competitors, Casey's operates kitchens that are on site instead of being centralized.

Casey's new "O" store design has helped expand its foodservice program even further, with the addition of made-to-order subs and more fresh-baked products. The chain also recently expanded its coffee bar to offer a wider variety of flavor profiles, including cappuccino and iced coffee. In addition, the company added self-service soft-serve ice cream about two years ago. This new store prototype has expanded the Casey's footprint to 3,700 square feet from 2,700 square feet.

"About half of the 1,000-square-foot addition is dedicated to prepared food," Walljasper says. "The other half is geared toward cooler space and seating."

Although Casey's has been expanding its prepared-food menu, pizza remains the focus. As a result, the chain continually adds new pizza varieties to the mix. In the last year, bacon chicken ranch, mac and cheese, and buffalo chicken varieties were introduced. "C-stores are looking for products to meet customer demand. Yet our menus are not only about product selection, but also are based on convenience," Walljasper says.

Quality is the main focus of Casey's pizza program. Its pies are made from scratch on site, using 100 percent whole-milk mozzarella cheese. Casey's menu also includes subs, which are offered in 350 locations, along with a variety of other sandwiches, chicken tenders and bakery items. Newly added menu items include quesadillas and a to-go cup with snacks, including fresh-baked mini chocolate chip cookies.

The chain has also co-branded through acquisitions. As a result, approximately a dozen stores are adjacent to Blimpie and A&W quick-serve restaurants. "It's not something we're looking to expand upon," Walljasper says. "When we acquire locations, we evaluate adjacent foodservice operations to see if we want to continue with the co-brand. There are times we decide it's not in our best interest."

Casey's foodservice operations have more than proven they are strong enough to stand on their own. The kitchen equipment lineup includes a conveyor oven, a mixer, a donut fryer, three food warmers, dough rollers and two prep tables for pizza and sub production. All equipment is tested before it's purchased.

"We're looking at remodeling our existing stores to include expanded coffee stations and made-to-order subs," Bacon says. Casey's has completed 130 major store renovations, which are being evaluated for efficiency. The chain also continuously evaluates new equipment for its stores.

"Most equipment has improved over the years, such as the conveyor ovens, which offer push-button controls instead of dials," Bacon says. "The one thing we've noticed an improvement on is the dough rollers. In the past, workers would experience injuries, such as cut fingers. Now it's almost impossible to get injured on this equipment."

When purchasing equipment, ease of use, durability and warranties are critical. "Our equipment has to be user-friendly for our store operations as well as be easy to maintain at the store level," Walljasper says.

From a retail perspective, having the appropriate products available at the right times can be a big challenge. Typically, stores have items like breakfast sandwiches and pastries out from 6 to 9 a.m. Lunch offerings are featured until 2 p.m. Product is only held in warmers for an hour.

Each store has an hourly production planner who determines when and how much prepared food will be available. Business intelligence software is also utilized for this task.

"The intent is to make sure we have the right products out at the appropriate times of day to meet customer demand," Bacon says. "We want to avoid throwing product out or missing sales opportunities."

"The economy has hurt the restaurant business more than it has affected us," Walljasper says. "The Midwest agricultural economy is robust, and we believe this has resulted in more consumer confidence in our demographic areas."

New additions to the foodservice program include seating in 150 stores and testing pizza delivery in six locations.

Casey's is also evaluating the expansion of its bakery offerings to include pies, cakes and more breads. "In every store — whether it's new, remodeled or acquired — we evaluate the potential of an expanded coffee bar, made-to-order sandwiches and pastries," Walljasper says.

Even though its out-of-the-way locations keep competition at bay, Casey's has built its success on making its prepared food a destination for its customers. "Our company's prepared-food operation is not just an afterthought," Walljasper says. "It's a significant part of what we do."