When it comes to energy-efficient griddles, the energy-efficient part really varies by operation and need. "Griddles are heavily cost-driven and it's difficult to justify the strategies that make them more efficient," says David Zabrowski, director of engineering at the Food Service Technology Center (FSTC) in San Ramon, Calif. 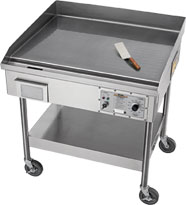 So when it comes to getting the most out of a griddle with the least amount of energy use, it's all about knowing the nature of the cooking application and selecting the right type of griddle for the operation.

Griddles were one of the more recent additions to the Energy Star rating system. "The first wave was refrigerators and freezers in 2001, then fryers and holding equipment in 2003, then dishwashers, icemakers, convection ovens and then griddles later in 2009, so they're still fairly recent," Zabrowski says.

That said, a lot of testing still needs to be done when it comes to getting the most accurate energy use measurements for the equipment. Testing originally started with gas griddles, but "when the specification for electric griddles came out it dropped the energy-saving requirements for everything so all products had to be re-qualified," Zabrowski says. That was earlier this year in January, and FSTC is still working through those changes.

The problem is, griddles come in different shapes, sizes and cooking power capability, and the type that's selected really needs to match the needs of an operation. "With a six-foot gas griddle you could use twice the energy of a three-foot griddle, but you'd expect that; otherwise you'd have a three-foot griddle," Zabrowski says. Even though gas griddles naturally use more energy than electric griddles, operators may want to go with them just to get the power they need, depending on menu construction and volume.

However, under Energy Star differences aren't taken into consideration, which can make the playing field uneven. Right now, testing is only conducted on a gas or electric griddle using frozen, ¼-pound burger patties with 25 percent fat. The Energy Star requirement for gas griddles (effective May 2009) calls for 38 percent or more energy savings with a normalized idle energy rate of 2,650 Btus per square foot. The requirement for electric griddles calls for savings of 70 percent or more with an idle energy rate of 320 watts per square foot. So, electric griddles face tougher standards. Last Zabrowski checked, only two electric brands met that requirement.

"I think it's been frustrating on the industry's part," Zabrowski says. "They're obviously interested in playing with Energy Star and have products that qualify, but we have to take everything on a case-by-case basis. You have that double whammy of tighter specification combined with certification bodies with no experience running those tests."

Knowing the Application
If you need power, you need power. Traditional cast-iron and chrome-finished griddles are known for being workhorses in the kitchen, but they can be energy drains as well, if not specified properly.

That's what makes understanding the application so important. What is the operation cooking? Burgers? Chicken? Crepes? Will culinary staff sauté vegetables on the griddle? This is important to note because not everything cooks optimally at 375 degrees F. In some cases, griddles are used only for searing off beef tenderloin medallions before banquet service after they've been cooking in a combi oven. In that case, the operator needs the heat and power, not the finesse.

Another key factor is the flow of the culinary staff's work day. There may be a time during the day when the staff cooks 300 hamburgers in two and a half hours and they're getting clobbered. If they have an Energy Star griddle but it's only capable of cooking 200 hamburgers in an hour and the load in the restaurant is 400, that's a problem. So it is necessary to consider the production capacity for the installation.

Failure to do so may result in the operation using more energy just to get through cooking. Similarly, don't buy more griddle than the operation needs. If the operator gets one that's too powerful, it runs the risk of draining too much energy during idle times.

Selecting Steam
Gas steam griddles work by emanating heat from a ceramic plate underneath a chamber that creates steam and can heat up to 200 and 400 degrees F. Electric units create steam through a heating element submerged in distilled water. They're also space-saving, at around 4 feet with 9.6 kW.

Both gas and electric griddles, steam or not, have the same fire power, but a lot of foodservice operators do switch to electric because a gas unit can exhaust 700 to 900 Btus of flu gas out the back of a hood system that needs to be sucked up. However, stainless steel, which is the material used for steam griddles, does not radiate as much heat as carbon or chrome, according to some industry experts.

Another benefit of steam-type griddles is that they can have a more even cooking platform over the long haul. Many high-volume operations require a more even surface to not only ensure consistency in their product, but also give themselves more cooking surface area and thereby more cooking capability and speed of service.

In addition, steam griddles have a reputation for having a fast recovery time, which again, works well for high-volume, quick-cooking applications. Burger chains tend to be big users of steam griddles and the same applies to high-volume breakfast chains.

Because steam is attracted to anything colder than itself, when you put cold meat on the griddle, it instantly gets to work. When the meat goes away, so does the steam. Idle time on these griddles also works differently. Whereas traditional griddles may turn all the way off when not in use, working hard to fire back up in between cooking, steam griddles cycle on and off – they remain on for 15 seconds, off for 2 minutes during idle time so they remain off 80 percent of the time but still have that reserve power to fire back up at a moment's notice.

The stainless steel construction of these griddles makes it easier for staff to clean and maintain the equipment over time. But the stainless steel construction combined with a moist heating element can cause the equipment to sometimes fall short of creating a good sear. As a result, they're not as sought-after for cooking steaks and chops or even seafood.

Managing Idle Time
Steam griddles have built-in idle time management, which is one of the most important ways to maintain energy use, and what researchers at the Food Service Technology Center look at when conducting tests.

More operators are looking now to turn off the griddle and other equipment during non-peak times. And traditional griddles are matching that trend — newer models come equipped with rapid recovery systems, which help power up the machine faster when needed.

In addition, griddles with chrome finishes tend to have lower idle rates than plain cast-iron ones, according to Zabrowski. "They generate less heat so they use less energy, and they're cooler to work in front of, but they can be expensive."

The most efficient griddles when it comes to idle time, according to Zabrowski, are dual-sided or clamshell types. "When the upper cooking is in the down position, it helps insulate the bottom griddle plate and there is less heat loss during idle time," he says. It's natural insulation.

These units are also known for their extreme cooking speeds, so they're highly sought after by the quick-serve segment.

"The main way griddles lose energy is through a hot surface radiating heat to any other surface in direct line of site, like walls, vents, etc.," Zabrowski says. "So the way these dual-sided griddles have reduced that heat loss is to change the surface in contact."

Careful Controls
When it comes to griddles, controls are a big issue, Zabrowski says. "Some manufacturers put relatively inexpensive controls on the unit to keep the costs down. But, these traditional controls can be fooled by burner heat, and will cycle down or off if they can't detect a load. So, recovery time is longer than the time to cook. If we keep reloading, the average cooking surface temperature gets lower and lower and the food is cooked longer and longer."

Solid-state, or electronic controls, tend to have faster temperature recovery times, and, as a result, can cook faster and handle more. Zabrowski cites one example of a chain restaurant that found when staff loaded a griddle with more standard controls, the griddle couldn't keep up and was having trouble maintaining product quality standards and cooking time.

The smartest controls are electronic because they have the ability to read a wide range of temperatures. In the end, the smarter the griddle, the better it performs and the more able it is at staying at temperature — all these things lead to better food. And in the end, it's all about the food.

Specifying a griddle labeled energy efficient just because of its label doesn't always tell the whole story. A griddle is still efficient if it's cooking the product within the boundaries of desired serving time and if it matches the workload it's been given.