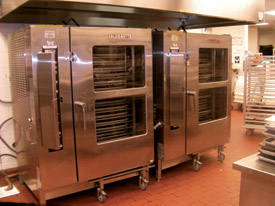 The Hennepin County Adult Detention Center uses ovens to bring certain menu items back to the proper temperature before placing them on trays and delivering them to inmates.

"We are a short-term-only facility with presentencing inmates," says Philip Atkinson, food service/laundry programs manager at the facility and Region III director for the Association of Correctional Foodservice Affiliates (ACFSA). "We provide tray-style service to two buildings from a 7,000-sq. ft. kitchen, which includes dry storage, freezer and coolers and production."

FE&S spoke to Atkinson about his operation and the corrections foodservice segment.

FE&S: What makes this segment unique?

PA: I never have to worry about having customers. Also, the focus is on per-meal cost as opposed to profit. I have worked in both for-profit and not-for-profit operations. All my efforts in corrections are based on a per-meal cost as it relates to the annual budget, as opposed to what my meal cost is as a percentage of bottom line costs as it relates to profit. There are many uncontrollables in corrections, such as method of service, which can be expensive and lead to waste issues. In addition, it takes a certain number of people to make our operation work. I can't slash labor to save money and still get the job done. Deputy staff cannot do what my staff does in addition to their own job assignments; it takes a certain number of people to make it work.

FE&S: What do you look for when purchasing equipment?

PA: The most important factors are ease of use, efficiency, durability and cost of the equipment. I do not think that cost should ever be the primary factor. You need to get the product that will meet the needs of your operation.

FE&S: What foodservice equipment is required for corrections?

PA: In most cases, large-quantity cooking equipment. In my operation we use 100- gallon kettles, blast chillers, roll-in retherm ovens and a fair-sized cooler for storing production items. Non-cook-chill kitchens will use somewhat the same equipment, with more of it geared to heating and holding hot food as opposed to rapid cooling and cold storage. And, of course, everyone needs good dishwashing and sanitizing equipment.

FE&S: What are the major changes is this segment?

PA: I've seen two major changes in recent years. First, the number of people incarcerated with health issues has increased substantially, particularly those with diabetes. Diet management has become a major part of my day. Secondly, the decline in the average age of those incarcerated. This has manifested itself as an "I want it now" and "I want what I want" attitude, which will cause issues in a correctional setting. We are not in the business of providing for individual likes and dislikes.

FE&S: What are the biggest challenges in the corrections foodservice segment?

PA: Cost and calories. Jails in Minnesota, as in most states, operate using standards set out by the State Department of Corrections. In Minnesota, we are required to serve between 2,200 and 2,400 calories per day; many states require more than 3,000. Finding the fine line between acceptable calories, proper nutrition and cost is our never-ending battle.

FE&S: What is the biggest difference between self-managed and contract-managed foodservice in the corrections segment?

FE&S: What are the security issues and limitations?

PA: Basically, if it can be used as a weapon, lock it up when it's not in use and track it when it is. If you must use knives, tether them to the table. If a part can be removed, there is a good chance the inmate will remove it and potentially do something bad with it. If it can be tinkered with, an inmate will do so. Constant supervision is the key.

FE&S: What is a typical menu for this segment?

PA: Most facilities are on a five- or six-week menu rotation. Also, most institutions will do as much scratch cooking as possible. Many now use legumes as a protein source, and all are staying within the 30 percent calories from fat or lower. Many also make a sincere effort to make their menus heart-healthy. Some of our more popular menu items are chili with rice, chicken rice casserole, hamburgers, which are a perennial favorite, and tacos.

FE&S: What are the labor issues?

PA: From a civilian standpoint, the biggest issue is finding people that want to work in a corrections facility and can pass the background check. Once you find someone you can hire, they need to be constantly reminded that people are usually in jail for a reason. You need to be cautious in your dealings with them, be alert to their scams. This is of major importance in a long-term facility. More than once I have seen very good people escorted out or arrested because they crossed the line when dealing with inmates. From an inmate-worker standpoint, the biggest challenge is developing a system that provides a steady supply of inmates that qualify for a job in the kitchen, working elbow to elbow with civilians of either gender. It's key to design systems that allow an inmate to become productive in the shortest amount of time possible.

FE&S: Have any equipment innovations had a positive effect on the corrections segment?

FE&S: What do you predict for the future of the corrections segment?

PA: One thing I do know for sure, it isn't going anywhere, and the chances are it won't get any smaller. I think we will see a marketplace where, as the old commercial said, "Special orders don't upset us." Processors and manufacturers will work with potential customers to produce a product for their specific operation. I think we will see an increase in multistep equipment that will help the institution better manage labor costs. And I hope to see standardized criteria for prison packages. ACFSA has done some work with this, but I would like to see an industry-wide collaboration.