New Ways to Save on Water

When it comes to water conservation, there are only so many times one can repeat the same old tips and tricks: install aerators on handsinks, use pre-rinse spray valves at dishwashing stations, buy water-saving warewashers. Most of us get it already. 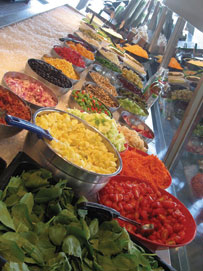 Instead of purchasing a warewasher, Snappy Salads installed a three compartment sink into its units that staff use to wash the various items the chain uses to serve its salads. Snappy Salads management estimates this choice reduces water consumption by 20 percent to 30 percent location.
It's time to examine some lesser-known, less talked about tools and techniques for saving water beyond turning off the faucet when not in use, not hosing down the kitchen, not using running water to defrost food and fixing noticeable leaks.

Auditing and Submetering
Leaks can contribute to 3,000 gallons of water lost a year with one drip per second, according to the National Restaurant Association Conserve Initiative. Conducting a water audit represents the easiest way to search for hidden leaks. Foodservice operators can do this on their own or by hiring an auditing firm to help with the process.

"When we're doing utility audits, water is a standard part of the audit, even though people seem more concerned about higher cost items like electric and natural gas," says Paul Kuck, an analyst and project manager with Advantage IQ, an energy and resource management consulting firm.

Water use consists of two components: in-house water use and water going out, meaning sewer costs. "Portland, Ore. has seen as high as 80 percent increases in water costs, mainly in sewer costs," Kuck says. "A lot of major cities have older sewer systems that aren't up to capacity for modern infrastructure so those things need to be paid for somehow."

In San Francisco, rates have been escalating in order to collect costs for a total water infrastructure overhaul, according to Mariann Costello, vice president of Scoma's on Fisherman's Wharf.

"From a cost perspective, we're seeing huge jumps in rates coming down the pipe," says Chris Moyer, director of the Conserve Initiative. "And when it comes to heated water you're wasting, then you're paying extra energy costs on top of that."

Used water and sewer water are calculated differently depending on the utility company, but many have separate irrigation meters so it's easier to see which side is causing escalating rates.

If numbers are going up on the water use meters, chances are there's a leak somewhere, according to Kuck. "You're not going to see the underground leaks, and those can get really costly," he says. "We had a client who had a leak going for years and they didn't notice until it became full blown and their water bill quadrupled. There was no water pooling because it was outside. What had happened was the water use crept up and maintained until it finally skyrocketed."

If a leak is suspected, Kuck and team will monitor a water meter during close of business when all water sources are turned off. Aside from an ice machine using water from time to time, any noticeable water activity likely comes from a leak.

Beyond that, submeters are a useful tool to pinpoint exactly which pieces of equipment and areas of the kitchen are draining the water. "You can attach them to a connectionless steamer, a combi-oven, a steamer," says Moyer. "Then you can really target areas of water-saving opportunity. It takes the water audit to the next level." Sub-metering does add on some additional costs upfront, but the potential for more savings can outweigh those costs and, Moyer adds, some states and municipalities offer incentives to do this.

Zero-In on Hot Water
"Sometimes we'll install flow meters on the hot water side of things to get an idea of the hot water use and measure hot and cold water use separately. Most efficiency measures, like aerators and pre-rinse spray valves, deal with hot water," Kuck says. Aerators on cold-water vegetable washing sinks reduce water usage but they're also a food safety measure to catch dirt, grime and debris coming through the faucet.

A typical baseline for hot water use in quick-serve restaurants hovers around 500 gallons a day, so numbers less than that will help save costs. For full-service restaurants, that number can jump to 2,500 gallons, according to stats from the Food Service Technology Center.

It's easier to establish reliable baselines for appropriate water use by looking at product spec sheets since the EPA now requires third-party testing for energy efficient-labeled equipment, Moyer says.

Newer Water-Saving Equipment
Aside from the usual suspects in water conservation — like tankless water heaters — high-efficiency warewashers and scrappers that use reclaimed gray water for rinsing and water brooms that can clean more efficiently than mops but eliminate the need to hose down an entire kitchen, there are a couple other pieces of equipment that also come in handy.

Waterless woks are making a wave in the market, Kuck says. Traditional woks use gallons upon gallons of running cold water to cool down the stainless steel tops that can reach extremely high temperatures. A simple shift in design results in less heat coming in contact with the base of the wok, thus eliminating the need for the water.

Air-cooled versus water-cooled refrigerators and freezers are also becoming more commonplace. High-efficiency icemakers also use air-cooling systems to reduce water use. There are a growing number of rebates for this type of equipment each year in certain states.

Enhancing the Dishwashing Station
The dishwashing area is another easy way to rethink water use. Scoma's has been using a foot pedal on its dish washing sink for years so dishwashers use what they need rather than letting the water run for hours on end. According to the National Restaurant Association, running a water faucet for five minutes uses nearly as much energy as running a 60-watt light bulb for 14 hours.

Snappy Salads decided to skip the purchase of a dishwasher all together and instead use a three-compartment sink to wash the stainless steel bowls and silverware they use for serving the salads.

"Our units are only 2,000 square feet so we're not a big, casual dining chain, but I think proportionally you can save 20 percent to 30 percent on a water bill, so it makes a big difference," says Chris Dahlander, owner of Snappy Salads in Dallas. "Twenty percent could mean $1 million or $10 million for a restaurant depending on size, but either way, it's a chunk of change you'd rather have in your pocket."

Preventative Maintenance
Sure, we know the old song and dance. Maintain, maintain, maintain your equipment to save energy and water costs. That's easier said than done for operators without good relationships with their service agents or even in-house maintenance staff like at Scoma's.

"Not everyone has in-house maintenance like us who can check for slow leaks, check the refrigeration and fix equipment when it goes down," Costello says. "But you can start by building a relationship with the people you purchase equipment from, and then work with your team, from the chefs to the managers and the staff members to pay attention to equipment that might not be working as well, or for potential leaks." The staff, then, becomes the eyes and ears of the operation and can help prevent costly problems before they occur.

Replacing gaskets is another easy way to save on water bills, Kuck says. A good rule of thumb is to replace all the gaskets in the kitchen when replacing just one, "rather than waiting for the gaskets to get leaks," he says. "It's easier just to change them all at once and it doesn't cost very much." Typical gaskets are only 25 cents apiece.

Training Staff
Equipment, maintenance and other tools will start an operation off on reducing water usage but so will rethinking operations and training staff.

"When we first opened, our staff would use hot water to melt the ice used for the front displays in the sink at night," Dahlander says, noting that the display case ice can't be reused the next day because of food scraps and food safety issues. "Not only was that a lot of water down the drain, but hot water. We had to stop the staff from doing that and just leave the ice in the sink to melt on its own."

Staggering start times and turning kitchen equipment on closer to peak hours also saves on both energy and water. "We had someone turn on the steamer first thing in the morning, and there really was no need for that," Dahlander says.

Choosing which vegetables to wash has also helped cut down on water use. "If we're removing the outside, we don't need to worry about washing those vegetables so thoroughly," Dahlander says. When cleaning dishes, instead of using a nozzle to rinse out each individual bowl, Dahlander taught his staff to simply pile up the bowls in the sink and spray down the one or two bowls at the top. The water trickles down to the bowls underneath, essentially creating its own spray valve. Then the bowls are washed in soapy water, rinsed and sanitized.

Bottom line, if you're "going green," water is an easy and less costly place to start. "You're essentially saving a resource that costs you money every month, so looking to conserve water is not just environmentally friendly, it's a way to save costs," Dahlander says.

"In order to be environmentally friendly, it can cost money," Dahlander says. "Our corn cups are more expensive, but if I've reduced the amount of water we use in the kitchen, that's a pretty easy solution and the payback is quick and fast."