There are situations in which inconvenience results in opportunity. Such is the case for Seattle's University of Washington.

When the university's housing and food services department became aware that the student union building would be shut down for two years due to renovations, the staff began searching for indoor retail space on campus. "We have 6,000 transactions daily out of that location, so we knew a great deal of revenue would be lost," says Lance LaFave, residential dining administrator for the school's housing and food services.

With no indoor space available, it was decided that a mobile dining unit was the best option. Initially, the university planned on setting up service in only one site by its commissary.

"Our original plan was to set up a sole location in Red Square, but there also was a real demand for mobile foodservice by More Hall, an underserved area by the College of Engineering," says Micheal Meyering, project and sustainability manager for housing and food services.

As a result, instead of just one mobile food truck, the plan was revised to include three trailer operations and two open-air food carts in two campus locations. The first step included an extensive approval process for each site in terms of aesthetics, since some trucks would be parked in view of the library and its gothic architecture.

There were only two regulations to contend with for the project. "We have many underground parking lots, so the trailers could weigh no more than 30,000 lbs. each, which wasn't a problem," Meyering says. "Also, because the sites being considered were large assembly areas, there were propane restrictions." Propane could be used but not stored on the chosen sites, so a storage area was designated at the loading dock of an existing foodservice operation.

After an extensive review of the campus' existing food offerings, the team came up with a few unique options. These included Hawaiian food, American barbecue, Mexican fare, hot dogs and New American/comfort food. "We selected these menu concepts, because they were either being displaced by the student union building or were items we weren't currently offering," LaFave says.

Before finalizing the food offerings, the school conducted tastings and portion pricing reviews with students, faculty and staff. A contest also was held to decide on the new operations' names. The net result of these efforts is a varied and eclectic mobile foodservice operation.

The Red Square food sites include:

Running mobile foodservice operations brings with them their own unique logistical requirements. "The mobile units utilize our larger facilities as commissaries," LaFave says. "Food is delivered to the trailers and carts to be finished off to order."

While the Red Square operations are adjacent to a commissary, the More Hall site is not. This necessitates the use of pickup trucks, heating units and modular refrigeration equipment to transport food items.

So as not to run generators 24/7 and to comply with local noise restrictions, the trailers and carts use shore power. "We can still go off shore power if need be, since we have portable generators and water tank access for all of the units," LaFave says.

Infrastructure for water, power, Ethernet and sewer water also was installed on both sites. Fortunately, there were no space constraint issues in terms of equipment. Undercounter refrigeration represents a key component in all of the university's mobile foodservice operations. 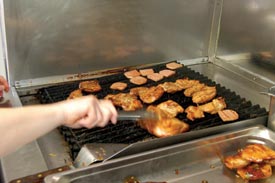 While many food truck operators will prep ingredients in a commissary, they will use items like the charbroiler seen here at the University of Washington in Seattle to cook food to order when out in the field.
Red Square BBQ's set up includes a smoker, bun toaster and hot holding unit. Along with hot holding capabilities, Motosurf has a 3-ft. grill, 2-ft. char broiler and rice cooker. "Síganos and Curbside 8 also have grills and char broilers, which give us great flexibility [in terms of menu changes]," LaFave says.

Another important factor for these operations was speed of service. "We needed high-volume throughput to make the operations work financially," Meyering says. Consequently, all mobile operations are cashless, accepting only credit cards or students' Husky meal plan cards.

Sustainability also was a major goal, with 'Zero Waste' the ongoing theme at all of the mobile operations. "Everything is either recyclable or compostable," Meyering says. "Food is served on compostable servingware, beverages are in recyclable cans and all waste is captured in designated bins."

The mobile operations have been so successful that the university plans to keep them in service, and possibly add more sites, after the student union opens in 2012. "If we expand in the future, we will look at units that are easier to move to different locations on campus, like smaller 10-ft. carts," LaFave says.

At press time, a new 100-seat dining pavilion was currently being built adjacent to the More Hall site, and the university was looking into incorporating mobile food operations as a part of its sporting events.

"We plan on keeping our locations around as long as the volume warrants it," LaFave says.