One the few bright spots for the foodservice market during the long recession has been in the retail prepared foods segment. 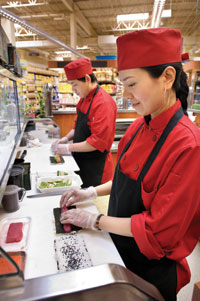 Many ShopRite locations now include an array of Asian specialties, including freshly made sushi, which customers can eat on premise or take out.

During the last year, the supermarket foodservice sector has experienced 3 percent growth to approximately $584 billion, and is expected to increase 4 percent in 2011, according to Technomic, a Chicago-based market research firm. In contrast, Technomic projects nominal growth of 2.4 percent for the industry at-large during the remainder of this year.

"Of all the foodservice segments we track, supermarket foodservice has been the best performing throughout the recession," says Jenny Anderson, Technomic's director of research and consulting.

Supermarket foodservice is nothing new. In the late '90s and early 2000s, retail prepared foods, then known as home meal replacement or HMR, was in full swing. The concept's goal was to give busy consumers a low-cost option to replace home-cooked meals.

"HMR died away and then came back in the last three to five years," Anderson says. "But it is really a different movement this time around. It's not just about home meal replacement, but also restaurant meal replacement. The arena is now more competitive."

Because time-starved Americans still have less interest in cooking meals from scratch in their own kitchens, even in this tough economic period, there has been a greater value placed on prepared food that is more difficult to fix at home.

Consequently, more retailers have entered this segment, determined to capitalize on consumers who are shifting their spending dollars to less costly meal options. Even though this means increased competition for restaurant operators, the good news is supermarkets have proven that it is possible to fare well in today's economic environment.

"For retailers with a customer base that was formerly eating out four nights a week and has cut back to two, it provides an opportunity to drive the store's gross margin," says Jim Hertel, who leads business development, client service and new solutions efforts, as well as the strategy development consulting practice, at Barrington, Ill.-based Willard Bishop.

Though the main drivers for these customers are convenience and affordable pricing, both selection and quality are now expected in supermarket prepared food programs.

"Retailers who just have rotisserie chicken programs won't get the job done," Hertel says. "They have to work at it and bring something unique to the table."

Supermarkets that have set their foodservice programs apart, whether with in-store dining, an expanded menu or affordable meal deals, have held up well during the recession, with some having gained market share, according to Bonnie Riggs, restaurant industry analyst for NPD Group's foodservice division.

Retailers are now transforming their stores to include different types of prepared foods. Alongside the fried and rotisserie chicken, sandwiches and sides are food stations highlighting ethnic items, gourmet entrees and innovative salads. "There is a bigger focus on chilled items that can be eaten later, in addition to more portion options to accommodate different household sizes," Anderson said.

Meal bundling that includes a protein with side dishes has also become more common. To meet the demands of different household sizes, supermarket foodservice programs are providing meals that feed single-person or two-person households as well as larger families with four to six people.

"These are great, affordable options on par with what you'd find in a restaurant," Anderson says. "The recession is the perfect climate to highlight these items, and more retailers have increased their investment in them."

The prepared food trends in retail tend to start with upscale supermarkets like Whole Foods, Byerly's and Wegman's. All three have implemented sophisticated restaurant concepts.

Rochester, N.Y.-based Wegman's Markets, which has more than 70 stores, went into the bar business in 2009 when it opened two versions of The Pub, a combination restaurant and bar, in two of its Pennsylvania stores. Modeled after a traditional Irish pub, the restaurant offers upscale fare, such as crab cakes with remoulade sauce, Vietnamese black tiger shrimp with bouillabaisse-inspired sauce and grilled New York strip steak with chimichurri or demi-glace, in addition to beer, wine and liquor.

Several of Lund's and Byerly's 21 locations include the Minnesota Grille restaurant within its stores. The extensive menu of the Minneapolis-based chain includes a number of breakfast, lunch and dinner items, including egg dishes, soup, salad, pizza and pasta, as well as comfort food entrees such as pan-seared sockeye salmon and a grilled Kobe-style corned beef Reuben sandwich.

Austin, Texas-based Whole Foods' prepared foods departments in its close to 300 stores may include a deli, an ethnic restaurant, burger joint, neighborhood diner, Parisian café, pizza joint, barbecue shack, sushi or seafood bar, raw foods bar, taco bar, salad bar, sandwich bar, olive bar and wine bar. These are headed by at least one experienced chef at each store, and all ingredients are natural, organic and, whenever possible, locally grown.

"Retailers are becoming restaurateurs as well as retailers," Anderson says.

Due to these more recent developments, consumer opinions about supermarket prepared food programs have changed. Technomic's Retailer Meal Solutions Consumer Trend Report, which provides the most recent quantitative information available on the supermarket foodservice segment, has found that:

To better compete in the foodservice arena, supermarkets also have focused on broadening demographics and expanding day parts.

"When we think about foodservice offerings from supermarkets that compete with restaurants, we tend to focus on the dinner meal occasion, but the higher percentage of sales comes from other day parts, such as morning meals and snacks," Riggs says.

In terms of buyers, 47 percent of those purchasing prepared foods at supermarkets are between the ages of 35 and 64, according to NPD data

"Consumers in New England, the Mid Atlantic and Pacific regions are more likely to frequent supermarkets for prepared food items," Riggs says. "With supermarket prepared food, 94 percent of all meals are carried out, and of these 57 percent are eaten at home and 70 percent are purchased on a weekday."

Riggs, the author of NPD's Future of Foodservice report, says one of the areas of the foodservice industry that is forecasted to grow more strongly than restaurants is meals ordered from supermarkets that are eaten at home. This report also found that foods being offered for immediate consumption by supermarkets were looked on more favorably by consumers. "Those surveyed noted the higher quality and healthier alternatives at the retail level as compared to restaurants," Riggs says.

Where retailers are lacking is in the variety of foodservice items available. "This means there's additional opportunity for retailers, but the challenge remains in offering food that travels well and stays at proper temperatures," Riggs says.

One of the other areas supermarkets struggle in is convenience. Unlike quick-service restaurants, there are no drive-through windows at supermarkets. Consequently, prepared food departments are not always convenient to access. "Consumers don't want to wait in long lines or go down long aisles to find these items," Riggs says.

Looking ahead, with food inflation and rising costs on the horizon, some predict a shift of food dollars to foodservice segments that have the lowest price increases. This could mean another win-win for supermarket foodservice programs.

"In the restaurant and retail foodservice arena, there will be winners and losers in the battle for market share," Riggs says.