Just like their parents, children in the U.S. have expanded their food repertoire.

The K-12 foodservice segment may not be big in revenues, but it is big business. In the fall of 2009, a record of nearly 49.8 million students attended more than 10,000 public elementary and secondary schools in the United States, reports the U.S. Department of Education's National Center for Education Statistics. Close to 35 million children were enrolled in prekindergarten through eighth grade and there were 14.8 million kids in grades 9 through 12. An additional 5.8 million students were enrolled in private schools last fall.

For the 2009/2010 school year, overall expenditures for public elementary and secondary schools are estimated at $543 billion, according to the Department of Education. This school year's national average current expenditure per student is projected to be $10,844, up from $9,683 in actual expenditures four years ago. 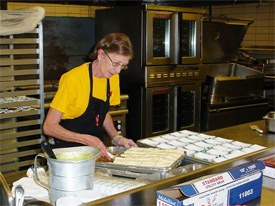 School District 111 in Kankakee, Ill., has moved from total scratch cooking to mostly heating pre-made product. This transition has allowed District 111 to add more options for the students it serves.

In the last several years, hot lunch programs have become more prevalent in the K-12 segment, with 94 percent of public elementary schools providing student meals, according to the Department of Education. To help generate funds to support school and district foodservice operations, 36 percent of these schools offer food for sale aside from standard meals.

In response to the USDA's school nutrition initiative, foodservice professionals in this segment report they now use fewer fryers, kettles and mixers than in years past, according to The Dream Kitchen Survey conducted by Y-Pulse, a research and consulting firm with offices in Chicago and Alexandria, Va. Instead, a growing number of school kitchens now use combi ovens, milk coolers, tabletop steamers, refrigerators, freezers and multifunctional equipment.

The prevalence of fresh and healthy foods, increase in shelf-stable products, greater interest in buying local ingredients and development of school gardens has had a strong influence on the layout and equipment of school kitchens, according to the Y-Pulse survey. School foodservice directors seek kitchen designs that are stylish and not institutional. 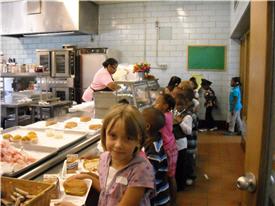 "For many school districts, new equipment is out of their price range," says Diane Pratt-Heavner, director of media relations for the School Nutrition Association, based in National Harbor, Md. As a result, the SNA offers Winston Equipment Award grants in conjunction with equipment manufacturer Winston Industries, based in Louisville. Schools can apply for 10 pieces of equipment, including holding cabinets, holding drawers, steamers, and cook and hold ovens. Grant winners are chosen based on need, the impact of new equipment on school foodservice programs and the proposed plan to integrate the equipment into their facilities. 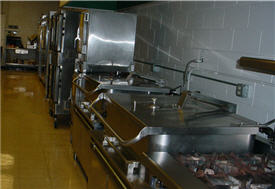 Schools also can apply for federal stimulus money to upgrade equipment through The American Recovery and Reinvestment Act of 2009, which was signed into law by President Obama on Feb. 17 of last year.

Because Haywood County serves such a large percentage of students, who have only 20 minutes for lunch, speed of service is critical for the district. That's why each school's cookline performs batch cooking and utilizes cook-and-hold equipment to expedite meal service. 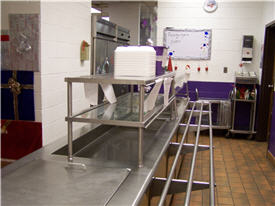 Brownsville, Tenn.-based Haywood County School District provides free lunches to 75 percent of its students, including satellite meals to Head Start and alternative learning programs within the county. As a result, speed of service is critical for the district. That’s why each school’s cookline performs batch cooking and utilizes cook-and-hold equipment to expedite meal service.

The district's ability to successfully provide meals in a timely manner was hindered due to the fact that staff was utilizing equipment that was more than 30 years old and in regular need of repair. As a result, the district was in dire need of newer equipment that would provide options for preparation, serving and menu updates. There also was concern that outdated cooking and refrigeration equipment would compromise food sanitation.

With the USDA's school nutrition initiatives, refrigeration needs also had become more prevalent. "With more fresh produce in our schools than ever before, in addition to juices, milk and other perishables, our refrigeration needs have changed in the last five years," Pyron says. "It was a struggle making do with what we had."

In 2008, Pyron applied for the School Nutrition Associations' Winston Industries Equipment Award to replace outdated operational equipment that was creating a barrier in meeting the department's mission. To apply, Pyron wrote a narrative describing the district's foodservice program and outlined why it needed to be replaced.

After applying for the award in September 2008, Pyron reviewed the district's foodservice facilities to see what items it could easily incorporate into its infrastructure. "Due to the aging infrastructure of the facilities, we needed to determine where equipment would fit and what utilities were available," she says.

With steamers already in place, the need was greatest for cook-and-hold ovens that would help the district meet the USDA's school meal guidelines. In December of 2008, Pyron was notified that the school district would receive a grant for 10 pieces of equipment valued at $80,000.

The equipment was designated for the district's high school, junior high and early childhood center, in addition to three elementary schools that also had received the USDA's 2008 Healthier U.S. School Challenge Silver Award.

"We had applied for the USDA award back in 2005," Pyron says. "It recognizes schools that provide meals above and beyond the USDA's nutritional requirements. Only 10 Tennessee schools received the award."
The district received the new cook-and-hold equipment last summer, and the units were operational by fall. The ovens replaced an old steam-jacketed kettle as well as an outdated steamer and oven.

Then, last June, the district qualified for stimulus money under President Obama's 2009 American Recovery and Reinvestment Act. The grant was made available to Tennessee school systems that provided at least 50 percent of its students with free and reduced meals.

To receive the federal funds, Pyron provided a list of the schools and the kitchens' equipment needs. "We had about seven items listed, including a walk in freezer. But the government wanted to give us a bigger bang for the buck," she says. As a result, the district was awarded a $26,000 skillet, which was received in November 2009.

"There is a misconception about school foodservice. Many people don't realize that it is a business with obligations like any other food operation," Pyron says. "Sometimes we are providing meals for students that pay less than $2 each. There is no way you can buy the types of meals we're providing for that price anywhere else."