Cooklines are the heart of an a la carte kitchen and typically take up around 25% of the space, so they’re a critical element to get right. Unfortunately, cooklines often get built without a full understanding of the menu they’re supposed to support.

“You need to know about your concept before you design your cookline,” says Michael Salvatore, CEC, senior director at Ruck-Shockey Associates, a foodservice and hospitality consulting firm. After defining the concept, next comes developing the menu. With those two tasks complete, then it becomes time to develop the cookline.

“You have to know how you’re going to execute your food,” Salvatore explains. For this, it becomes important to map out how raw ingredients will make their way down the cookline and into the hands of the customer.

“The menu is the driver, and needed throughput and prep time for each menu item should first be decided when determining equipment needs,” says Richard Eisenbarth, president emeritus at Cini•Little International. Operators also need to estimate the volumes they will do and exactly how they will cook everything, he says. 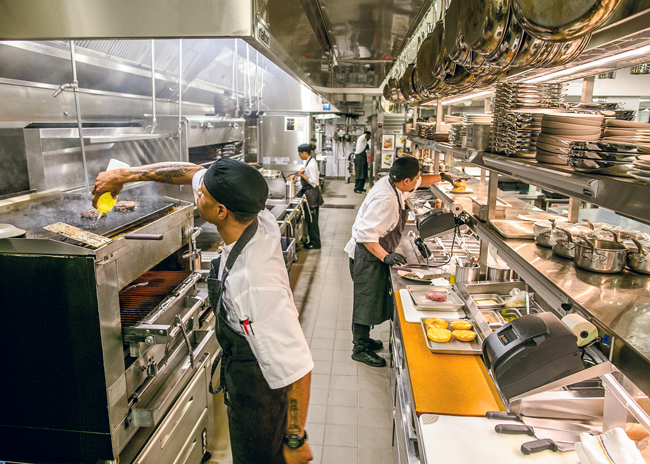 Knowing the menu before the cookline design process helps ensure efficiency of the space. Photo by Erik Meadows Photography

With the concept and menu in clear focus, deciding what equipment the cookline will need becomes easier. According to Eisenbarth, a standard cookline will include a broiler, one or more fryers, a range top, a grill, a speed oven for finishing and menu flexibility, or a stacked combination convection oven with a combi oven. Ideally, he says, operators should add equipment that has as much flexibility as possible “with a reasonable amount of automation built in so the line cook can do multiple tasks at the same time.”

The equipment that comprises cooklines continues getting more technologically advanced. Speed ovens incorporate a lot of menu flexibility and are smaller than combi ovens, says Eisenbarth. Cooks who don’t have either of these are missing out, he believes. “It used to be that no one wanted to deal with a combi oven, [but] we’re finally past that.”

Induction cooking can also be a great addition to a cookline, Eisenbarth adds, because this technology doesn’t use fossil fuels and it doesn’t churn lots of heat into kitchens. However, he points out, “There’s resistance from chefs because they want to see the flame.” But cleaning an induction range tends to be faster than a gas unit, he explains.

Combi ovens do offer some space-saving benefits given that they can potentially replace various pieces of equipment, depending on the application. Typically, the addition of combi ovens saves 8 to 10 feet in other equipment, says Salvatore.

Michael Scheiman, vice president, business development and design at Myers Foodservice Design + Build in Alameda, Calif., ideally keeps cookline prep and cooking areas apart, for several reasons: 1) to limit the possibility of cross-contamination, 2) to allow for equipment that’s specific to either prep or a la carte service on the respective parts of the line, and 3) to allow the a la carte line to work without added cross traffic for prep.

This prep line might also contain some cooking equipment, such as a combi oven, a stockpot burner and a six-burner range so prep can continue through service. If space doesn’t allow for that, Scheiman says, put that equipment on the end “so the prep people don’t have to cross the entire line in the middle of service.”

Scheiman is a fan of French top ranges. If a restaurant has a heavy saute menu, he says, “it’s better to have French tops rather than burners because you can slide pans around, and can also use it for stockpots and you don’t have to be on top of it.” It also means you need less space for a hood.

Eisenbarth cautions strongly against adding equipment to a cookline that’s only used for one or two menu items. Instead, he advises eliminating those dishes, when possible, to enhance the operation’s efficiency. 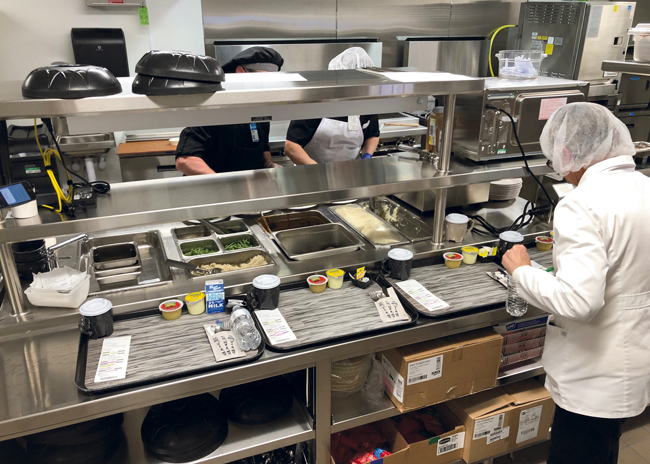 Most kitchen designers look to save employees steps when laying out a cookline design.

Cooklines are, by their very nature, compact, and no employee should take more than one step to either side, says Salvatore. “It makes it cramped and hot and narrow, but that’s what you need. It should be like a cockpit.”

Working a cookline is exhausting, so the more ergonomic and pleasant you can make it, the better, Salvatore says. Motions should be minimized, with nothing placed more than three feet above or below the chef. This way, the line setup becomes a series of workstations that are no more than 6 feet wide.

And think about equipment that makes sense for cookline employees, Salvatore points out. Steam tables have to be filled with a lot of water, then hot water has to be removed from them at the end of a shift. “That’s a back injury waiting to happen, never mind burns,” he explains. Instead, he says, get a steam table with a drain.

Think also about the temperature on your cookline. It shouldn’t be more than 80 degrees F, says Eisenbarth, or it’s too uncomfortable. Electric equipment enables operators to reduce heat, he notes, adding that he expects to see more induction ranges included in cooklines in the future. 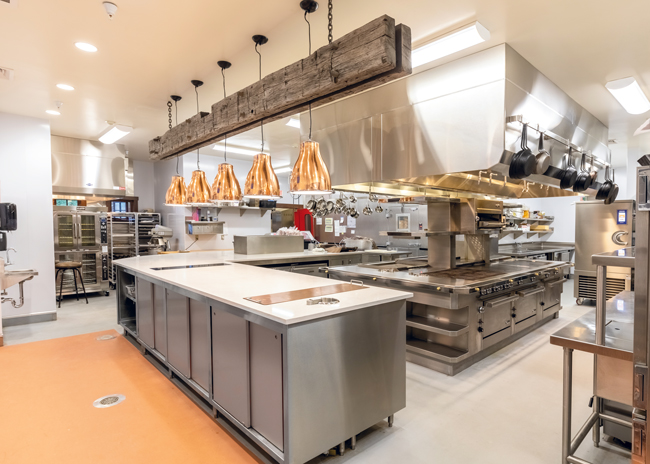 The best cooklines take advantage of all available space — above the waist and below.Another consideration in cookline design today is whether food will be served on- or off-premises. Food going off-premises had increased by around 20% in September 2021 compared to two years earlier, according to the NPD Group, and to handle this and keep it organized, many restaurants are adding — or enlarging — expediting stations at the end of their cooklines.

Having two expediting stations is a good idea, says Eisenbarth, “because it also helps you with your manpower. You’re built for the height of production, but as it scales down or coming out of COVID, the off-premises will decline slightly [so] you can gear up and gear down from a labor standpoint.”

Scheiman suggests adding some holding cabinets or hot shelving at the end of the cookline, which is a “game changer” for restaurants moving more into off-premises orders.

Store pots and pans above the cookline and keep a bin for dirties below so employees aren’t constantly running to a sink, says Salvatore. And ideally, choose a bin that is not plastic so hot pans don’t melt it. He likes to use an industrial-sized roasting pan.

Keep clean pans near where cooks periodically drop off their dirties, Eisenbarth says, so they can drop off and pick up in a single trip.

Storing plates above a cookline is a good idea, says Scheiman, because it keeps them warm.

Store prepped food in freezer drawers if space permits, but otherwise, Salvatore suggests using a low-boy refrigerator, which is a little lower than counter height and can also serve as an equipment stand. “Everything should be recipe-ready,” he says. “I don’t want to have to fabricate anything on the cookline.”

Equipment like salamanders, holding cabinets, speed ovens and microwaves can also be housed above the cookline, mounted on a wall like speed ovens or even stacked. But consider the height, Salvatore says, because cooks will be removing hot product from this equipment.

Below-the-waist space on a cookline is mostly used for refrigeration. “Put as much refrigeration as you can get into the line,” says Eisenbarth, who prefers refrigerated drawers over refrigerators with doors. Pizza prep refrigerators are a great addition to cooklines, too, because they have a larger and deeper refrigerated rail on the countertop, which doesn’t take up a lot of counter space.

Cookline cleaning is a necessary evil that has to happen at least once a day, so be sure to factor that into the design. Install utility disconnects so equipment can be moved out and cleaned without a lot of effort, suggests Eisenbarth.

“If you can facilitate that cleaning process into your design, it’s going to save labor hours and hopefully have people more likely to stay on the job rather than move to another place that does do it better,” says Eisenbarth.

To facilitate cleaning, Scheiman says all equipment should be on casters, so it can easily be rolled out, or it should have a curb, so the underneath doesn’t need cleaning. Curb mounting, he points out, is ideal, but it adds 15% to 20% to the cost of building out a 12-foot cookline. However, he adds, “when you factor in the amount of time not spent pulling the equipment out and cleaning under it, you have long-term savings.” 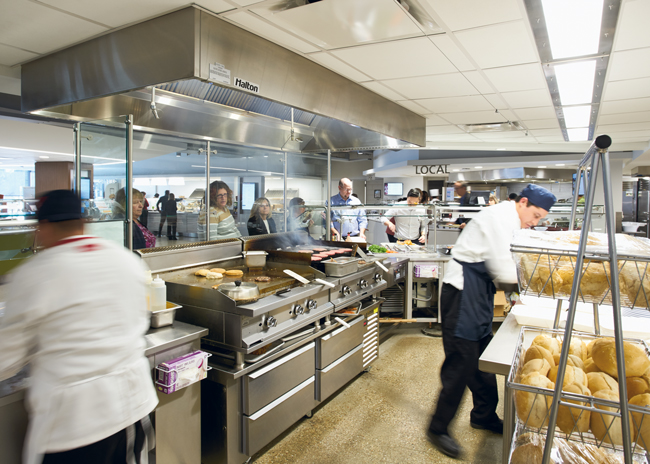 In the event the concept or menu are not yet completely defined, there are a few best practices designers can employ. At Next Step Design in Annapolis, Md., director Linda Callahan designs a lot of kitchens that are blank slates like this. “We try to design with extra power, extra gas, extra CFMs [cubic feet per minute] in the hood and extra drains in case they need equipment that needs those,” she says. “We try to design it so it has the most flexibility it can.”

In these situations, usually the kitchen dictates the menu, rather than vice versa, Callahan points out. The cookline typically features lots of storage space underneath using spreader cabinets as well as tubular shelving above. Her designs also include as much storage space as possible, so there’s a place for everything needed during operation.

Mistakes Callahan sees in cookline designs are when there is not enough flexibility.

It’s also important to place the cookline in the right spot in the kitchen so the food finishes up as close to the door to the dining room (or to-go pickup spot) as possible.

Ultimately, Callahan describes a well-designed cookline as “a very well-calculated dance. It’s like playing a game of Tetris. It’s all got to fit and work perfectly.”