Flexible design, a rethinking of service flow and multiuse equipment are all making headway in school foodservice programs. 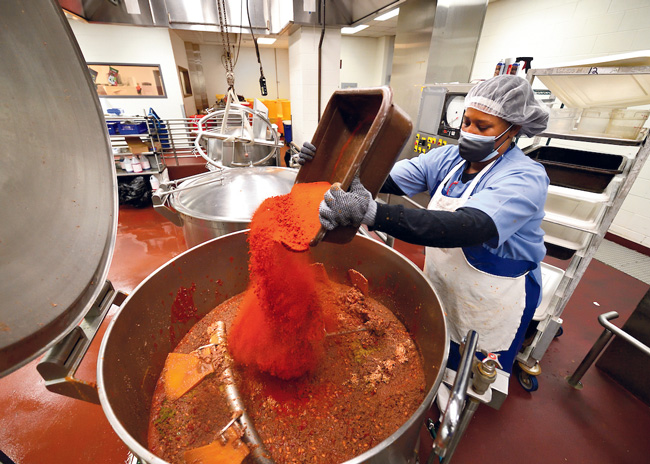 Big-batch items like chili are prepared at the commissary in this Kentucky school district, then shipped to the district’s 147 sites.

Rather, Jefferson County Public Schools prepare big-batch scratch items like chili, taco meat, dressings, soups and sauces at the district’s commissary and ships these items to the various school kitchens where staff add the final touches. For example, culinary staff at the commissary might make a pot pie filling and staff at the individual school will empty the cook-chill bag contents into a hotel pan, topping it with biscuit dough before baking the whole thing fresh. At the kitchen level, “we still maintain the flexibility to do inventive things so we’re not completely at the mercy of warming equipment,” Ellnor adds. On-site combi ovens help with that flexibility.

The central production kitchen consists of three main areas: the cook-chill operation, the bakery and a cold packaging area, in addition to the warehouse. The commissary has been operational for more than 22 years and to this day has provided significant labor savings for the district, Ellnor explains. “During the pandemic, it gave us a great opportunity to do a lot of things other [schools] couldn’t do. Initially we did cold meals out of the facility for all the students at home, but we changed all that over to a curbside pickup model later and at one point, offered a fresh fruit and veggie box through our produce vendor to keep them in business when all the restaurants were hurting.” 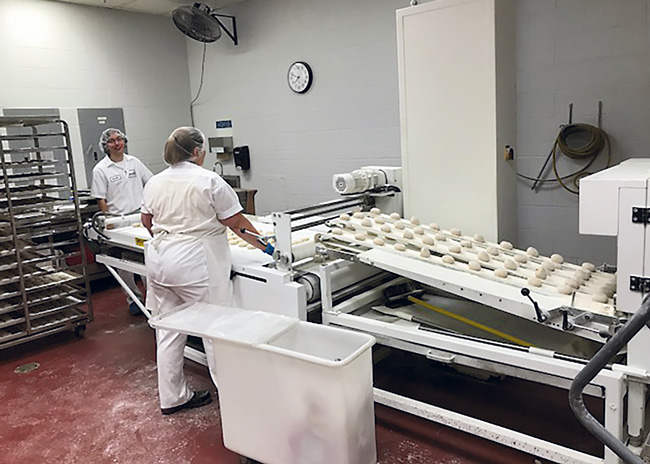 The 68,000-square-foot Nutrition Service Center serving Jefferson County Public Schools in Louisville, Ky., has a bakery with commercial-grade equipment and a dedicated staff of 26 making freshly baked breads, muffins and other products each day. The commissary is centrally located in Louisville in a district that’s about “20 to 30 minutes across by car.” The commissary’s location is a “sweet spot in delivery,” says Ellnor. “It doesn’t work as well in highly dense cities or very spread-out areas like Miami-Dade.”

The cook-chill area features 2,200-gallon steam kettles, along with a cook-chill tank, tumbler chiller and metered filling station “where we can bring everything to temp and conduct quality assurance tests, basically operating like a manufacturer, but we don’t need FDA approval because we essentially sell all in-house,” Ellnor says. He notes that they don’t freeze anything; all the refrigerated cook-chill products are sent to the schools within 20 to 45 days.

The bakery features 5 proofers, 12 convention ovens, a depositor and 60-quart mixers for making more than 11,000 muffins a day and other fresh products. The bakery even has its own staff of 26 employees. All the equipment throughout the space has electronic monitoring capability.

There’s allergen control throughout the commissary and at the school sites. The team uses an allergen control plan for food prep and follows FDA guidelines. “We have over 3,800 students with special dietary needs in the district,” says Ellnor. “We write some special clinical diets for kids, but for the most part, provide all of that information online so parents can look and see where the major allergens are and eliminate those items from the menu.” There are no open nut products anywhere throughout the kitchens, and all equipment that’s touched dairy products gets cleaned before nondairy prep.

The central commissary “affords us the ability to basically undercut direct distribution,” says Ellnor. “If we go through a broadliner we’re paying 15 cents on the dollar, but by going in-house, we pay 7 cents on the dollar with our fleet of refrigerated trucks.” Ellnor says they can also warehouse items that other schools might have trouble getting “because we can take in full truckloads.” It also allows Ellnor and team to stock up on product in the case of supply chain shortages, and they can work with local farmers because it’s a one-stop drop-off for them.

Centralized kitchens are top of mind for many school foodservice directors lately. “People are thinking they have to do things differently because of labor and transportation issues,” Ellnor says. “It’s time to take charge of the next mile. You may not have a 68,000-square-foot facility, but there might be an opportunity to go in with other districts and lease a bigger space to control that last mile. Pricing might come back around, but the labor situation — I think we’re in that for the long haul. Now seems to be the time to invest in infrastructure and equipment.”

Looking for more? Check out these articles: