In fast-casual pizza restaurants, the makelines play a starring role. In these areas staff directly interact with customers, while making pizzas and providing some low-level entertainment. The pizza remains in the spotlight from start to finish, and for that reason a well-designed makeline plays an essential role in any show-stopping performances.

Any design and equipment choices must support speed and efficiency. “It’s all about motion — getting employees’ movements where it makes sense and it’s as compact as can be,” says Jay Bandy, president of Goliath Consulting in Norcross, Ga. “It’s also about having the make area and the bake area and the finishing area in concert with each other. It’s that flow and touching the customers where you need to.”

In a perfect world, a makeline employee doesn’t have to take any, or many, steps, says Victor Cardamone, president and CEO of Mise Designs in Williamstown, N.J. And ideally, that makeline is a straight line, measuring 20 to 30 feet long.

Scalability is critical too. Operators need to be able to add and reduce staff as sales volume dictates, Bandy adds. 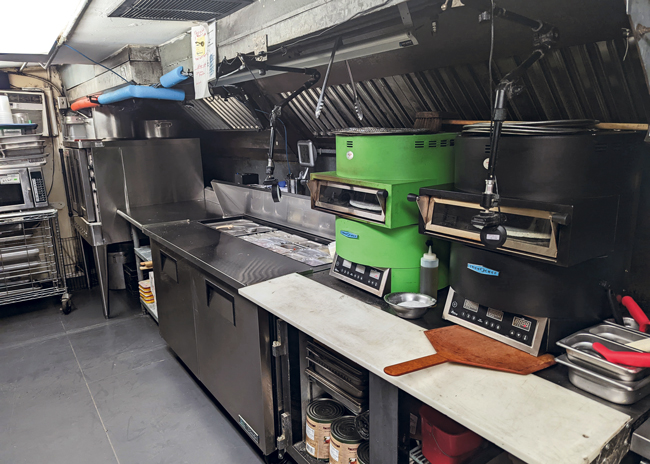 All fast-casual pizza operations begin with dough, either being made or stored. Operators often keep the dough at room temperature and have staff either hand-stretch or machine-press it. Many operators keep the dough balls visible to show that the restaurant makes them from scratch. Occasionally, though, guests get a glimpse of the dough balls through a window into the back of house, Bandy points out.

Pizza Guys, based in Sacramento, Calif., has 2 tables for the dough in each of its 70-plus stores. It’s essential these tables are exactly the same height as the rest of the makeline, says Mike Morgan, director of operations, so the dough can simply slide over to the remainder of the makeline. Sometimes he even removes the casters from tables to adjust their height or adds to the legs. The first table is where dough goes into the dough roller; it then slides over to the second table, which is 60 inches wide, for sauce and cheese.

Pizza Guys’ restaurants have makelines that measure either 93 inches long or from 114 to 119 inches long, depending on the location. The tops of the makelines feature all the prepped ingredients staff use in making pizzas, and underneath is storage that holds more prepped toppings.

It’s important to store backup toppings on the makeline, Morgan points out, because if staff have to run to the kitchen several times a night, it can impact their productivity. “It’s a big thing for us to be progressive,” he points out. “It’s much better to do more prep in the morning than add time in the evenings.”

At the far left end of the makeline just before the ovens, Pizza Guys has two refrigerated drawers. These are also the same height as the makeline, which means the restaurant can extend this area during busy times. These drawers contain lesser-used toppings such as feta and Gorgonzola cheese. 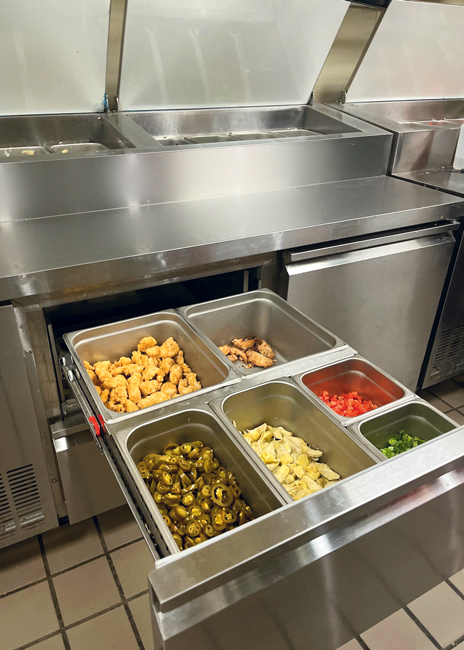 Two refrigerated drawers at the end of the makeline at Pizza Guys hold lesser-used toppings.Including these drawers prevents employees from bending down to retrieve unusual ingredients in the cabinets under the makeline, which takes much longer, Morgan says. The concern is that during busier periods staff might leave these less-used toppings out — unrefrigerated — on the makeline. This can disrupt the flow and introduce potential food safety issues when not addressed quickly. With the drawers, staff simply open the drawer, take some toppings out of a container and then close it again.

At the end of the makeline, says Cardamone, there should be a staging area if employees top the pizzas faster than the ovens can keep up. A speed rack can hold uncooked pizzas, he notes.

Mici, a Denver-based chain with six locations, uses a sandwich prep station with a larger top, which enables employees to have all toppings within their reach. Before this equipment was introduced, employees had to open drawers and bend down a lot. They “were wasting motion,” says Joe Melton, senior vice president of operations. “But I love ease of execution and motion. We want to make it as simple as possible.”

Within the prep table, staff at Mici lay out toppings depending on which pizza they’re for, meaning all ingredients are in small groupings so employees can take the required amount of each with minimal movement. The Giardino pizza, for example, has mushrooms, garlic, roasted red pepper, spinach, artichokes, and zucchini, grouped together. Likewise, ingredients for the Caprarola are also all in one place: pepperoni, sausage, onion, mushroom and green pepper. Items that are featured on more than one pizza, such as pepperoni, will be adjacent to all the pizzas they’re included on as much as possible.

This design also includes two containers of commonly used items like sauce, cheese and pepperoni so two employees can work the line without leaning in front of each other, though usually one deals with sauce and cheese and another with
toppings.

Show Me Pizza, which has two locations in Austin, Texas — one of them a ghost kitchen — launched last spring using traditional sandwich prep containers for its pizza toppings. The company quickly switched them out for longer sandwich prep containers, 4 feet long in one location and 5 feet in the other, which makes a longer runway for pizzas to be prepared concurrently. These hold the same amount of product but create space for more pizzas to be prepared simultaneously.

The newer prep tables are longer and shallower “so it’s easier to reach the ingredients so you’re not reaching over the pizza and possibly destroying it,” co-owner Dimitri Voutsinas explains. “It’s also great for people who are not as tall.” Sandwich stations are usually quite a bit less expensive than pizza topping stations, he points out.

A short makeline also helps eliminate the need for employees to jump from position to position since everything is within reach. And, overall, shorter makelines tend to require fewer employees. During quiet times it also means Show Me can cut its employees, and the remaining employees still don’t have far to move.

To design the makeline, Voutsinas says he looks first at where the pizzas start and finish and where is the most efficient place to send pizzas out to guests and delivery drivers. “I then fill in the space in between, working backward and filling the space to make it as tight as possible.”

Voutsinas changed the design of his line three times before opening, finding that an L-shape and a square didn’t work. He opted instead for a linear makeline.

Pizza Guys always features a straight makeline if possible because with L-shaped lines, “you have a dead spot because someone will stand there,” says Morgan.

If operators can’t squeeze in one long makeline, Cardamone suggests parallel lines so employees are back to back, because right angles are “a dead corner that don’t generate revenue.” Plus, speed comes along with a straight line, he points out. “You can have more people side by side — each person has a task, and they have space to do it. They’re like robots, and they’re going as quickly as they can.” 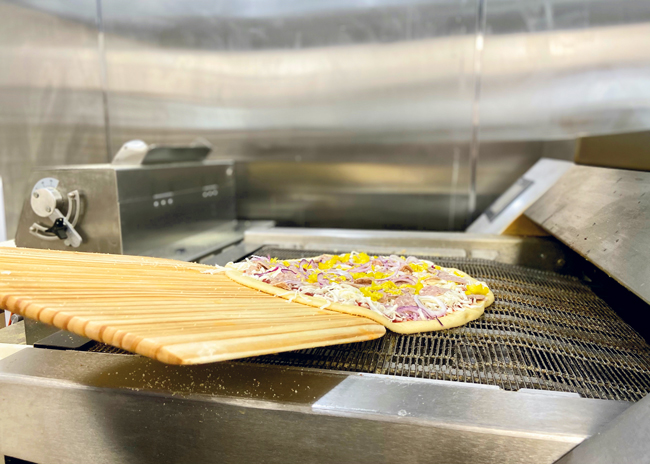 Staff at Mici’s can cook 124 pizzas per hour with its conveyor oven.

Mici’s Melton swears by his conveyor ovens, which can handle 124 pizzas an hour. The ovens feature stones heated from above and below so they never cool down. Pizzas cook in five minutes.

Show Me Pizza uses electric pizza ovens. “They’re more efficient and consistent, which is the key to having a successful fast-casual pizza restaurant,” says Voutsinas, who shares that Show Me Pizza can cook a pie in 90 seconds. In his view, electric ovens “eliminate the user error of the wood-burning ovens. The staff doesn’t need extensive training or previous knowledge of how to run a wood-burning or coal-burning oven. You have to get it off the paddle, then press a button, wait for 90 seconds and it’s ready.

“It really tightens up your staff,” he adds, “because you don’t need a person just to run ovens.” Currently Show Me Pizza has two ovens in each location, though the company may expand to three.

After the ovens, Pizza Guys has a heavy-duty cutting table, 72 inches wide by 30 inches deep. This is split into two sides, one for cutting pizzas and one for putting them in boxes. The design of this station allows it to work well with one or two employees, depending on volume.

Ideally, at the finishing table, operators are able to store boxes above and below the makeline, says Bandy. In a typical pizza shop, he points out, boxes are all built for the day, “but in the fast-casual environment you might be building them a couple of times a day so you don’t have to worry about where to store them all.”

A nice workaround, Bandy points out, is to use the boxes as decor, providing a pizzeria feel. “They can be put on a wall because they stack so symmetrically that it can be a branding cue.”

The perfect makeline for a fast-casual pizza operation may not happen in many locations, but the more elements of an ideal design that can be added in, the more successful operators are likely to be. “Every time you have to alter that circumstance, you slow down your capacity,” Cardamone explains.