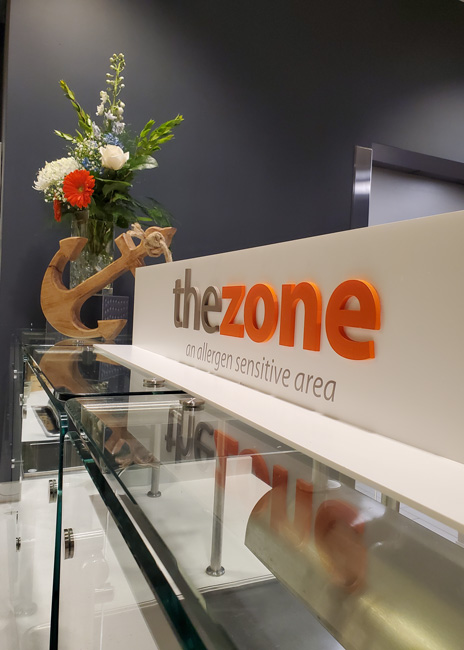 Images courtesy of Hope College“We initiated the concept several years ago and have seen its growth not only from a culinary standpoint, but also in terms of its necessity for our students,” Zehr says.

The Zone, which functions as a segregated cooking/prep/serving station within Phelps Dining Hall, complete with segregated plateware, servingware, color-coded (purple) chopping boards and prepping supplies and its own designated prep cooks. Some of the cooking for The Zone does happen in the shared back-of-the-house space, but only by those designated Zone prep cooks, with sanitization happening before and after cleaning.

The Hope College dining team uses allergen icons across campus dining for easy recognition of allergen-friendly items. The menu at The Zone isn’t just a plate of plain, grilled chicken and some steamed veggies on the side to avoid the use of top eight allergens (milk, eggs, peanuts, tree nuts, fish, shellfish, soy and wheat). Rather, the menu design “mirrors the variety we’re serving on the main hotline as much as possible,” Zehr says.

For example, if there are pancakes on the main hotline, there will be an allergen-friendly version in The Zone. Entrees might include a turkey Bolognese using corn-based spaghetti, Peri-Peri or jerk chicken, Paleo-inspired barbecue pork ribs, roasted squash and other seasonal vegetables, fresh-sliced, house-roasted beef, pork chop suey, honey-glazed carrots, spicy Singapore noodles, sticky wings, and much more, all developed with the same culinary attention as the main menu.

The only difference at The Zone — aside from not using any of the top eight allergens — is “we don’t heavily season the food, and we only cook with extra-virgin olive oil at this station,” Zehr says. 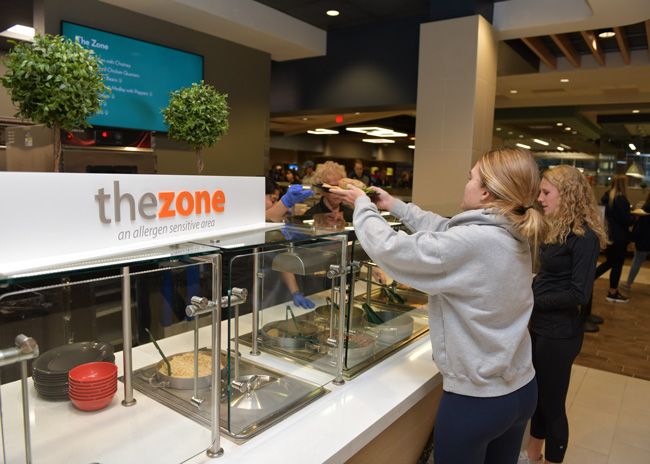 The Zone has been so successful, Zehr says, that even non-allergen students are drawn to food from the station because of its options and perceived “clean” ingredients. All non-Zone food is still labeled to include any potential allergens.

Intentions for The Zone were clearly detailed in a renovation plan for Phelps Dining Hall, which reopened for students in the fall of 2014. “When we renovated Phelps, The Zone was already being conceptualized,” Zehr says. “The original dining hall did not have segregated areas to allow for this, so we had to include it in all the designs.” 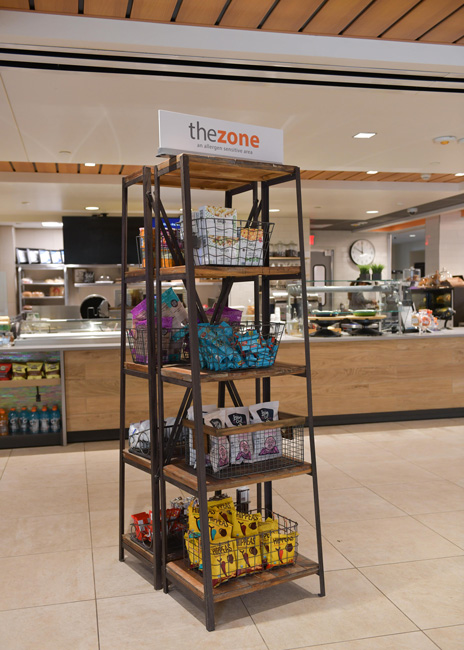 The Zone, in addition to using separate, color-coded or clearly marked equipment and supplies, also features some small-scale and ventless cooking equipment, such as induction burners and small griddles as well as hot/cold wells and hot boxes, its own handwashing stations and its own cold and dry storage systems using reach-in refrigerators and shelving. “We wanted to ensure the integrity of the station as an allergen-sensitive zone,” Zehr says. Even the designated prep cooks for the station are ServSafe-certified and allergen-certified. “Any cross-utilization of the main kitchen is done very carefully and everyone is fully aware of the importance of maintaining the integrity of The Zone.”

Zehr says the servery itself is not designated as completely allergen-free because it’s not controlled for environmental allergens, but this is clearly communicated to the most allergen- sensitive and ingredient-intolerant students. As for the physical location of The Zone, Zehr says the plan was to design it to be an integral part of the servery, not segregated in a far-off location to avoid ostracizing allergen-sensitive students.

“The way Phelps was designed was with the student experience always in the forefront,” Zehr says. “There are some campuses that segregate [allergen areas], and often that’s not out on the main floor. We wanted our students to be able to move freely and pick and choose and still be part of the overall population and not feel as if they had a spotlight on them or that they had to dine any differently.”

Still, The Zone has designated entry and egress such that students move through like a one way street and there is no self-service. Staff hand all food to students at this station to prevent any cross-contamination.

Any food items for The Zone that must be stored in the main kitchen’s coolers and freezers are very clearly labeled, says Zehr. There are also separated workspaces for Zone prep cooks to use because of the kitchen’s spaciousness. When it comes to the dishwashing, all Zone supplies are labeled, color-coded or follow the same style so it’s easier for dishwashers to keep those separated. Staff package food for retail outlets from The Zone using segregated packaging that’s clearly labeled, or those allergen-friendly products come straight from an off-site manufacturer.

“Part of the success of The Zone is the awareness of our employees and the understanding how critical it is that this station follow strict protocols,” Zehr says. “No one cooks in The Zone if they are not with the station and there is no altering of those recipes because at the end of the day, our students health and wellbeing is our No. 1 focus.”

Zehr continues: “This is our students’ homes and we have the privilege of serving them in their dining room, so we find it’s extremely important to give them the attention and care they would give themselves or their families would give them.”