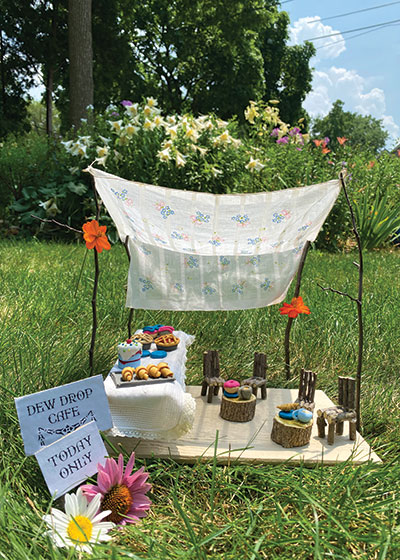 Traditional operators have had to become creative to try to stay afloat.

In the small town of Varmland, Sweden, the coronavirus pandemic led to the creation of a unique pop-up restaurant. Called Bord For En, which means Table for One, the pop-up consists of simply that — a table set for a single diner in the middle of a meadow. One diner a day, served a three-course meal delivered by basket down a cable wire (no waitstaff involved) and a pay-what-you-want system.

Such is the restaurant industry in 2020. Traditional operators have had to become creative to try to stay afloat, while restaurateurs in nontraditional spaces such as airports, stadiums and parks have found themselves hamstrung by the effects of quarantines and stay-at-home orders.

One of the areas most hard-hit by the pandemic belongs to the niche players who operate pop-up restaurants as the mainstay of their business. Chefs such as New York’s Omar Tate; Oakland, Calif.’s Solomon Johnson, and the women who operate Vegan Hood Chefs in San Francisco, Ronnishia Johnson and Rheema Calloway, had to either place their pop-ups on hold or dramatically downsize them as the coronavirus shut down their communities.

Solomon Johnson, who owns a pop-up and catering company called Omni World Kitchen, almost lost his business after several clients had to cancel events they had planned in his space. The chef had to refund more than $12,000 in deposits to clients.

“After doing that, I was sure I was going to have to close,” Johnson says. “I applied for a PPP loan, but I was turned down. Fortunately, Kiva loaned me enough money to stay in business while we ride out the pandemic.” Kiva, a San Francisco-based nonprofit organization, specializes in loans to underserved businesses and communities through crowdfunding and other means of capitalization.

Ray Camillo, founder and CEO of consulting firm Blue Orbit, says pop-ups can be dicey propositions in the best of times. He fields queries from interested parties “all the time” and notes the tough part is finding operators who are serious. “The economics is the most difficult part,” Camillo explains. “A pop-up must be so compelling that people are drawn to it, so you can make a profit. You need to have a platform or a hook. And you can’t really do it without a presence on social media.”

The pandemic simply exacerbates the challenges that pop-ups face, Camillo adds. “Economically, right now, you should be able to find a space. But then you still have the same challenges traditional restaurants face with COVID-19: social distancing, cleaning and sanitation, and other health department rules.”

Even the relaxing of rules regarding pop-ups, such as what has happened in San Francisco, hasn’t helped to spur their creation. According to Veronica Vien, spokesperson for the San Francisco Department of Public Health, “The EHB Food Program is temporarily allowing licensed bars that do not operate a kitchen or food preparation facility on the premises to partner with licensed food facilities to sell bona fide meals in conjunction with alcoholic beverages. To provide support to businesses that have been impacted by the stay-in-place order, we are temporarily waiving its pop-up fees and the allowable days of operations.” Still, few new pop-ups have opened in that city during the pandemic.

While many pop-up operators have had to place their businesses on hold or drastically pare them down, a few restaurant companies have seen pop-ups as an alternative to full-on closure, either as a way to keep at least some staff members employed, or in order to remain relevant in the midst of the pandemic. The difference? They’ve operated with take-away or delivery as customers’ only options.

For example, Carbone’s, the well-known Italian restaurant in Manhattan’s East Village, opened a pop-up this summer in the Hamptons area at the tip of Long Island because that’s where many of its regular customers were staying while they followed New York’s stay-at-home order. Carbone Hamptons was set up as a take-away-only operation out of a building in Southampton, offering the same menu as its Manhattan location.

Other companies have had more humanitarian motives for organizing a pop-up. A prime example is Montclair Hospitality Group, the New Jersey operator of six Ani Ramen House restaurants in northern New Jersey. According to Kevin Cox, director of development for Montclair, the effort grew out of a giveaway precipitated by the coronavirus.

“On March 16, we had to close all six of our restaurants,” Cox explains. “We realized that all of our food would go bad, so we organized a community giveaway. We ended up making and distributing 15,000 meals. It felt great, building community like that. We decided we wanted to do more.”

Rock City Pizza Co.But there was one small problem, he adds. Ani Ramen House makes all of its ramen dishes from scratch and, Cox notes, “they don’t travel well.” So, Montclair created two pop-ups, one a pizza concept called Rock City Pizza Co. and the other a Thai chicken restaurant called Bang Bang Chicken. The company partnered with an organization called #BeAwesomeToSomeBody to create a 501C charity. They sold pizzas and chicken dishes at cost, enough to pay the employees who were brought back and to donate money to first responders.

However, because Ani Ramen House doesn’t do pizza or chicken, Montclair had to invest in equipment and training. Operating out of two restaurants, one in Maplewood and the other in Summit, the company purchased two pizza ovens and two rotisserie ovens, at a total cost of about $40,000 and then trained staff in the finer points of making pizzas and rotisserie chicken. “We’ve gotten a great response,” Cox says. “We got a lot of good press, and our customers loved that we did something so radical.” The pizza ovens won’t go to waste. The company plans to open a brick-and-mortar pizzeria in the town of Montclair. 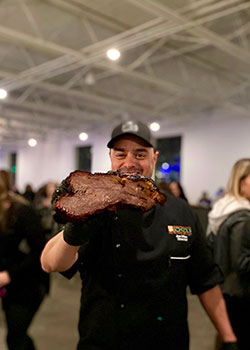 Culinary specialist Brian Hickey shows off a beef brisket prepared in Greenville County Schools’ mobile smoker.Noncommercial operators also have tapped into the pop-up idea too. For example, Greenville County Schools in South Carolina has used the pop-up idea to bring some excitement to schoolchildren kept out of school by the pandemic. Like most school districts around the country, Greenville Schools has continued to provide meals to students and, sometimes, families.

Last year, Joe Urban, director of food and nutrition services at Greenville County Schools, purchased a mobile smoker and created a barbecue pop-up as a way to test potential menu items for the 101-school district.

“During normal school operations, our catering and BBQ team will often do pop-up takeover events at schools during lunch service,” Urban explains. “We use these unannounced events as testing for new recipes to ensure that the items have a very high acceptability rating with our students. Items can include anything from plant-forward recipes to full-blown BBQ experiences using beef brisket and pork ribs, and everything imaginable in between.

“Since the COVID-19-related school closure, these pop-up events have looked much different. Our catering and BBQ team will take over one of the school operations responsible for emergency feeding efforts and will prepare a number of different sandwiches, including smoked chicken and smoked turkey, and smoked chicken wings. These items are combined with other required USDA food components to provide free meals to children 18 years and younger as part of the USDA Seamless Summer Option.”

One difference between Greenville’s pop-ups and a more traditional setup is where they happen. “Whereas most restaurant pop-up events generally occur in nontraditional spaces, ours occur in our normal operations, just focusing on out-of-the-ordinary menu items for a school foodservice program,” Urban said. “We have huge, fully equipped kitchens, mobile smokers, and two fully equipped food trucks that we use for our events. So, we are not dependent on any specific equipment needs to develop menus. Instead, we menu whatever we may be inspired to do at any moment. Generally, these are items that we hope to incorporate in our school menus in the upcoming months.”

However, the pandemic has affected the menu mix for Greenville’s pop-ups. “Based on how we are forced to serve food now during COVID-19 — boxed or bagged to-go meals only — we are really confined to doing really good and unique sandwich offerings,” Urban notes. “What we cannot do would be some of our more popular items like shrimp and grits and fresh-made pasta.”

While the restaurant world may seem a little topsy-turvy, operators and consultants are confident that pop-ups will play an increasingly important role in the industry in the coming months. Solomon Johnson believes that as cities ease restrictions, pop-ups could be the perfect interim step.

“People want to get out and eat,” Johnson said. “But they may not want to go to places that seat dozens of people. So, pop-ups such as mine might be seen as a great option; smaller gatherings where social distancing might be easier to do.”

Camillo agrees. “As we come out of this pandemic, pop-ups have great potential to offer a segue to full restaurant operations. I think we’ll see more of these concepts as time goes on.”