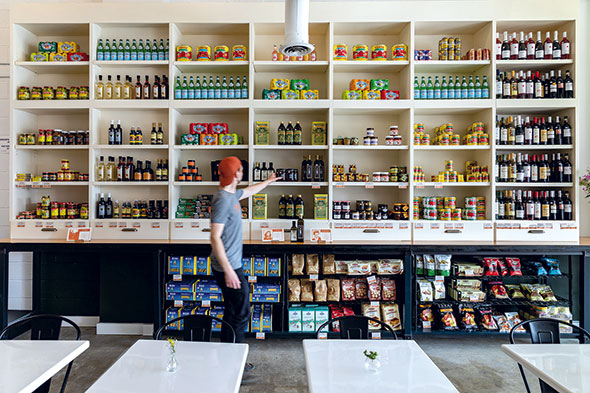 A number of operators have shifted their business models to at least temporarily include meal kits and pantry items in an effort to increase revenue. This follows a trend that was in full bloom prior to the pandemic. By 2022, research firm Statistica expects the meal kit market to more than double, reaching $11.6 billion dollars. In the last half of 2018, 14.3 million households purchased meal kits, up from 3.8 million households in 2017.

As restaurants and other foodservice providers pivot to provide staple items as an option with takeout orders, as well as take-and-bake meals, equipment plays a role in execution.

When Amber Ox Public House converted to takeout only, it started offering family meals. Two weeks later, the Williamsburg, Va.-based restaurant added take-and-bake options, as well as grocery items, to the mix. “In addition to offering meats, eggs and other grocery items from our vendors to keep their product moving, we converted our menu to add take-and-bake prepared food, like chicken pot pies and ricotta gnocchi and wild mushroom casserole,” says general manager Joe Veltre.

The reconfigured takeout menu now includes family-style meals; a market menu with prepared foods, local meat and eggs, bread and pastries; take-and-bake items; and cocktails to go. “We still have our full kitchen open, using all the heavy equipment we have, with half of the restaurant set up as an assembly line,” Veltre says. “Take-and-bake items are assembled in the prep area, where they’re sealed and packaged.”

The bar area was rearranged to hold additional coolers from the kitchen. Staff use stand-up heat-sealable pouches for to-go cocktails. In addition, the restaurant uses a hot box from one of the co-owners’ other restaurants to hold food outside for customer pickup.

“Our idea for a pantry was due to us sitting on a bunch of inventory and seeing empty supermarket shelves,” says Kronfli.

“According to the county public health guidelines, we can’t vacuum seal proteins ourselves and sell food as singles,” Kronfli says. “We had one vacuum sealer but bought an extra machine for added efficiency.” In addition, he purchased two large reach-in refrigerators and three chest freezers. “Right now, they’re in the middle of our dining rooms, which have been converted into packaging warehouses.” 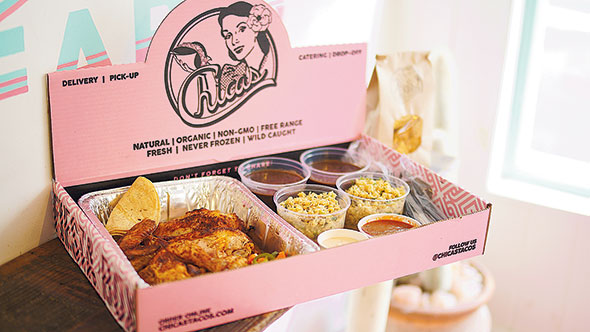 Chica TacosFrom an equipment standpoint, it’s the vacuum sealing machine that’s getting the biggest workout at Chicas Tacos’ two open Los Angeles-area locations. The company closed its other two sites temporarily and still hopes to open a fifth store this winter. The sealed packaging helps preserve the life of everything from salsas, to cooked meats, notes Chris Blanchard, co-founder and president. The packaging system also has been instrumental in helping chef Eduardo Ruiz create a meal kit menu that combines shredded beef, rice, beans, tortillas and salsa. Staff package the taco meal in servings for two, four or eight. They also use the vacuum sealer to package an eight-piece chicken dish with cooked rice, beans and tortillas.

“Our Fiesta Box is 2 feet long by 1½ inches deep by 4½ inches tall and can fit either a half or full disposable sheet tray,” says Blanchard. “We’re also using deli containers, which provide a nice presentation.”

The chain’s newest store in Culver City, Calif, includes a 2,200-square-foot kitchen, which has proven “the perfect format for our assembly line,” says Blanchard. Staff use existing walk-ins and dry storage areas for goods. He adds that meal kits and large orders will continue to be part of operations — and future locations — to make up for the in-store dining loss.

EVO in Scottsdale, Ariz., has shifted focus to pantry items and launched Evo Market, which includes grocery items alongside a limited lineup of prepared foods, such as a pan of homemade lasagna that serves four. To accommodate the change in service, staff relocated shelving and speed racks to the dining room to store dried goods. Walk-in coolers store vacuum-packed fish and meat. “We already were using vacuum sealing machines for sous vide, so we repurposed these and reconfigured our storage,” says owner Nick Neuman.

“We haven’t had to supplement our equipment but are now utilizing a walk-in beer cooler for food storage,” Neuman says.

Since the stay-at-home orders were put in place, Rocco’s Italian Deli in Detroit reorganized the shop to more easily fulfill grocery, take-and-bake and traditional menu orders, which include sandwiches, soups, salads and sides. “We’re storing nonperishable items [i.e. kitchen staples like olive oil, canned tomatoes, flour, and the like] on our merchandiser as well as behind the counter and on our tables, so it’s easier for our team to pack up grocery items and run them out to our customers,” says co-owner Gabe Guido. “We’re storing perishable items [i.e. take-and-bake pastas, house-made marinara, olives, meats and cheeses to go] in refrigerators. Because we’re not selling as much pop, we’re using some of that refrigerator space to store take-and-bake pastas.”

Reprioritizing and redistributing the 1,400 square feet of available restaurant space for meal kit and pantry prep has been the focus at Voyager in Ferndale, Mich. New menu items, such as a smoked salmon BLT and clam spaghetti, are available, along with a long list of provisions such as fresh and prepared fish and seafood and grocery staples like bread, pasta, fresh produce and toilet paper.

“We didn’t bring in any new equipment, but as a table/bar service restaurant transitioning to a curbside/grocery model, we had to source plenty of disposables,” says owner Eli Boyer.