The American consumer never seems to grow tired of that irresistible combination of bread, cheese and sauce. These days, pizza styles reflect specific regions, places or traditions, with a greater emphasis on dough.

It’s All About The Dough 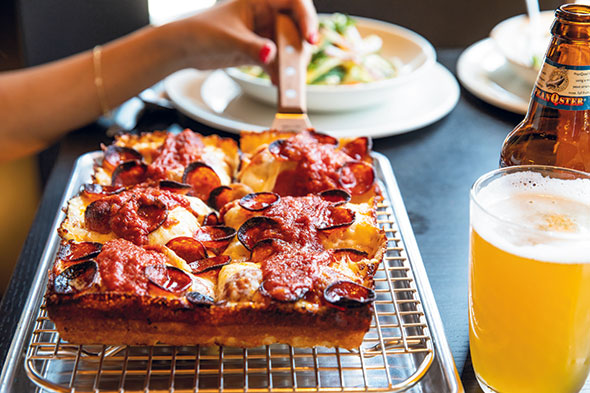 Union Pizzeria’s pepperoni pizza More chefs and pizza makers these days are getting really serious about their dough, using sourdough methods to rise the pies and sourcing local, regional and artisan flours that are freshly milled before each use. Chris Bianco of Pizzeria Bianco in Arizona has long been ahead of the trend. He has been sourcing fresh flour from smaller, stone-ground millers for two decades. The millers, in turn, source American- and sustainably grown grains to reflect the flour’s “terroir,” or taste of place, just like wine. Black Star Farms’ Hearth & Vine Cafe in Suttons Bay, Mich., also uses a specialty dough that starts with flour made from the skins of grapes grown on the property.

Additionally, chefs are also experimenting with better-for-you doughs, including crusts made with gluten-free, ancient/whole wheat grains, cauliflower and even byproducts from beer to infuse more flavor and texture into the dough. 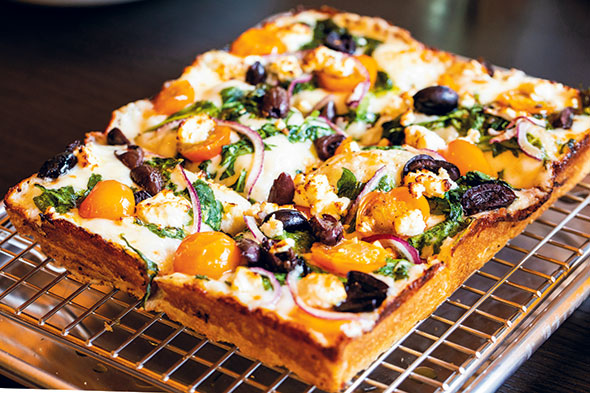 Detroit-style pizza consists of slightly proofed dough, which the pizza maker then sets in well-oiled or buttered, rectangular cast iron or metal sheet pan. Ingredient toppings start with a slightly sweet red sauce and include a blend of mozzarella and brick cheese with parmesan dabbed around the edges to create a signature, crispy-caramelized crust and bottom. The pizzas generally bake in a high-heat deck/convection oven and are cooled on wire racks before being cut into the signature Detroit-style squares.

When in Rome, consumers order pizza al taglio — pizza by the cut, or slice — and pay by weight. This variety of pizza typically features a blend of flours for a lighter, fluffier dough that’s baked in a rectangular cast iron pan or a sheet pan. Wooden boards commonly display the pizza before it’s cut — often with scissors — into a customer’s desired size. Triple Beam Pizza in Los Angeles follows this authentic approach and cuts pizza slices with scissors then uses a scale to weigh each slice to determine the price; a typical slice weights 4 ounces. Similarly, Rock Pizza Scissors in New York also slices its pizzas with scissors after the pies bake in a stone deck oven.

While Roman-style pizza may still be awaiting its menu breakthrough at restaurants stateside, it has already earned a health-conscious twist at Casati’s Pizza Vino in Chicago. Owner Stefano Casati describes the restaurant’s “Pizze di Pinsa” varieties as next-gen pizza, or a “smarter Roman-style pizza.” The origins of Pinsa flour date back to ancient times, although techniques have changed over the centuries. Pizza Vino’s Pinsa-style dough consists of a blend of lower-gluten soy and rice flours with traditional wheat.

Gabriele Bonci, the brains behind Pizzarium in Rome, Italy, now serves his Roman-style pizza al taglio — pizza by the cut, or slice — in Chicago and plans to open another location in Miami this year. To make the dough, Bonci starts with a blend of stone-ground heritage flours from Italy, then lets it rise for 48 to 72 hours. The end result is a slightly thick but light, airy and crisp base. Toppings vary and combine ingredients such as fresh sheep’s milk ricotta with zucchini, and prosciutto cotto and leeks. He uses rectangular, cast iron pans in a high-heat convection oven to bake the pizzas, presents them on wooden boards and slices the pizzas in squares. 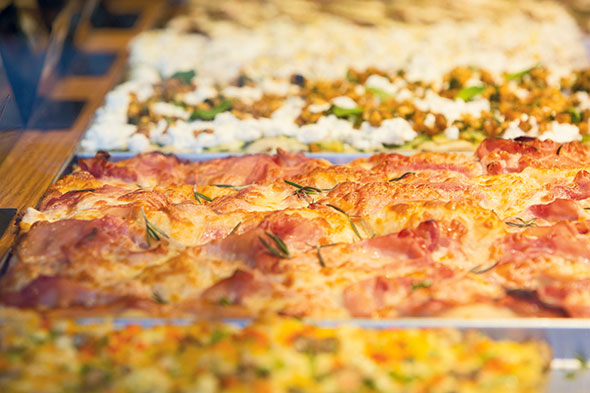 This “love it or hate it” pizza features a yeast-free, cracker-like crust that’s typically spread with an oregano sauce and then layered with toppings and the style’s signature Provel cheese, a processed cheese blend of provolone, swiss and white cheddar.

St. Louis-style pizzas are traditionally baked in gas-fired, high-heat deck ovens. Pies are then cut party-style into small squares. One local chain known for its St. Louis-style pizza is Imo’s Pizza, which includes nearly 100 stores and uses conveyor ovens for its pies.