The sports bar segment ups its game with more high-end menus and trendy cocktails to entice customers to stay after the games end.

Rather than catering to a mainly male, sports-obsessed clientele, many sports bars of today continue to evolve: into dinner destinations, family gathering spots and places where girls’ night out is just as common as a boys’ night.

Take Buffalo Wild Wings, for example. Not only do customers gather for playoff games for various sports, these locations often become a destination for local kids’ sports teams to celebrate games or a season.

The tavern and bar segment generated $19.8 billion in 2017, per the National Restaurant Associaton’s 2017 State of the Industry Report. This is a 2.5 percent increase compared to 2016. 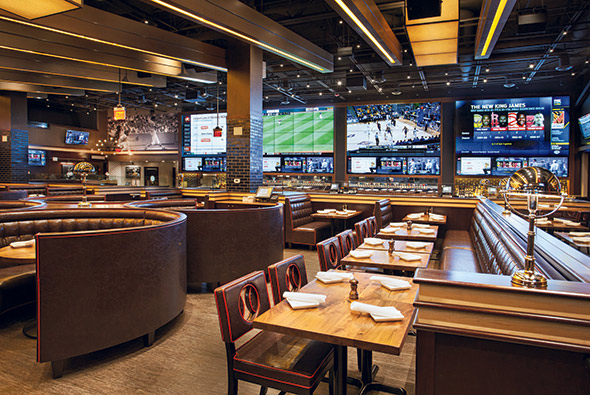 According to Chicago-based CHD-Expert, there are 1,218 operations classified as sports bars in the U.S. Roughly 230 are small, local establishments with revenues less than $500,000 annually, while only 1 location reported yearly revenues between $2.5 and $5 million. One hundred and sixty sports bar locations report annual revenues between $500,000 and $1 million. The report listed Texas as having the most sports bars of any state, with 126, followed by Florida with 95 and California with 83.

In today’s competitive foodservice climate, sports bars that stay up to date on audio/visual trends and technology tend to grab consumers’ attention.

“After all, people go to sports bars for a bigger experience than they can get at home, and that includes a broad choice of beer, food and bigger screens for maximum viewing,” says Douglas DeBoer, CEO at Rebel Design+Group, Marina Del Rey, Calif. “There is new technology today being developed for sports bars that specifically allows customers to tune in to the game on their smartphones, so they can hear the commentary without the aural conflict of multi-TV game noise in a bar.”

One big change in recent years is that large sports franchises like the National Football League have updated their broadcast packages available beyond a team’s local area. This scores big points with sports bars.

“It has become a big driver for sports bar business that fans all over the country can visit sports bars to view games that they can’t watch in their own homes,” says DeBoer. “Sports bars that subscribe to such network packages, whether it be NFL, NBA, NHL, NASCAR or other sports, ensure customers come back on game days.”

The sports bar segment represents an example of how business trends contribute to a combination of customer expectations, advances in technology and consumer awareness. “Today’s consumer is savvier than 10 or 20 years ago,” says DeBoer. “Sports fans are particularly loyal, whether it be to their favorite sports team, beer or ritual food, and are always seeking a new experience or something they cannot get or afford at home.”

Billiards and darts remain a big part of a sports bar offering, but these venues now offer trivia nights, games like table hockey and foosball, and in some states slot machines and the opportunity for gambling.

Kenneth Lovi, director of restaurants for RMD Hospitality Group, based in San Diego, notes several distinct changes in sports bars, starting with its customers. “Over the course of time, I’ve seen customers becoming more sophisticated,” he says. “Looking at sports bars 10 years ago, frozen food came out of a box and was fried. Now customers want handmade burgers and to know where the meat came from. They want buns from the local bakery, along with craft beer, better alcohol, upscale decor and a place that is more diverse with a lounge feel.”

Like in other restaurant segments, sports bars continue to seek ways to offset labor costs, including the role technology can play. At RMD’s locations, customers can order and pay tableside through a handheld device that connects to the restaurant’s point of sale system. “As minimum wage continues to go up, technology is being implemented at a quicker rate to offset this amount and still provide guests with a good experience,” says Lovi.

“We need to weigh the benefits and cost, since every new technology has a consequence,” says Lovi. “The impact will be on the ability for servers to upsell and encourage more food and drink orders. Customers can be influenced by servers, but not by a computer, so it’s important to weigh the pros and cons. With sales potentially lower, is reducing labor costs worth it?”

In 2014, Tony C’s opened its first location in Somerville, Mass., as a concept celebrating Boston’s sports history. It now has four locations, with one more on the way. The 500-seat sports bar includes a large television over the center of the bar and televisions every 5 to 6 feet totaling more than 100 in the space. 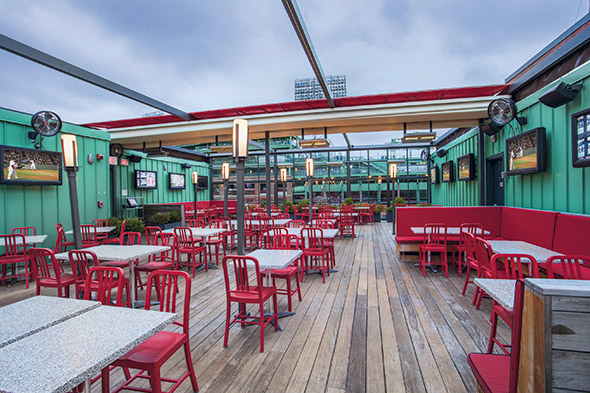 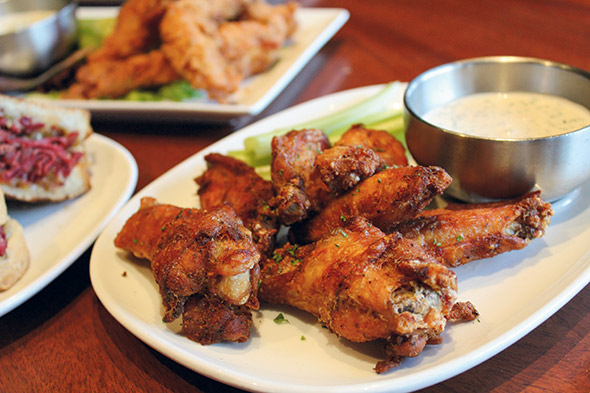 “It’s a great spot to go on a Sunday, with four to five games being shown at a time that are visible from every seat,” says Sean McDonald, executive chef.

Although definitely a sports bar, Tony C’s is atypical of the segment. It offers California wines, craft cocktails and an extensive draft beer menu. And its customers are more apt to eat lighter and healthier fare, such as its salads, sandwiches or fresh fish tacos. Tony C’s demographic skews from families to businessmen and women to hockey teams on weekends.

A testament to its menu is the restaurant’s expansion plans at the local mall, where a second food court location will soon serve as a companion to its full-service location there. “We can only fit so many people at one time, which is a great problem to have, but it can be tough to make reservations during premier sporting events,” says McDonald.

“Sports bars have already played with menu items, like adding a variety of wing sauces and variations of classic burgers, such as veggie, turkey, lamb, venison, chicken etc.,” says DeBoer. “Some mor e nontraditional menu trends include gourmet poppers and nacho varieties, carne asada fries as well as other popular dishes like bratwurst or gourmet sausages.”

“We consider ourselves a restaurant first and a bar second,” says McDonald.

Its dishes, including steak with garlic mashed potatoes, Louisiana gumbo, chicken scaloppini and cedar-planked salmon, are made fresh on site. The one freezer at the restaurant exists to store ice cream. Food is cooked to order, delivery services are available and allergy requests are accommodated.

Although the menu includes pasta, steak and fresh fish, Tony C’s is known best for its burgers.

“These half-pound burgers are formed in house and served on a toasted brioche bun,” says McDonald. “Gourmet versions with fried egg and crispy pork belly, veggie and turkey burgers are popular.”

For today’s sports bars, it has become necessary to add equipment in order to diversify menus, so this has made it worth the investment.

“Building out a kitchen involves some of the most expensive purchases, so operators are looking at every bit of product as well as warranties and durability,” says Lovi. “For example, I look at refrigeration through preventative maintenance. If you can get 10 years out of a sandwich or pizza table, that’s great. But if it’s lasting only two to three years, it becomes expensive.”

When Lovi opened his first sports bar 20 years ago, the only requirements were a few televisions and 10 beers on draft.

“Now you need a lot more with design, decor and offerings,” he says. “As an example, in the front of house, I’m seeing the ability for guests to control volume and television selection from where they’re sitting with a Bluetooth connection.”

“If you’re looking at two places and one has a 65-inch LED television and another has older tube televisions behind the bar, people would think their house TVs are better,” says Lovi. “Bathrooms also are important, and should include nice tile work and no broken components. The average consumer has no idea about the price of restaurant fixtures, but if these are worn, they will notice. You don’t need to invest in $500 bar stools, but comfortable seating will encourage customers to stay and should be worked into the budget.”

Because the true appeal of a sports bar is the ability to watch games in an immersive environment, multiple television monitors with a variety of sporting events is now commonplace.

“Today’s bar owners are investing in networked-AV, which allows video to be deployed on a flexible Ethernet network, thereby giving bar owners the flexibility to pull content from multiple sources and deploy this across monitors throughout the space,” says Rebel’s DeBoer.

In terms of design, sports bars have moved from a masculine approach featuring a bunch of televisions and a limited menu to more bright, cheerful and sophisticated interiors with higher-end menus. This includes seasonal beer and cocktail options to accompany dishes prepared with local ingredients.

“Following suit, in these more upscale and polished-yet-casual environments, essentials like plates, glasses and flatware are typically upgraded, as well,” says DeBoer.

Sports bars have evolved, and for those offering larger menus with creative offerings, the latest electronics for sports viewing and comfortable, updated decor, it’s a win-win.