With an open kitchen and more sophisticated look, this fast-casual concept’s design matches its food. 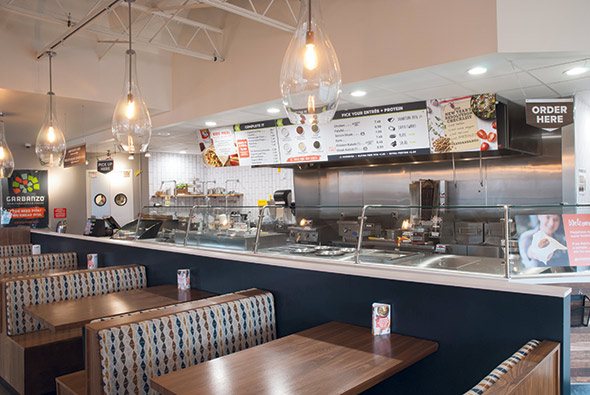 If CEO James Park had his way, Garbanzo Mediterranean Fresh would probably have a different name.

“I always say that if I were a betting man, [I’d bet] this was the food that was served to ancient Roman and Middle Eastern soldiers. It’s ancient food, Biblical food, if you will, that a lot of people are just now discovering,” Park says. What’s more, he adds, it’s generally healthy food that accommodates several different diets, including low-carb, paleo, vegetarian and vegan.

The chain fully embraces the seriousness, and the simplicity, of this food. Each restaurant, for example, makes all its sauces from scratch and bakes its pitas fresh in-house using only five ingredients: flour, water, salt, yeast and sugar. Garbanzo’s uses antibiotic-free beef and chicken, marinating the proteins in the restaurant for 24 hours. Finally, staff hand-cut all meats and vegetables in-house.

The healthful nature of Garbanzo’s food combined with the care the chain puts into making it, says Park, inspire its two mantras: Love in Every Pita, and Feel Brighter on the Inside.

There’s a catch, though. Historically, none of this has been communicated by the brand. There’s the lightheartedness of the Garbanzo name of course, but also the restaurant’s design, which, Park says, has traditionally been “tongue-in-cheek” and “plastic-ey.” Nothing about the look and feel communicated the quality of the food or the effort that went into producing it.

With that in mind, the chain introduced a new prototype last fall in Clayton, Mo. The design allows guests to enjoy their meal in a more sophisticated environment and better showcases the quality of Garbanzo’s food and all that goes into making it.

Inspired by the Food

According to Park, the old Garbanzo prototype had an orange and dark green color scheme that typically wasn’t found in the foodservice world. It also was much more “staccato” with little mixing of colors and sections of the dining area that felt cut off from the rest of the operation.

The new design takes its inspiration from the food the restaurant serves. “A lot of the things you’re going to see, although they may not be an exact match, are very good representations of the elements you’re going to see in the Middle East,” says Park. These design elements include custom-made shelving, more textured materials, wood tones and multiple shades of blue reminiscent of the Mediterranean. 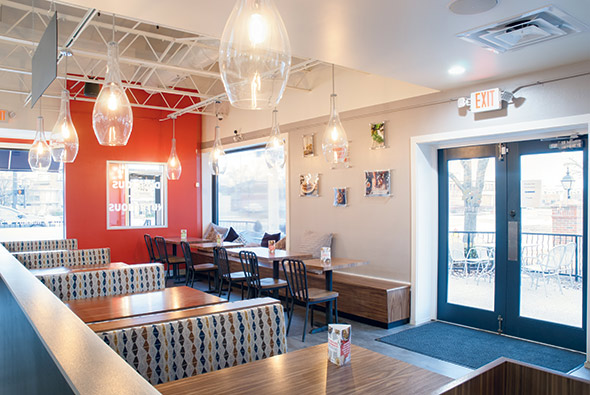 Compared to its previous look, Garbanzo went with a more sophisticated design in its new interior to reflect the quality and care that it puts into its food, says CEO James Park.

A wood-style tile serves as the floor. And wood panels cover the ordering counter. The restaurant’s wall decor tends toward the minimalistic, grouping together just a few pieces of food photography with brand messages like Simple Tastes Better.

Compared to the previous design, this new prototype is much more open, as well. According to Park, this gives practically every seat in the restaurant a good view of one of the prototype’s most important innovations: a new, fully open kitchen.

Open kitchens, of course, are nothing new, and front-of-the-house cooking is particularly common in the fast-casual segment.

Garbanzo’s kitchen, however, takes it a step further. Not only is cooking performed up front, all prep work and baking of the chain’s signature pitas happens under the watchful eye of the customer. 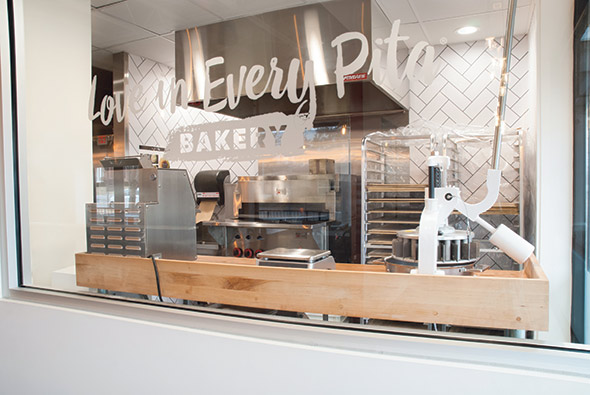 To show off the freshness of its food, Garbanzo put its pita-making station on display behind a glass shield.

According to Park, this setup aligns with the chain’s commitment to serious food. Garbanzo has long hand-cut its vegetables and baked pita from scratch in-house, but these activities were mostly hidden in the previous design. Moving them up front will communicate the quality of the chain’s food to customers.

What’s more, the new kitchen design and layout gives customers a chance to look at the food and understand their options, many of which may be unfamiliar to first-time guests. “It’s funny that some of the oldest food on the planet people are now discovering and we’re having to teach them from the beginning,” says Park.

This teaching starts with the orientation of the kitchen itself.

Providing such a sneak peek can be especially valuable when you’re serving food that many guests aren’t familiar with. “It’s subtle, but a very important change in perspective, especially if you’re teaching somebody something brand new. They need to see what others are ordering and it gives them ample time to decompress and really digest — no pun intended — what’s happening in front of them,” says Park.

Garbanzo made other changes to better showcase its food, too. In the ordering line, the food shields are tilted slightly toward the food. While still fully protecting the ingredients, this allows guests to lean in a bit to get a closer look at the offerings.

And, as mentioned, the chain has moved all its prep work to the front of the house, creating a completely exposed kitchen.

Out in the Open

The chain’s new kitchen starts with the pita station, which has nearby benches that allow guests to watch staff make the bread. 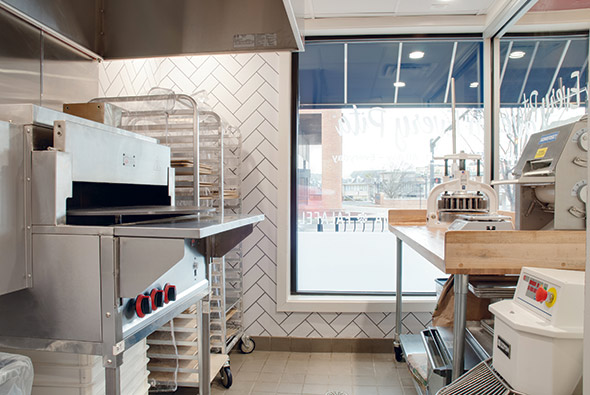 A new high-speed oven can cook a pita from raw dough in just one minute.

The station sits behind a glass wall; equipment includes a sheeter, a dough press and a floor mixer, along with various smallwares. The on-demand-baking design means staff only bake bread when guest walk in the door.

A pita oven serves as the workhorse to enable on-demand strategy. The oven can cook a pita in just 60 seconds. This unit, which Park says has only been on the market for a few months, has four hot spots along with a rotating cooking surface, which sits half-in and half-out of the cooking chamber. The surface itself has a separate heating element that helps cook the pitas. “You can easily lay down the dough and in one revolution cook the dough.”

After passing the pita station, guests work with a team member to assemble their order. Garbanzo follows a co-creation model: Diners select one of four main menu options, including salad, wrap, pita and plate, then walk down the line picking out exactly what they want in their meal. 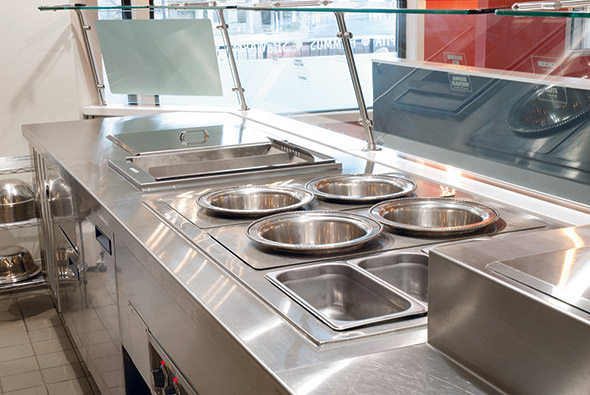 Round bowls display proteins, which make the food more appealing and easier for team members to scoop.

A cold table marks the first stop in the ordering process. It holds multiple types of hummus in one-third-sized sheet pans, with extra hummus stored below. Next comes the falafel dump station. This section holds falafels fried on the restaurant’s nearby hot line. The station itself utilizes a dump common to fried chicken restaurants. This piece, says Park, blows hot air horizontally across the falafels, keeping them warm and crisp.

After the falafel dump comes another cold table, which displays vegetables including tabbouleh, red cabbage and cucumber, with backups held in refrigerators below.

Following the veggies, the protein table holds grilled chicken and grilled steak. Instead of using standard sheet pans in a hot table, Park displays these items in custom-made round pans measuring 9 inches across. These pieces better showcase the food and allow staffers to scoop out proteins more quickly and easily.

By concentrating the food in a few spots on the table, the offerings remain warm. “You have some dead spots sometimes when you use wider sheet pans. These round pans are in a concentrated area. The hottest point is going to be right there in the middle [of the pan],” says Park.

Notably, the chain is testing whether to warm these proteins using a steam or induction technology. Both work well so far, so Park anticipates using a mix, depending on the specifics of each location.

A topping and sauce station follows the protein station. The chain’s sauces, in particular, play a big role in Garbanzo’s flavor profile, so the restaurant showcases them through the station’s design: The chain elevates the wells holding the sauces by about five inches and tilts them forward slightly, communicating to guests that these are worth trying. 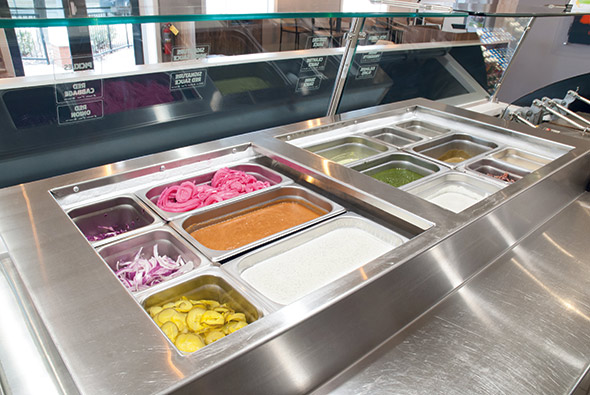 Garbanzo’s uses the tried-and-true co-creation model for food production, allowing guests to pick exactly what they want in their meal.

While the sauce station marks the end of the customer-facing production line, the hot line sits along the restaurant’s back wall, below an 18-foot hood.

The falafel station starts the hot line. This area begins with an upright reach-in refrigerator, which stores the falafel batter. This piece, along with a falafel baller, sits just past the hood. A two-basket fryer sits underneath the hood and actually cooks the falafels. Staff also use these fryers to cook house-made french fries and potato chips.

After the falafel station comes the gyro/shawarma cone, then a three foot-flattop grill used to cook chicken and vegetables. Next comes a gas charbroiler, which staff use to cook kebabs and steaks. Refrigeration units below these two pieces hold food items before cooking, Park says.

While the charbroiler marks the end of Garbanzo’s cooking line, the back wall also hosts the chain’s relocated prep station. This station consists of a custom-made stainless steel table with a hand sink built into it. Not only does this sink encourage cleanliness among staff, it makes it easier for them to keep the prep area neat, says Park. If there’s a spill, staffers can quickly and easily wipe it right into the sink.

The work table also has another custom feature, a pull-out wooden table that serves as an additional work surface when needed. “We prep in the morning, and in the afternoon we pull the cutting board out to chop our meats that we grill fresh throughout the day.”

The first of these new Garbanzo stores opened just a few months ago. With some experience operating the restaurant under its belt, the chain is now looking to develop more restaurants with this design.

As the chain expands it will concentrate on markets in the middle of the country. These locations, says Park, are easier to support from the chain’s Denver headquarters. “Just growing opportunistically is one thing, but to truly have partners and support them effectively, you need to have them close by.”

While the chain is happy to go into large cities, Garbanzo will focus its energies on places that are “statistically underserved, that brands aren’t targeting as primary markets,” such as St. Louis, and Columbus, Ohio.

Notably, the chain is also open to building restaurants in spaces of various sizes and in nontraditional locations. In fact, Park says Garbanzo is willing to adjust its menu (and therefore its kitchen package) to fit promising real estate and has even opened a unit on a college campus in a space less than 600 square feet.

Just as important as the market and real estate, though, is the company’s franchise partner. As a mission-driven business Garbanzo wants to work with those who share its commitment to spreading healthy food and healthy eating.

Garbanzo Mediterranean Fresh at a Glance