Regulatory drivers, top chefs, consumers and even the Pope, help push topic of food waste to the forefront. 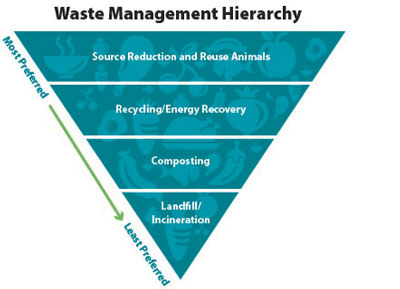 waste hierarchyMore than 40 percent of our food becomes waste, according to the National Resources Defense Council, and yet, 41 million Americans continue to go to bed hungry. To say that waste management represents a "hugely dynamic landscape" is an understatement.

Look no further than Anthony Bourdain's Wasted! documentary or the United Nations' goal  to cut the world's food waste in half by 2030. Even the Pope has been talking about food waste, comparing it to stealing money from the poor.

"Food waste has become a big deal, well beyond an industry issue," says Andrew Shakman, president of LeanPath, a waste management consultancy based in Beaverton, Ore., and longtime leader in the fight against excess food waste. "This is now a social, ethical [and] environmental issue that has taken hold."

A few key things keep driving this issue forward. First, cutting down on waste seems to fall into the same conversations as farm-to-table cuisine and local sourcing, Shakman says. The topic of waste management continues to gain attention from the same people working on reducing energy and water consumption. It doesn't hurt that some top chefs with a lot of name recognition, like Dan Barber, have been publishing books on the subject and reinventing the wheel with what he dubs as "improper produce" (meaning less-than-picture-perfect produce), scraps and leftovers. Paying attention to food waste never used to be this cool.

Regulatory drivers also push more players along the path of waste management. In 2015, the U.S Department of Agriculture and the U.S. Environmental Protection Agency  announced federal targets to cut food waste in the country by 50 percent by 2030.

Some municipalities now prohibit foodservice operators from using certain biodegradable packaging that claim to be compostable. Another regulation in the making: A bill proposed in California seeks to standardize expiration labels to lessen the confusion surrounding "sell by," "best by" and "use by" language.

And California's Almeda County in particular has been a leader in the charge on waste management efforts, from educating the public and businesses about ways to cut down on food waste to enforcing laws banning restaurants from offering single-use plastic bags. Other regulations in the Northeast now require operators to pull food waste out of landfills.

"We can make progress with waste management but the question is, who will hold us accountable for it?" Shakman says.

A report from the National Resources Defense Council (NRDC) found that restaurants account for 44 percent of all discarded food in three cities. In Nashville, Tenn., for example, 34 percent of the total food waste came from restaurants, while in New York, scraps from these kitchens made up 20 percent of the city's food waste. The report also estimated that fewer than 5 percent of all restaurants currently donate leftover food, but on an ambitious food recovery plan, restaurants could hypothetically provide an additional 10,300 tons of food to people, rather than sending it straight to the landfill or even compost center.

The good news is that the foodservice industry continues to invest in solutions to this omnipresent challenge. Investors see dollar signs around issues of sustainability, and food waste seems to be one of them, with some investors even putting contingencies regarding sustainability initiatives, like waste management, in annual requirements, Shakman points out. "It's pretty exciting that waste management has become hugely strategic for operators and a chance to score points," he says.

The focus of waste management has also begun to change. What once was all just about composting, recycling and better packaging, now revolves around preventing the waste in the first place.

After all, the very top — most preferred avenue — of the EPA's Waste Management Hierarchy  is "Source Reduction and Recovery." Everything else follows in secondary importance, and that includes, in this order: recycling/composting, energy recovery, and treatment and disposal.

"Even though chefs and restaurants talk a big game about source reduction, not everyone does it," Shakman says. It takes time, effort, and of course, money, to measure waste and not everyone is willing to pool those resources to do it.

What many chefs do instead is use and reuse scraps and other leftovers in different ways. With the advent of whole-animal butchery, some are using scraps and off-cuts for sausage making and charcuterie boards, and then charging a premium for those items.

More operators now source, or try to source, waste measuring and tracking devices to identify problematic behaviors and avoid overproduction. Some noncommercial operators, however, can access funding from local organizations and/or smaller municipalities to implement tracking and measuring scales and software programs, justifiable as part of a larger, sustainable mission. The World Resources Institute has even put out a global protocol on how to properly measure and track food waste.

Outside of source reduction, scrap reuse and composting, waste management advocates now turn to another approach to turn trash into treasure: food recovery and donations. This poses a challenge for post-consumer food in made-to-order restaurants. However, larger institutions like schools, universities and healthcare, which all generally have extra prepared meals on hand, have a stronger potential to help feed hungry individuals safely, according to the NRDC.

National programs like Feeding America continue to gain steam thanks to funding that helps them develop better infrastructure to be able to collect large amounts of expired or donated prepared meals and then distribute it to pantries on a more local level.

Behavioral changes play an important part in the success of any waste management initiative. "There is increasing opportunity for employee engagement because more employees care about this and other topics of sustainability," says Shakman.

Like with most things in business, however, it all goes back to the money. Perhaps the biggest driver of better waste management in this country comes from the financial opportunities that help operators cut down on food waste. As labor and food costs skyrocket, they are saving dollars by cutting down on how much food they make, and then by shrinking the amount of trash sent to costly landfill waste haulers. Reducing energy and water consumption, naturally, plays a role in these efforts as well.

ReFED represents more than 30 businesses, nonprofit organizations, government leaders and foundations with a commitment to reducing food waste in the United States. The group includes the National Restaurant Association, Food Marketing Institute and the National Association for Convenience & Fuel Retailing, among many others.

The heavily funded project, launched in early 2015, has released an extensive, online guide with 27 steps retailers, restaurants and other businesses can take to cut down on food waste, with a goal of reducing waste nationwide by 20 percent over the next decade and by 50 percent by 2030, as set by the federal government.

Those steps include feeding food waste to animals after it is heat treated and dehydrated; building infrastructure for more centralized composting; expanding temperature-controlled food distribution infrastructure for donations, and encouraging supermarkets and other retailers to accept and integrate the sale of “off-grade produce” or “imperfect produce,” among others.

The guide encourages restaurants and foodservice operations specifically to use smaller-sized plates and eliminate trays to cut down on food waste in all-you-care-to-eat settings like schools and universities, and partnering with designers and equipment manufacturers and suppliers to build in more infrastructure for on-site food processing to turn unused food into soups, sauces, jams, and other items that can be re-served or sold.