With real estate growing tighter, more restaurants and foodservice operators are carving out space on their rooftops to grow vegetables, fruits, herbs — and even manage beehives. 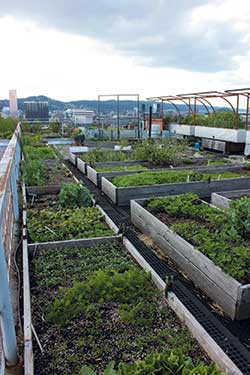 Noble Rot’s rooftop garden produces an array of greens, including mustard greens, arugula, ruby streak, mizuna and other lettuces as well as rhubarb, strawberries, turnips, peas, beans, cactus (nopales), fennel, French radishes, carrots, peppers, tomatoes, cucumbers and more.Green roofs are part of a hyperlocal movement taking the nation by storm as chefs and operators look to go beyond working with local farmers to grow and source right from their own immediate surroundings. In fact, hyperlocal food was ranked No. 1 on the National Restaurant Association's What's Hot culinary forecast for 2017, up from the No. 3 slot in 2014.

Noble Rot in Portland, Ore., has led the charge for some time now, with its 3,000-square-foot rooftop garden. Essentially a complete ecosystem, the garden — hydrated naturally by an aquifer beneath the building — supplies food for the restaurant, and serves as a learning center for the city about urban agriculture.

The LEED Platinum building was built with the space for the garden in 2005, and ever since then Noble Rot Chef/Co-Owner Leather Storrs has expanded the garden each year, with the most changes happening between 2012 and 2015. "I worked with our architect to build some steel raised beds to replace the 50 plastic kiddie pools we started with," says Storrs, who made the switch out of concern that plastic could leech into the soil and into the food.

The two-foot by six-foot beds with built-in pond runners allow irrigation water to drain directly off the roof. Currently, the garden supplies about 40 percent of the restaurant's produce during peak summer seasons, dropping to 20 percent during other times of the year.

An avid gardener, Storrs tends to the garden himself, but also gets help from passionate staffers and a full-time gardener and assistant. During harvest season, the group comes together to pluck vegetables, fruits and herbs each day.

Storrs works with the gardener to choose which types of produce to plant, but the gardener will also make decisions as well. For instance, fava beans — while they taste delicious — also help develop nitrogen in the soil, and the leaves and flowers of the plant can be used for garnish and flavor enhancers since it takes a lot of fava beans to get to a usable amount.

"People think of these things as a byproduct, but to be able to include the whole plant helps cut down on waste and it's really unique to having your own garden," Storrs says.

Noble Rot's gardening team also produces 25 different kinds of herbs and an array of greens. Storrs also tries to incorporate interesting and heirloom varieties of produce, like tramboncini, an Italian squash, to help differentiate his product "in a very competitive market."

Green roofs require careful irrigation planning because of the direct heat and sun they receive. Instead of having to water for hours on end, many operators will use special planter boxes and/or drip irrigation systems meant to keep the soil moist and drain off the proper amount of water.

It's possible to run hoses up to the roof, but Noble Rot is lucky; during the initial construction of the LEED building, architects came upon a natural aquifer beneath the ground. The water is used to irrigate the garden, as well as supply gray water to the plumbing system.

However, Storrs and his team had to add additional minerals to the water to tone down the acidic levels, which originally harmed the plants. By adding coffee grounds and other natural soil amendments, the team has been able to improve the pH balance of the water.

One very important consideration when designing and implementing a green roof is the weight of the beds, soil and people on the rooftop. In some cases, the building will need to be modified with secondary decking or supports that can help handle the excess load, while leaving room for future growth.

"We had an engineer come and determine how much weight our roof could handle before building our garden, and when considering expansion," Storrs says. "We are spec'd out for nine inches of soaking wet dirt across the entire roof, so we're fortunate our roof can handle that much weight."

Rooftop access poses another huge concern. There needs to be a safe and direct staircase or elevator to be able to get up onto the roof.

Electricity factors in as an important feature to have on the rooftop as well, Storrs says. "We are able to string lighting and smoke meats and use the electricity for other needs," he says. In windy areas, wind barriers and vertical structures might need to be installed.

Rooftop gardeners generally use plain old scissors to harvest produce as items ripen. Beyond that, typical gardening supplies like gloves, shovels, pruning sheers and the like come in handy.

Cisterns and other vessels can be used to collect rainwater for irrigation, if the water is not too acidic.

Downstairs, the produce from the garden will need to be washed and dried just like any other produce, and then stored in clean, organized bins before prep and service.

If starting with seeds, there will need to be space and containers to hold those starters in the late winter and early spring, before the beginning of the growing season.

Some restaurants and other operators have taken to soil-less aeroponic systems to grow vegetables on-site, and on rooftops. These systems use towers to grow herbs and vegetables vertically, with air and water or mist running through the system where the roots of the plants collect.

John Mooney, co-owner and chef of Bell Book & Candle in New York City uses this system to clip herbs, lettuces and other delicate produce to order so they're super fresh.

At Floriole in Chicago, chef/owner Sandra Holl started her own beekeeping on the roof of her French cafe and bakery.

A beehive manager comes by regularly to tend to the hives, which are covered in plastic during the winter to shield the hibernating bees from the elements. The beekeeper collects and processes the honeycombs for honey at a different location.

Beekeeping in rooftop gardens helps ensure the natural pollination that plants need to grow, and it allows the restaurant or other operator to offer guests a uniquely hyperlocal product. Jars and sterilizing equipment might be required in order to safely serve the honey.

Rooftop Gardens Across the Country