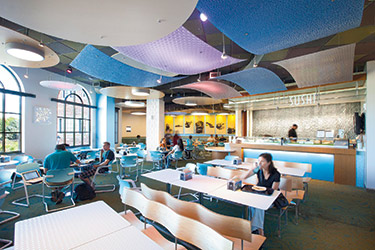 The University of Colorado Boulder’s energy-saving lighting programs include automatic lighting with occupancy sensors in dining spaces and the back of the house.The University of Colorado Boulder (CU Boulder) paves the way for sustainable initiatives in the college/university sector. For the past 15 years, when very few colleges were delving into "green" activities, CU Boulder replaced existing foodservice equipment with more efficient and Energy Star-certified models, says Juergen Friese, CFSP, association director of Campus Dining Services at CU Boulder. That includes everything from refrigeration to hoods and some cooking equipment.

Since CU does not separately meter foodservice areas to measure consumption of utilities such as gas and electricity, Friese does not have dining service-specific stats regarding energy and cost savings the equipment change-out has generated. He does know that by simply switching dishwashers, water consumption dropped from a whopping 300 gallons per day to just 96 gallons per day. And replacing 20-year-old walk-in coolers that used water-cooled condensers with air-cooled, remote condensing walk-in coolers has also saved literally a million gallons of water per year.

"The new walk-in coolers were an easy investment decision for us given we were losing a couple gallons of water down the drain every minute," says Friese.

To gain approval for sustainable initiatives, Friese calculates potential savings, including an estimated ROI, that implementing energy- or water-saving equipment could generate. Since the university has a strong culture of sustainability, new, efficient equipment purchases generally gains the approval of the CU administration.

Lighting also plays an important part in the university's energy saving goals. That includes automatic lighting with occupancy sensors in dining spaces and at the back of the house. Older bulbs were retrofitted with LED lights, even in walk-in coolers and freezers that tend to stay on most of the time.

To cut down on waste, the university uses a tracking system to measure and even take photos of the food being composted. This allows dining services managers see what type of foods generate the most waste and adjust production schedules and quantities accordingly.

In addition, for many years, CU Boulder used pulpers to process pre- and post-consumer food and convert the waste into compostable material that gets hauled away. Then the university took it one step further by implementing biodigesters that treat the food waste, returning it to the city's water treatment facility. The three-part system uses tanks to break down the food and convert it to liquid gray water.

"We started thinking about doing this a couple years ago, so I approached the city about it," says Friese. "The city has to use additives to treat the water, but by providing them water from our digester, they can actually reduce those additives because the water has a lot of nutrients in it from the food. This is our first try with this system and if it's successful we might look at other applications in other dining centers across the campus."

Yet another initiative incorporated solar panels at the new Village Center Dining and University Commons (see Facility Design Project of the Month), which opened in January. The solar panels are estimated to produce at least 140 kilowatts of extra, off-the-grid power.

The Village Center windows, made of special glass, automatically adjust tinting to the amount of sunlight during the day, allowing the university to keep its gorgeous views uncovered by traditional blinds or shades. These windows also help prevent extra heat gain in the building due to strong sunlight, which would otherwise add more pressure on the HVAC systems.

One of the more exciting aspects of the new facility, Friese says, is the 3,000-square-foot greenhouse. It will use a no-soil, water-based aeroponic system house to grow enough leafy greens, lettuces and eventually herbs to completely source the salad bar, which sits just 30 feet away. Students will be able to see inside the greenhouse next door through windows as they fill up their salad plates.

The dining services team relies on a farmer to supervise and lead production for the greenhouse, which Friese hopes will see its first harvest this fall. When that happens, staff will wash the greens in the space adjacent to the kitchen, where they will also prep and place the food at the salad bar or use it in other dishes.

"You can't get much more farm-to-table than that," says Friese.

The University of San Diego (USD) began ramping up sustainability efforts in 2013, starting with an e-waste recycling center and a "Be Blue, Go Green" campaign to get students geared up about the green initiatives planned.

Through an extensive, single-stream recycling program, the university now estimates it diverts about 60 percent of waste from landfills. A separate electronic recycling center takes toner cartridges, batteries and other electronic school supplies. USD also collects food waste for compost that its Be Blue Go Green Garden Club treats and uses to tend to the school's on-site garden.

USD Dining says it was the first campus in California to offer a sustain-a-bottle for its touchscreen soda fountain program last year. The reusable bottle has a unique RFID chip that allows students to purchase a semester's worth of beverages using the same container.

Composting takes place at Missions Café in the Valley housing area. The Valley also houses an organic community garden. Any student, faculty, or staff member interested in growing their own food has access to this piece of land. Missions Café also uses produce from the garden. Compost from food waste then fertilizes the garden plots, thereby closing the loop.

The main dining building on campus features the Clean Earth Kitchen, which offers plant-based meal options that are 100 percent animal-product free. The building also houses a bio-food digester that transforms 3,200 pounds of food waste into water each week.

Last year, USD introduced a climate action plan with the goal of reducing the university's emissions and environmental footprint 50 percent by 2035. The university plans to reach that goal by swapping out older equipment for more efficient models, among other changes.

The Office of Sustainability, which includes USD Dining Services personnel, connects with students about sustainability issues through the USD Green Team's Facebook page.