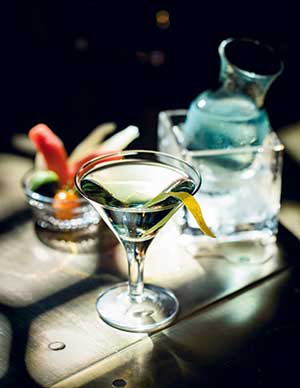 Photo courtesy of Soigné GroupCraft cocktails are here to stay. Proven to have found a permanent spot on higher end bars and restaurants nationwide, bartenders continue to explore new spirits, mixers, pairings and recipes that advance the craft cocktail movement. Not to mention, booze is where the business is at.

"For many restaurants, the bar is more important to the bottom line than the food," says Josh Goldman, a master mixologist and founder of Soigné Group, a restaurant, cocktail and bar consultancy. "As far as margins go you're never going to find the margins you can on food as on beverage. Chefs are doing great things with food but diners also expect bartenders to keep wowing them and shocking them with new drinks, as long as it feels authentic to the space."

Research and trends firm Andrew Freeman & Co. pointed out the growing importance and need for bar and cocktail consultants in its 2017 trends report. "First we just had a guy or gal who made us a drink and tended the bar," the report states. "Then we had mixologists and our drinks took three hours. We even had a brief stint with bar chefs. Now we're back to bartenders, and this year saw the rise of the culinary consultant. These cocktail geniuses are taking bar programs and training of bar staff to a whole new level. Food is no longer the main or only attraction; the cocktail menu is a big draw and has a point of view as strong as what's coming out of the kitchen. Rock star consultants are pushing the envelope and creating cocktail programs that stand out among the crowd."

Bartenders today seem to be moving away from the overly complex and elaborate drinks of a few years ago, reducing the number of ingredients and focusing on even higher quality selections.

"We're going back to simple and refined, classic drinks," says Kasey McDonald, a former mixologist and culinary R&D manager at CSSI, a food marketing and culinary innovation firm in Chicago. "I'm seeing more bartenders keep things clean and easy with five ingredients and that's it, versus drinks loaded with Blue Curacao and a million other add-ins."

Goldman agrees. "Over-the-top ingredients are going away and things are becoming more thoughtful and functional," he says. "We've become more focused on championing the friendly bartender again, and focusing on improving service, consistency and hospitality. If it takes 20 minutes to make a cocktail, that doesn't always work if you're doing 300 or 400 covers a night. A lot of young bartenders have great ideas and so much excitement, but they still need to learn how to edit themselves."

Cocktails making a comeback include negronis, the pisco sour, the Ramos gin fizz, old fashioneds — all now feature simple ingredients like fresh-squeezed lemon and lime juice, quality or homemade bitters and even egg white for a little froth.

The old fashioned cocktail, in particular, has had the most growth on menus nationwide, according to Datassential. In 2016, it was mentioned on 13 percent of menus, up 313 percent compared to the past 4 years. 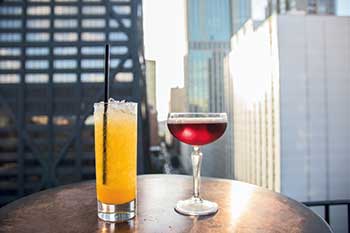 Chicago’s Drumbar developed a line of cocktails based on Netflix shows, such as the “Orange is the New Black” cocktail (left) and the Frank Underwood, based on the “House of Cards” character played by Kevin Spacey. Photo courtesy of DrumbarAs a result of some forward-thinking bars revisiting the tiki concept, rum cocktails continue to enjoy a renaissance. But today's tiki bars shun the oversized plastic mugs of Mai Tais poured from a pre-made mixer or sickly sweet slushies of the past. Instead, bars like Miami's Broken Shaker, Chicago's Lost Lake and others around the country carefully craft real daiquiris with high-end rum, fresh-squeezed lime juice and egg whites.

In Beverly Hills, Calif., Citizen turns to the food-friendly cocktails of the 1960s in a throwback to the tiki's history in Los Angeles and Trader Vic's glamour, Goldman points out. In addition to a lineup of rum-based tiki drinks and citrusy renditions, Citizen offers a riff on a Manhattan with apple-flavored brandy, Tennessee whiskey, Italian vermouth and a vintage port called the Jack Taylor. The restaurant offers another riff on a Harvey Wallbanger with vodka, a sweet Italian herb liquor, bitters and orange juice freshly squeezed to order with an extra kitschy name: I Hardly Knew Her. 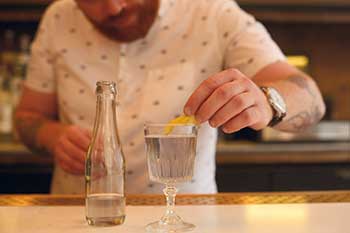 As part of today’s craft cocktail experience, bars like Bodega use fewer ingredients and have the bartender face customers so they can see the action. Photo courtesy of BodegaWhile barrel-aged cocktails might have been the thing last year, bartenders continue to move on to bottles as a more neutral-tasting, non-reactive vessel for batching, Goldman notes.

Barrels can add a certain complexity when done right, but they can also ruin ingredients when done wrong or over-aged because it starts to taste like the wood, Goldman says. "Bottle aging allows the cocktail to develop complexity within itself. A three-year, bottle-aged Manhattan will have more complex flavors that you wouldn't be able to get just from making cocktails a la minute."

Of course, bars can charge more for these premium drinks, and, in essence, they must do so in order to recoup the upfront expense. With bottle aging, operations don't earn any profits on the product until it's sold.

Bitters and aromatic liqueurs continue to emerge as the cocktail front-runner for many bars, which balance these with other secondary ingredients that feature more citrus or sweetness, according to Goldman.

McDonald also notes a growth in both artisan and homemade bitters. "We're seeing more use of old fashioned bitters, Pimms, Fernet-Branca, and the use of more digestifs and aperitifs," she says. Even the classic champagne cocktail coated in bitters with a sugar cube and lemon twist has made a comeback.

Craft cocktails may seem overplayed, but bar consultants and bartenders show us that couldn't be further from the truth. Thoughtful innovation, brand authenticity and service continue to shape craft cocktails.

In the world of molecular cocktailing, there's a new trend taking shape worldwide: ultrasonics. At The Whistling Shop in London, bartenders experiment using ultrasonic sound waves to turn liquid into vapor. This takes shape as an inhaled, versus ingested, gin and tonic. An ultrasonic bath, similar to a sous vide machine, can also help infuse flavor or quick-age bottled cocktails, according to Josh Goldman of Soigné Group. "You Cryovac the liquid, add it to the bath and it ages the flavor in much less time," he says. "This technology used to be used primarily with wine years ago."