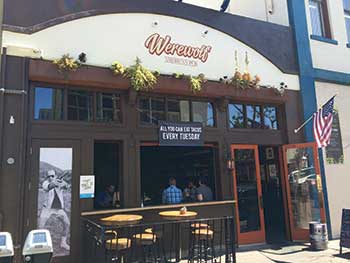 One key adjustment to Werewolf Bar & Grill’s cookline included installation of a new demand-controlled ventilation system, which translated to electrical savings of $1,800 per year.Locals and tourists alike flock to the popular Werewolf Bar & Grill in downtown San Diego's historic Gaslamp District. The 1,500-square foot, 50-seat restaurant and bar serves breakfast, lunch and dinner with weekly specials such as all-you-can-eat tacos on Tuesdays and brunch on weekends.

The fact that the kitchen operates long hours and the restaurant is open every day made the Werewolf an ideal candidate for the PG&E Food Service Technology Center's Cookline Project, which studies commercial kitchen systems and energy optimization. The FSTC teamed up with SoCalGas and San Diego Gas & Electric (SDG&E) on this study. FE&S first covered a portion of this study in October 2015 but given some developments in the area of demand kitchen ventilation, it seemed time for an update.

Several short-lived restaurants occupied the space prior to Werewolf taking over and the kitchen was remodeled several times, but the appliances remained the same. For the project, Werewolf owners and cook staff tested newer model, higher efficiency pieces of equipment — including a broiler, griddle, fryer and combi oven — at SDG&E's innovation center and test kitchen to fine-tune cooking processes before the equipment was installed at the restaurant as a replacement for its older, less energy efficient appliances. The project also included adjustments to the ventilation system, which ran at full speed, 24/7 and contributed to massive energy use in the restaurant.

As part of the project, meters were installed in the Werewolf's kitchen to monitor energy consumption and FSTC representatives analyzed the data to identify potential areas for savings. While some initial savings were detected, two years later, the FSTC released more detailed, final results from the ventilation portion of the Werewolf cookline replacement.

The team made some key adjustments to the cookline and installed a new, dual section, 18-foot, demand-controlled ventilation system with optical and temperature sensors over the main appliance line. This led to a 46 percent reduction in exhaust fan energy and a reduction of 24 kilowatt-hours to 13 kWh per day for supply fan energy.

This has equated to an electrical savings of 12,081 kWh per year, for a total of $1,800 ($1,200 for the exhaust fan and $600 for the supply fan), according to Denis Livchak, energy testing lab manager at the PG&E Food Service Technology Center. These findings have been verified by an independent party.

There were also additional heating and cooling savings as a result of the new demand control ventilation system. Based on the fact that the restaurant is located in San Diego, there was a gas heating savings of 1,200 therms per year, or roughly $1,000 a year.

"That number is actually low because San Diego has such a temperate climate, so the savings could be even higher in places like Miami or Chicago with extra cooling and heating needs," says Livchak.

The resulting savings in energy usage and costs demonstrates the huge impact DCKV can have on energy savings for all operations, including smaller, independent restaurants like Werewolf.

"Whenever people think about reducing ventilation energy use, they often just think of the savings on the exhaust fan electricity alone, but then there are all of these other, associated savings," Livchak says. "A good rule of thumb is you're saving half the energy of the exhaust fan savings on the supply fan and depending on the climate zone you're heating and cooling savings might be even greater." 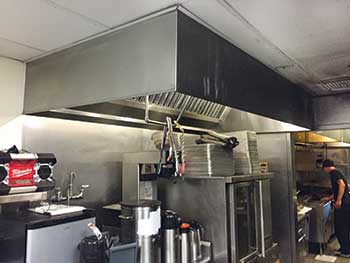 This is the old cookline at Werewolf Bar & Grill, which shows inefficient use of hood space.The Werewolf space had seen many different restaurant owners over time. Most recently a Japanese restaurant had occupied the space with three kitchen hoods. When Werewolf moved in, the team removed one of the hoods but left the other two on the line.

But there was a problem: the second hood had only a convection oven under it, as well as a refrigerated prep table. By simply moving the convection oven to the main cookline under the first hood, and moving the refrigerated prep table to another part of the kitchen, the restaurant was able to turn off the second hood entirely. This small, but significant change resulted in a savings of $850 a year.

"This shows that with such high restaurant turnover, it's easy for smaller, independent restaurants to just take over the space without redesigning the cookline, but in doing so this can result in a loss of efficiency and energy cost savings," says Livchak. Werewolf decided to keep the hood in place rather than remove it because of the expense in doing so, and to allow for any expansion of the hot cookline in the future.

"A demand kitchen ventilation (DCKV) system refers to any engineered, automated method of modulating (i.e., variable reduction) the amount of air exhausted for a specific cooking operation in response to a full-load, part-load or no-load cooking condition (i.e., such as by duct temperature, effluent opacity or appliance surface temperatures)," Denis Livchak and Rich Swierczyna of Fisher-Nickel, a division of Frontier Energy Inc., wrote in their published report, Draft Werewolf Demand Control Kitchen Ventilation Retrofit Field Study. "In conjunction with this, the amount of makeup air is also modulated to maintain the same relative air ratios, airflow patterns, and pressurizations. Complete capture and containment of all smoke and greasy vapor must be maintained when an exhaust system equipped with DCKV is operated at less than 100 percent of design airflow. Selection of all components, and design of the DCKV system, must be such that stable operation can be maintained at all modulated and full-flow conditions." 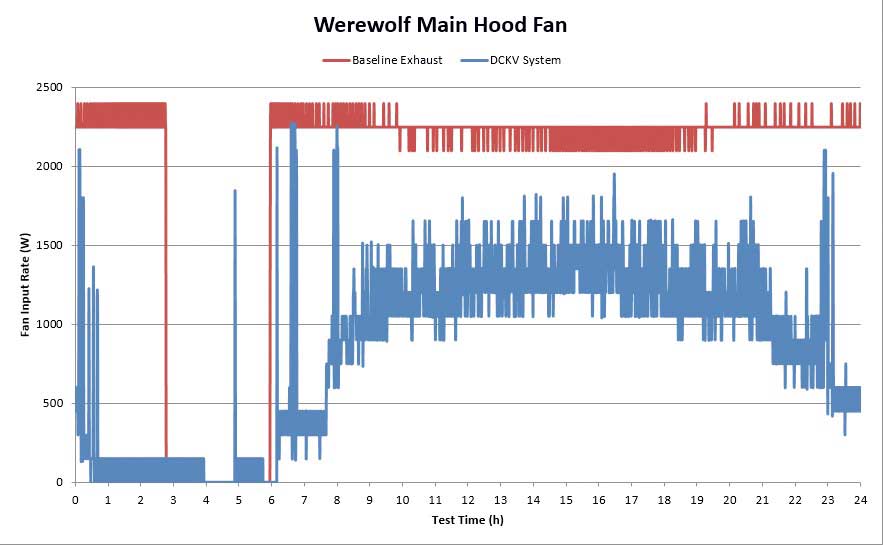 To prepare the cookline for the installation of a new DCKV system at Werewolf, the FSTC team first had to install variable frequency drives (VFD) because this was an older hood system. VFDs were installed on both the exhaust fan motor as well as the supply fan motor for the swamp cooler. Both VFDs were connected to the DCKV system in order to modulate both motors in unison without creating negative pressure areas.

"Many newer restaurants already come with these VFDs installed, so it's easier to install a DCKV system on top of that," Livchak says. "Werewolf's case was different because we were working with an older hood system so the project was more expensive than it can be for many newer restaurants."

Because of the age of the existing hood system, the FSTC team also had to swap the single-phase fan motors for newer, three-phase motors compatible with VFD, which again made the project more expensive than other, newer restaurant build-outs already featuring these more updated fan systems.

The FSTC then installed the DCKV system overnight in a two-day process to allow the restaurant to continue functioning during its normal hours, according to Livchak.

Operators can choose from two main types of DCKV systems, says Livchak. Lower cost models feature only a temperature sensor. More expensive, yet more efficient, models feature both temperature and optical sensors that go beyond just detecting heat and can detect when smoke is in the kitchen.

"Similar to a garage door sensor where if you walk under the door it will stop going down, the optical sensor will bring the fan speed up to maximum power if it detects any smoke," Livchak says. When they sense no smoke is present, these newer models will not only slow the fans down, they will slow the fans down even more than a temperature sensor-only system, thereby resulting in even more energy and cost savings, he notes.

According to the report, prior to DCKV system installation, the exhaust fan was operating at a constant speed and consuming 2300 Watts on average. The new three-phase motor consumes 2100 W at full fan speed and only 700 W at 30 percent speed. During low cooking idle conditions, the fan modulates down to 30 percent, so the fan operates between 700 W and 2100 W. Temperature modulation is seen between 400 W and 1500 W. The 2100 W spikes at 100 percent fan speed are triggered by the optical sensor.

The FSTC team took several steps to measure the results of the energy savings. The first was to determine a baseline commercial kitchen ventilation (CKV) system's hours of operation. The team also measured the average energy consumption of the baseline exhaust fan.

After upgrading the fans to accommodate VFDs and then installing the DCKV system, the team measured replacement DCKV system exhaust fan energy use as a comparison. The team also characterized the fan modulation based on energy results in order to determine energy savings of the DCKV retrofit and analyze its impact on the makeup air. The exhaust fan modulation was analyzed through energy measurement over a period of 40 days.

The electrical instrumentation package that was used for field-testing of the kitchen ventilation equipment included a true energy meter that measured both voltage and current. A data logger was used to log cumulative electric consumption from the electric meter's pulse outputs. Energy metering equipment was placed inside the breaker panel on the exhaust fan breaker. The exhaust fan motor was single phase for the baseline and three phase for replacement. In both cases the current and voltage were measured during all phases in order to take into account the power factor.

By replacing older appliances with energy efficient ones, Werewolf not only saved on electrical and gas costs per unit (official results have yet to be determined), but it also saw additional ventilation-related savings because these newer units generate less heat in the kitchen, which allows the fans to work at lower speeds.

As part of the cookline project, the FSTC replaced Werewolf's outdated, two-foot-wide broiler using about five therms per day for a newer, lidded broiler that in general can save operators anywhere between 10 percent and 50 percent savings depending on usage. The team also replaced an outdated griddle and fryer for newer, more efficient models.

In addition, the FSTC team helped Werewolf replace an older model convection oven using 3.5 therms per day for a multi-use combi oven using only 1.7 therms per day. In addition to saving $700 a year in savings as a result of this switch, the restaurant was also able to expand its menu by using the combi to cook a wider variety of foods, according to Livchak.

Though DCKV systems can require more involved planning in older restaurants, implementation is becoming easier and easier as manufacturers make adjustments to their models. This, combined with simple cookline adjustments and switching to newer, more energy efficient appliances can help save operators thousands of dollars a year in electrical and gas costs. For smaller, independent restaurants where every penny counts, that's huge. FE&S