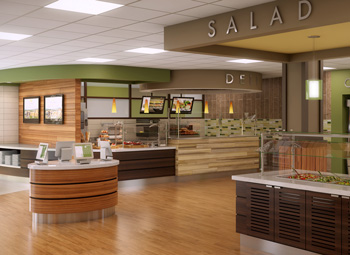 This rendering of Sentra's new food program shows how the more sophisticated design complements the new from-scratch food program. Customers customize orders via the kiosk ordering system, which has cut down on service line times.In a major overhaul of its foodservice program, Sentara, a 550-bed teaching hospital and trauma center in Virginia collaborated with its healthcare foodservice operator Morrison Healthcare to redesign the 14,000-square-foot cafeteria. The project also included an investment in higher-end foodservice equipment to deliver a 100-percent from-scratch, healthier, restaurant-style menu.

The remodeled cafeteria opened in August 2016, and since then, sales have grown 12 percent. The cafeteria now attracts additional customers from nearby medical facilities, and because the kitchen can prepare and deliver fresh, higher-quality and healthier meals, Morrison has turned the Sentara kitchens into a training site for its managers and prospective hospital clients.

In the redesign, doors were removed to create a wider, open space with a battery of stations preparing sandwiches on freshly baked bread in-house, pizzas, rotisserie chicken and meats, and even barbecue. Morrison also implemented a new, larger salad bar in the center of the space with a wider assortment of vegetables and composed salads, including some with whole grains like farro.

“Other than a couple of columns, there is nothing interrupting that full view of the space so customers can see all the cooking going on,” says Bruce Molloy, foodservice director at Sentara. Virtually all of the cooking now happens in the open cafeteria versus the back of the house, which is reserved for soup, sauce and other larger-scale production as well as food preparation for the patient line.

As part of the from-scratch kitchen redesign, Sentara invested in a variety of new pieces of equipment, including a vertical rotisserie oven for salmon, pork and chicken; a smoker for brisket, pork and sausage; an open-flame hearth oven for pizzas, Stromboli and other Italian foods; a proofing and baking convection oven for baking artisan breads on-site; and a combi oven for preparing healthier, baked chicken tenders, french fries and more. 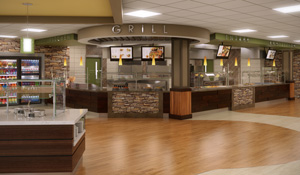 An open-flame hearth oven, added for pizzas, Stromboli and other Italian foods, was one of several new pieces of equipment added at Sentara.

“We can now proof and bake all of our fresh breads daily and roast all the meats that we serve ourselves,” says Tim Riordan, executive chef. “When we designed this kitchen, the thought process for the food was to make it more like an actual restaurant. We want to break the mold of stereotypical hospital food and make as much as we can ourselves.”

The smoker, also positioned out-front, uses hickory and applewood to slow-roast pork shoulder, ribs, brisket and chicken. “We also make our own dough and sauce for our New York-style pizzas,” Riordan says.

Since Sentara decided to go fryer-less to maintain its healthier menu focus, Riordan now uses a new combi oven to not only steam vegetables and cook proteins but also to “fry-bake” fries and chicken fingers using only just a spritz of oil.

The Sentara cafeteria redesign also included an expanded grab and go section with fresh sandwiches and salads made daily as well as sushi brought in each day.

In addition, a 30-foot-long, granite countertop was installed for beverages as well as for an expanded coffee program with a variety of hot and iced coffees and teas.

Installing a state-of-the art milkshake machine allows customers to customize their shakes and smoothies by choosing a base flavor, thickness and add-ins, from indulgent chocolate and candies to healthier fresh fruit and more.

The machine automatically blends the shakes and smoothies at the touch of a button so there’s no need to train extra staff on the equipment. It also has a self-cleaning program. Since using this new machine, Molloy says he’s seen dessert and afternoon beverage sales dramatically increase.

To complement the new, from-scratch program, Sentara went with a more sophisticated design that included handmade stonework, reclaimed wood for the columns, tons of glass, nickel finishes and a flowing, curved design with no square corners.

For the new cafeteria, Morrison and Sentara implemented a kiosk-based digital ordering system whereby customers can place their orders and watch them under their name in the queue as they’re being made.

The orders go directly to the action station where paper tickets are printed out for the cooks.

“The kiosks have cut down on the service line times significantly,” says Molloy. “We have been able to shave off 15 percent to 20 percent of time off the overall process, and along with that comes better order accuracy.”

This is especially the case as customers customize their sandwiches and other orders digitally rather than shouting orders at staff.

Eventually, Sentara/Morrison plans to upgrade to digital screens at every station for paperless food prep, and online ordering through the cafeteria’s website or smartphone app. Orders will be prepared separately and set aside for pick up.

Going to an all-scratch kitchen has helped Sentara save on food waste, as culinary staff now use scraps and other commonly thrown away ingredients in soups and sauces. “We work with a company called Improper Produce, which collects green bell peppers and onions and other produce that might not look perfect but tastes just as good in cooked dishes,” Riordan says. Not to mention he gets a discount on these items.

Soon, Sentara plans to offer whole rotisserie chickens, pizzas, barbecue, and family-style subs and meals for employees to take home at the end of the day. Employees will be able to pre-order take-home items via email before picking up their food on the way home.

Redesigning the cafeteria to a service-oriented, all-scratch model has already shown some return on the investment. When it comes to restaurant-style food at healthcare operations, “this is the way of the future,” Molloy says.