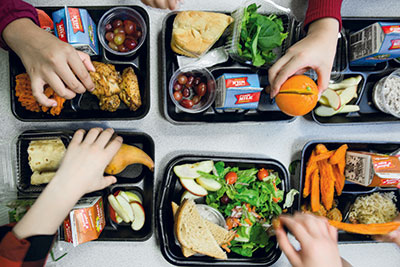 Photo by Marylinda RamosStudents eat with their eyes. This well-known reality in school foodservice influences cafeteria and serving line designs the world over. Penny Parham, MS, RD, administrative director, and Tom Holmberg, director of facilities, work within the department of food and nutrition at Florida's Miami-Dade County Public Schools. The two place visual impressions as one of their main focuses as they renovate and uplift dining facilities at several schools. Some of these operations are 50 and 60 years old and greatly need refurbishing.

"The reasons we are changing the serving lines and purchasing equipment is to improve the overall appearance of the cafeteria and to replace non-working lines," says Parham. "We're giving the serving lines a more restaurant feel to resemble what students are used to and want. If the lines are more enticing, we can increase participation."

The changes help eliminate the stigma of school meals being inferior to the food students purchase at their favorite restaurants. At the same time Parham, Holmberg and their team members focus on visuals, they must also keep the nutritional quality high. "Ensuring and maintaining food temperatures so hot food remains hot and cold food remains cold is essential to reflect the quality and wholesomeness of the schools' food," Holmberg says. "We also need the serving lines to be more energy efficient and contain more points of sales." 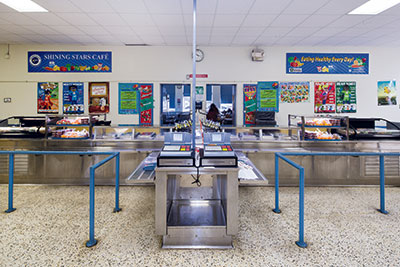 Two serving lines at Silver Bluff begin at the far left and right and merge in the middle. Colorful graphics add a cheerful message to students as they move through the serving lines. Photo by Marylinda RamosKitchen staff at each school prepare everything from rice and beans to burritos in the back of the house and bring it out to the lines so service can be quick and efficient. All salads, vegetables, casseroles and sandwiches are also prepared from scratch.

"We added covered fluorescent lights underneath the counters, which enhances the appearance of the food," Parham says.

New display and beverage cases replace old units. "In elementary schools, for instance, we stopped ordering milk boxes because they have only one use and the industrial appearance contributes to an institutional ambiance," Holmberg says. "The new cases are more efficient and less limiting and allows us to display beverages and salads, fruit and other menu items together." He is particularly pleased with a small display unit for elementary schools that allows team members to take off the lid and keep it open during service without affecting the cases' internal temperature.

Adding steam table units and display cases on one line results in a significantly successful improvement in food presentation. As a result, more students participate in breakfast and lunch. "We added 25 to as much as 200 meals a day at some sites by making this change," Holmberg says. 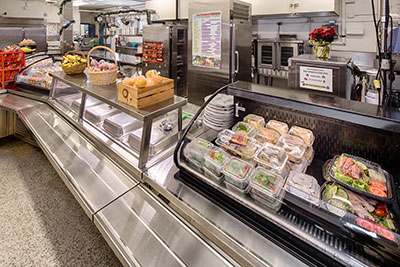 Palmetto’s serving line shows off the hot foods with steam table pans and cold foods with a refrigerated display case.The number of lines in each school depends on a school's participation and population. For instance, at Silver Bluff K-8 school, two service lines were taken out and replaced. "This was a very old line and drainage was poor," says Holmberg. "Electrical panels were stuck and the serving line was in poor shape." Holmberg's design team transformed the serving line, which sat on a cement foundation above the floor, by adding new drainable hot wells, new electrical panels and lighting so the food looks more attractive.

"The stainless steel in these serving lines is preferable because it does not age the serving line, always looks good and is easier to keep clean and free of spots," Holmberg says. "It is also solid because it is drilled into the floor and is much safer for the kids. When they wiggled the old lines they came apart. This equipment had to stand up to wear and tear. Students went crazy when they saw it — they loved it."

The new lines contribute to speeding up the time kids must stand in line to pick up their food. "Getting 2,000 kids through a line in one hour or less is very difficult," Parham says. "So we must have enough lines so more kids can get through the lines and have a few minutes to enjoy their lunches and relax."

Improved graphics enhance the dining rooms and contribute to enthusiastic customer response. "We recently received a grant from the National Dairy Council and used it to add new signage and beautiful graphics at 32 sites," Holmberg says.

Food Truck and the Future 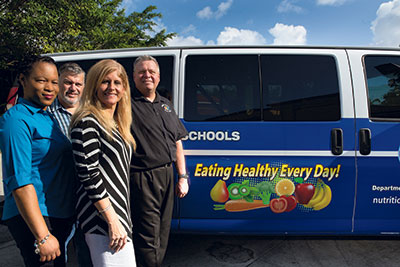 The food and nutrition team inspects the food truck. From left: Georgia Lue, area supervisor; Armando Rodriguez, transportation supervisor; Mayra Marreira, principal; and Tom Holmberg, director of facilities. Photo by Marylinda RamosA food truck also contributes to the school nutrition program's success in Miami-Dade because it enhances services offered. Based at the main foodservice building, team members prepare food in the test kitchen. The truck travels to schools based on their requests for special events, such as recognizing honor roll students, graduations and awarding good participation.

Conception began about four years ago and the truck debuted two and a half years ago. Miami-Dade's department of food and nutrition spent $185,000 to build the truck. "It took about one and a half years to complete from conception to specifications, ownership and operation," Holmberg says. The air-conditioned truck contains a flattop grill, a griddle, refrigerator, beverage case, hood, refrigerated cold rail for making sandwiches and salads, a compressor and piped-in music. The truck can serve up to 500 meals.

"We had some different equipment installed to accommodate our menu and we received input from staff at schools on the design and what they needed in order to serve students efficiently," Holmberg says. "The staff who work on the truck were a big part of our design because they had ideas that made it more efficient and safe to operate."

Depending on the school site where the truck visits, usually three to four employees work on the meal service. The operating times vary according to school lunch periods. Popular menu items include turkey burgers with turkey bacon on a whole wheat bun, baked fries, baked onion rings and quesadillas. Students can also choose from a variety of fruit and vegetables, just as they do on the schools' serving lines.

Throughout Miami-Dade County, adding a truck, remodeling and replacing equipment contributes to student participation in foodservice offerings and also to employees' positive attitudes. "They like the new equipment, can take care of it and know it will help increase participation and improve their programs," Holmberg says. "With all the merchandising, the cafeterias look so much better and don't look as institutional. We're going to continue to improve the cafeterias as long as we can afford to."