The Operational Impact of Local Sourcing

Mention the phrase “farm to table” and it conjures up images of white-tablecloth chefs bringing in unusual, high-end agricultural products from artisanal growers. But today, operators in virtually all segments of the industry, including noncommercial, use the essential concept to deliver more healthful and delicious meals to their customers. Here’s a look at how a few operations beyond the white-tablecloth segment bring fresher, higher quality products to their customers, along with some tips from the experts on how to solve the challenges that come with local sourcing. 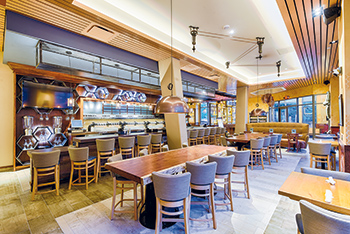 The front-of-the-house design at Tupelo Honey features natural colors to support the restaurant’s use of locally sourced ingredients. Photo courtesy of Rey LopezSouth Haven sits on Lake Michigan, in the southwestern corner of the state of the same name. It’s in an area known for its agriculture, particularly the apples, blueberries and peaches grown there. So when Amy Nichols took a job as foodservice director for the five-school South Haven Public Schools system two years ago, she made it a goal to increase participation from local growers. “We’re in the fruit belt here, so we use as much locally grown produce as we can manage,” she says, “and then we do put some up for the winter.” Last fall her staff packed fresh corn on the cob in Cryovac bags and froze it, which Nichols says was “a huge hit” with students.

Nichols finds allocating freezer space efficiently to be the biggest challenge in using local produce. Upon increasing the amount of fresh product, “we had to organize ourselves a little bit better” in terms of freezer storage, she says. Nichols also notes that standard operating procedures for fresh food prep had to be rewritten to ensure consistency and safety. For staff who were used to dealing with precut, prepared foods straight from the distributor, working with fresh food also presented a challenge. “It’s a little bit of a learning curve for my people. They don’t typically have the knife skills you would expect, but they’re easing into it.”

For any school system that wants to increase its local sourcing, Nichols recommends to “start small. Don’t think that you have to do your entire menu locally grown overnight.” And promotion is important, even in the K-12 world. “Public relations is a thing you’ve got to do,” she says. “The minute [the local produce] comes in, I take pictures and start Facebooking and tweeting about it.”

And, she adds, don’t be afraid to use your contacts. “Work with farmers you know. I have a pear farmer who only sells to me and [baby food manufacturer] Gerber because his grandkid goes to South Haven Public Schools.”

Although he has only been director of dining services at Smith College in Northampton, Mass., for less than a year, Andy Cox is no stranger to local sourcing. In his previous position as foodservice director at the Hotchkiss School in Lakeville, Conn., he oversaw an on-site garden as well as a smoker that produced ham and bacon. So Cox uses what he learned at Hotchkiss to expand the local sourcing of foods at Smith College.

“Based on my calculations, we are buying about 10 percent of our food from what we call real, sustainable or local sources,” says Cox. “Being in the Pioneer Valley, it’s great for produce. The fact that it’s in New England, though, means it’s a somewhat limited season.”

Having sufficient storage and freezer capacity — and using these resources in an organized, structured manner — plays a critical role in effectively managing a farm-to-table operation, Cox says. “You prioritize what you want to store and keep in bulk.”

Since he hasn’t had access to an IQF machine (a unit that helps freeze smaller-sized, individual food items such as raspberries), Cox shies away from doing whole-fruit or whole-vegetable freezing. He processes apples, for example, into apple butter or apple cider and then freezes those for later use. Lacto-fermentation or pickling, also allows Cox to store fresh food for use later in the season. Using 6-gallon, wide-mouth carboys, the type used in beer making, he can produce “months of sauerkrauts and kimchis,” Cox says.

At Hotchkiss, “we put in a root cellar,” he says. “Every potato we served from mid-October to February was grown on the campus. We stored butternut and acorn squashes, beets, carrots and celery root.” To process those potatoes, Cox invested in a centrifuge-style potato peeler.

Cox says it’s essential to do the research before starting a locally sourced program. “The first thing you do is not call the farmer and say, ‘Hey, I want to buy local. How do I make that happen?’ There’s a lot of prework that needs to be done before you’re ready to engage the local agricultural community.”

How does a restaurant stay true to its farm-to-table roots when it expands across various states? The Tupelo Honey Cafe opened in Asheville, N.C., in 2000. “It started as a Southern restaurant, very farm-to-table oriented,” says Christin Prince, senior vice president of marketing for Tupelo Honey. Over the next 15 years, the café expanded into South Carolina, Virginia and Tennessee, and it now has 12 locations.

“Since our origin was a farm-to-table restaurant,” says Prince, “as we grew we found that was not a viable direction for us because of supply. Sourcing from many farmers was not always the safest thing to do for the consumer.” The chain’s solution was to come up with what it describes as its Responsibly Sourced program. “As much as we can, we source from an individual farmer but, we want to know what their processes are, how they treat their animals and so forth,” she says.

“The way that we’ve set up our Responsibly Sourced program is to find partners of a certain size and capability with a really quality product that we can fold into our existing supply chain,” says Caitlin McMahon, Tupelo Honey’s director of purchasing. After finding a particular product, the chain works with its grocery distributor to get the product carried in the distributor’s regular stock. It’s a win-win for both Tupelo Honey and for the farmer since “we’ve never mandated that they bring them in only for us,” McMahon says. “We help that baker or farmer expand their reach and bring their product to
additional customers.”

With the increased amount of fresh product, “our walk-ins are twice the size they used to be,” says McMahon. That also meant some operational retraining. McMahon cites the chain’s shrimp as an example. Recently, Tupelo Honey made a switch in all of its restaurants from a farmed Asian shrimp to 100 percent American, wild-caught shrimp. Since the wild-caught shrimp can vary in size and weight and are not, as she says, “cookie-cutter farmed shrimp,” the product now has to be portioned by weight.

Letting customers know about the Responsibly Sourced ingredients is an important part of Tupelo Honey’s customer communications. Provisioner names are called out on the menu. “It’s on all of our menus,” says Prince. “At the very bottom, we talk about how we proudly serve fresh, made-from-scratch and thoughtfully sourced food.”

Farm-to-Table Design: The Experts Weigh In

Foodservice operators need to examine each ingredient in terms of “who is going to receive it, process it, clean it and store it,” he says. “Do you have the staff? Do you have the storage? Do you have the right capacity? Do you have the right vessel to store in?” Since many smaller farms don’t have the same cleaning and packaging capabilities as larger farms, food “could literally be coming in bulk, dirty, in unconventional boxes or packaging. At the back door, there needs to be a way to properly receive and then wash, clean and store ingredients.” That cleaning process, he says, could even include large-capacity sinks and spin dryers for processing fresh greens.

Designer Steve Starr, president of starrdesign in Charlotte, N.C., sees the prep area as one of the overlooked considerations in farm-to-table operations. “In traditional casual-dining facilities, in the past you really worked to limit the amount of prep space to a bare minimum,” he says. “Now there’s a whole new level of attention being paid to the true requirements of a prep station for each of the various food types.”

Turenne also emphasizes the need for careful consideration of prep areas. “A lot of places that transition to a program that’s more farm-to-table literally don’t have the table workspace to be able to put products on and work with them. I’ve been in some places where you’ve had to jerry-rig and move things around to get tabletops.” And having more prep stations necessitates additional smallwares, such as cutting boards, knives and pans.

Product processed in-house also requires a storage system. Turenne suggests using speed racks to hold product before storage. After prepping, culinary staff can place food on sheet pans and
set them in the speed rack until it is time to store the food. Large, stackable clear polycarbonate containers with volume gradations on the outside not only neaten the storage area but also provide easy visibility of the contents inside. Vacuum-sealing machines can also make quick work of storing mass quantities of fresh food.

When it comes to front-of-house design, both Turenne and Starr remain big proponents of open kitchen design. “It says to the customer at a subliminal level that food and food preparation is very, very important to us,” says Starr. “We are transparent about it, so we are going to show it to you and we are going to celebrate that.”

Showing ingredients and prep in an open area can help take away the “mystery meat” rap that is often laid on school foodservice operations, Turenne says. It’s important that any open kitchen be “managed right and things are kept clean and orderly. That includes not just the facility but the people, in their appearance and demeanor.”

For any type of operation considering using more locally sourced ingredients, Starr recommends to “really, really do your homework. Because it’s not easy. It does add a significant level of complexity, so the more you can account for this up front, the better off you’re going to be.”

Understanding seasonality and how it affects the menu is critical, according to Turenne. “If you operate in Birmingham, Ala., or you operate in Duluth, Minn., you’ve got different food available at different times of the year, which is going to drive your menu.” Rather than trying to convert a whole menu to local sourcing, he suggests “making decisions about how much seasonality you want to commit to, or you’re going to have some really limited menu items when you get into the lonely months. Or, you’re going to have to break your commitment and say, ‘I need tomatoes.’ If you want a seasonal menu and you don’t live in Southern California, outside of hothouse tomatoes, there’s not too many tomatoes available in this country past October or November.”