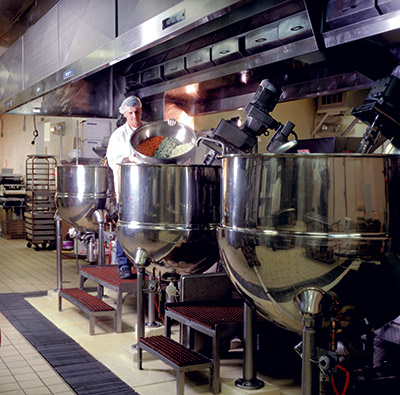 The Washington State DOC has implemented two high-volume food factories to help its program cut costs.When the Washington State Department of Corrections began transitioning management of its foodservice program in 2014, the goal was to not only align food manufacturing with meal demands but also to control costs and consistency while expanding opportunities for prisoners planning to work in this field.

CI operates two cook-chill foodservice facilities that are referred to as "factories," and it's easy to see why. The Airway Heights Corrections Center location totals 40,000 square feet, while the Coyote Ridge Corrections Center site measures 20,000 square feet. A 10,000-square-foot distribution warehouse stores frozen food, and CI uses a fleet of 20 trailers and 10 tractor trucks to transport food products to the prison sites.

Staff prepare food in 200-gallon batches and then pump it into 2-gallon bags for freezing prior to shipment to each prison. These food factories also handle a significant amount of baking.

"Many refer to us as a 'food and goods manufacturer,' and that's basically what our program does," says Jim Parker, CI's assistant director. "Cost and waste control are the biggest challenges in corrections foodservice, so we're very focused on the amount of food waste that's generated."

To better keep a handle on production and portion control statewide, the DOC started measuring the amount of leftovers as well as uneaten food remaining on inmates' trays. It also keeps track of nonfood items disposed in the waste stream, such as packaging, in addition to recyclables.

Recently, in an expanded effort to control costs, Washington's DOC invested a significant amount of money in a bar code system to better track the number of people coming through dining rooms at one time. "The bar code system has allowed the department to have a more predictable feel for attendance at each meal," says Parker. "For example, we can see the percentage of offenders who attended spaghetti night the month before to get more insight into the popularity of the meal and help gauge how many people we can expect in the future."

The use of a centralized menu remains consistent at all 12 facilities and operates on a 4-week cycle. "In the last year, we've changed things up in four CI-managed facilities, moving from hot to cold breakfasts," says Brad Simpson, CI's food service administrator. "This was mainly to gain efficiencies."

"The two food factories produce about 75 percent of the food for our prisons, with each lockup finishing kitchen rethermalizing products," says Simpson. "Everything comes in virtually prepared and is then heated and served or thawed and served."

With the exception of one, all prison kitchens were originally built to cook food from scratch and maintain traditional institutional layouts. "In food factories, there has been a transition with equipment over time," says Parker. "The spiral cooler was a huge improvement in terms of upgrading the quality of baked products, and our blast freezers are indispensable."

There have been ongoing changes with the kitchens' equipment as well. Several years ago, all deep fryers were removed and more recently grills were replaced. Steam kettles, tilt skillets and ovens now account for the primary equipment in the on-site kitchens. "With our current menu plan, there's not much call for a steamer," says Parker.

The biggest benefit since the changeover has been portion control. In the past, it was difficult to monitor and control serving amounts. As a result, the department was contending with gallons of leftovers and waste. "When kitchens cook from scratch, quantities prepared can be all over the board. With products that get reheated and come in a 2-gallon bag, we know exactly how much food is being prepared," says Parker. "With portioning, we can work toward progressive cooking, which allows us to get closer to true serving needs, rather than guessing."

"With the data gained from bar code scanning, foodservice operations prepare 80 percent of the historical demand and use progressive cooking to the end of the meal," says Simpson. "Predictable servings for each product line have significantly helped reduce overproduction, thereby reducing food waste."

Ovens will continue to play an important part in the DOC's foodservice operations. "We'll continue moving forward with equipment that allows us to be more efficient on the manufacturing side," says Parker.