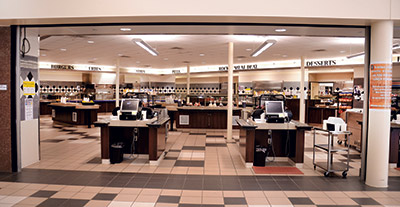 As Nebraska's capital city, Lincoln is unique due to its diverse demographics and the fact that it lacks surrounding suburban towns. Like the city, the Lincoln public school district is also distinctive and growing. With a total of 59 K-12 schools and 39,000 students, its self-funded foodservice program has undergone a number of upgrades and expansions over the years.

On average, each elementary school feeds 300 to 700 children, while middle schools serve 500 to 800 meals and each high school produces between 700 and 1,200 meals — all on a daily basis. About 70 percent of the students participate in the district's school lunch program.

"In the last 25 years I have been here, we've opened 13 new school buildings, and in the next 2 years we're opening up 2 more," says Edith Zumwalt, Lincoln Public Schools' director of nutrition services. "In that time, all of our older schools have been completely renovated, including the kitchens."

In addition to its food warehouse, the school district operates 56 on-site kitchens. Among these, 34 schools utilize finishing kitchens that are serviced by 6 central commissaries, which also reside within the schools. Zumwalt incorporated these central kitchens back in 1996 to save space and labor.

"Finishing kitchens have smaller footprints, which conserve more space for education, and save on equipment costs," says Zumwalt. "These employees also have a lighter workload, since there are no heavy mixing bowls or bulk production tasks to deal with."

With the large staff, high volume and extensive amount of foodservice equipment, the district emphasizes cleaning and maintenance to keep replacement costs to a minimum. This has been effective, with a number of kitchens still employing mixers and refrigerators that are more than 40 or 50 years old.

"When purchasing equipment, we consider the service life and how challenging repairs would be," says Zumwalt. "We also look at the training that's provided and whether a unit has quick recovery to handle our loads."

Despite the emphasis on maximizing the equipment's service life, a district of this size always needs to make a few purchases. "Each year, I put together a large bid to replace equipment that can't be repaired," Zumwalt says. "Although this amount varies from year to year, I'd say we spend close to $100,000 annually for new units."

In school districts, budgets tend to be tight. The Healthy, Hunger-Free Kids Act, championed by First Lady Michelle Obama in 2010, further tests these foodservice programs by instituting guidelines increasing the use of whole grains, fruits and vegetables in school meals. By the time the act took effect, Lincoln Public Schools had already changed over to using whole-grain flour for baking its rolls in house. Although these products were well received, that was not the case for the whole-grain pasta and whole-wheat tortillas. As a result, the district will ask for an exemption from incorporating these products into its program to keep participation numbers up.

A foray into healthier scratch cooking was not well received either, so the menu reverted back to offering more kid-friendly food, such as popcorn chicken in a healthier format that includes whole-grain breading.

"The biggest shock with the guidelines has been removing the sodium from meals, which was last year's initiative," says Zumwalt. "We really had to work with our recipes to make them more flavorful, which was a definite learning curve and is one of the biggest challenges we're still working on."

A healthier menu has not been so healthy for school budgets. Over the last two years, Lincoln Public Schools' meal prices increased 10 cents due to USDA regulations, which require districts to cover all food expenses. "Every year for the last 3-plus years, our prices have gone up 10 percent," says Zumwalt. "If we have enough of a cash balance in our account, we don't have to raise meal prices."

In terms of the menu, breakfast and lunch offerings vary, depending on the school, but operate on a four-week cycle. This will change to three weeks in 2016 to allow for quicker food turnover, which will minimize waste. Popular meals include kid-friendly standards, such as pizza, French toast sticks, popcorn chicken and mini corn dogs.

"We heat items on site, rather than transport food hot, which requires less labor in our finishing kitchens," Zumwalt says. "Convection ovens and boilerless steamers are integral to our operation as well as warming cabinets, which hold food hot on the line."

The district's foodservice program remains in growth mode and space is at a premium. Evidence of this is one elementary school built for 450 students, which recently added a second kitchen to accommodate the 1,100 children it now serves.

Lincoln Public Schools is also building a new elementary and middle school, the latter of which will have a central kitchen. Zumwalt estimates that $1.25 million worth of equipment will be purchased. "Blast chillers will become an important aspect of our new kitchens, which can accommodate leftovers and don't compromise food safety," says Zumwalt.

In addition, two existing elementary school kitchens will undergo complete renovations, one in 2017 and the other in 2018. "We're also replacing the serving line in one of our middle schools, which is an $80,000 project," says Zumwalt. Lincoln Public Schools will be purchasing a second central warehouse this year as well.