Leave it to acclaimed chef Richard Sandoval to create an edgy Mexican concept that has become a popular gathering spot for Washington, D.C.'s young professionals. 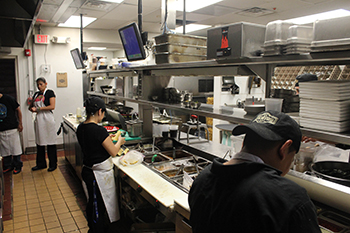 Like the back-of-house areas in most Mexican foodservice operations, El Centro D.F.’s contains a large prep area. Part of international restaurant group Richard Sandoval Restaurants (RSR), which has a lineup of more than 35 concepts, El Centro D.F. operates a pair of locations in the nation's capital. Touted as having the best Latin American cuisine by Washingtonian magazine last year, Sandoval partnered with sushi chef Kaz Okochi on this project. The success of El Centro D.F.'s first location on 14th Street three years ago led to a second site in Georgetown, which opened its doors in August 2013.

"Most of Richard Sandoval's restaurants share the same characteristics, such as emphasizing family recipes," says Graham Bartlett, RSR's regional executive chef. "With El Centro, the goal was to reach a younger D.C. clientele."

With a tequileria, where mixologists craft Latin cocktails, along with 200 tequila and mezcal selections and two rooftop bars, in addition to the taqueria, these restaurants have become hot spots for the hip. "As far as all of our six D.C. concepts, this is the one we're most confident has hit a home run," Bartlett says.

FE&S spoke with Bartlett to learn more about El Centro D.F. and what sets it apart in the Mexican segment.

FE&S: Richard Sandoval has a number of Latin and Mexican concepts. What distinguishes
El Centro D.F.?

GB: We benefit from our brand recognition, but food-wise it's the accessibility that sets El Centro D.F. apart. We're not a fine dining or a casual restaurant, but something in between. Our goal is to create unique food that a younger crowd can appreciate.

GB: We like to play around with ingredients, so we'll include dishes with duck, tongue, beef cheeks and octopus. Tacos are our most popular item, and we offer more than a dozen varieties that are changed out frequently. We change out the menu twice a year, but are continually adding new dishes to keep it fresh. We also are known for our tequilas and held a Tequila Month last July that included food pairings.

FE&S: Both El Centro locations offer identical menus. Are the kitchens set up the same?

FE&S: How is the back of house set up at the two locations?

GB: Looking into the kitchen, we have an appetizer station or pantry on one end with a couple of fryers. This is where salads, desserts and cold items are produced. In the middle of the line is the plancha and grill, which are the most utilized of all our equipment. These are used to grill meat and fish for tacos, small plates or composed dishes with starches, sauce and proteins. The plancha also is used a great deal for heating tortillas, which we make in massive amounts. It's crucial that these are grilled on both sides for several seconds, since this chemically changes the flavor. On the left side of the line is the sauté station with an eight-burner range used for preparing vegetables, fish, shrimp, eggs, rice and beans, among other items. The chefs are constantly building and garnishing dishes, so we utilize a long shelf by the stove with places for garnishes. We have a prep station that includes a lot of counter space and a convection oven as well. This includes a rolling speed rack in the middle for fresh tortilla masa [dough] prep. There is one large walk-in for perishables and separate refrigeration for alcohol. Refrigeration units also are located under the grill and plancha. In addition, each station includes a sandwich unit and steam wells.

FE&S: El Centro's back of house services a pretty specialized menu. What aspects do you look for in foodservice equipment?

GB: Brand recognition is important because we've learned you get what you pay for. Our units undergo a lot of wear and tear due to our high volume. For this reason, we buy new equipment and don't cut corners.

FE&S: The Mexican foodservice segment remains one of the most competitive. What are your plans to keep on top of trends?

GB: We're toying around with different ideas, one of which is adding an outdoor area with a gyro machine to roast legs of meat and carve it. This is a traditional practice in Mexico. We're always looking at new menu items and seasonal dishes to add. We have an aggressive agenda. It's important to always try and improve, whether it's with the food, style of service or ambiance.