After a few sluggish years, are sales at chicken-oriented concepts ready to soar again? If so, an efficient, volume-driven equipment package will be critical in getting sales off the ground. 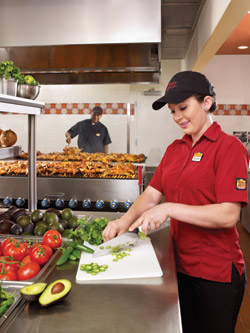 Salsa prep at El Pollo LocoWith the price of beef skyrocketing, the fast-food giants have conceded the burger wars and turned their focus to chicken.

"We're going to see a bigger focus on chicken products this year, due to the high food inflation costs, especially as it relates to beef," says Bonnie Riggs, restaurant industry analyst for The NPD Group, based in Port Washington, N.Y. "The major chains will be looking to promote more chicken items, since it has become more difficult to discount and promote beef dishes."

The major chains account for 84 percent of all visits to chicken specialty restaurants, according to NPD Group research. And, on the surface, this segment appears to be holding its own. Sales in the chicken restaurant industry totaled more than $19.1 billion in 2013, a 4 percent increase compared with the prior year, according to Technomic, a Chicago-based market research firm.

"Yet the category as a whole is not doing well," Riggs says.

Customer traffic at the major chicken chains has essentially been flat for the last three years. According to NPD Group, traffic in chicken-oriented chains was down 2 percent in 2013, up 1 percent in 2012 and down 1 percent in 2011. "Chicken restaurants have been weaker than the overall QSR segment," Riggs says. "The smaller chains were doing a little better, with traffic up 2 percent in the last year, but these are a very small portion of the marketplace."

On the bright side, in the last year, chicken sandwich sales increased 5 percent, and wing sales flew up 2 percent, according to NPD Group. "Still, sales of fried chicken were down 10 percent; nuggets and strips sales decreased 6 percent, and nonfried chicken sales dropped 3 percent," Riggs says.

As beef prices continue to rise and consumers seek healthier food options, the allure of chicken is expected to rise. This is good news for the chicken restaurant segment.