One "crazy" chicken concept was well ahead of its time. 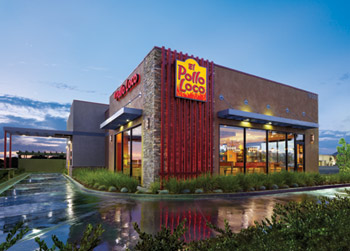 Currently in expansion mode, El Pollo Loco has approximately 400 franchised and company-owned restaurants in Arizona, California, Nevada, Texas and Utah.Indeed, the growth of both the chicken and Mexican food segments has been a win-win for El Pollo Loco. (The Spanish name translates to "the crazy chicken.") This is due to the fact that the 34-year-old chain of 400 company-owned and franchised restaurants is uniquely positioned to capitalize on the popularity of both food segments.

With locations in Arizona, California, Nevada, Texas and Utah, El Pollo Loco remains in expansion mode. Its 2013 sales totaled more than $604 million, according to Technomic, an increase of 7.3 percent from the previous year.

"Over the past few years, El Pollo Loco has been growing at rates that significantly outpace industry averages by refocusing efforts on what it does best, which is serving chicken meals and creating handcrafted Mexican entrées," says Mark Hardison, vice president of marketing for the chain. "The brand has introduced new product lines (such as the stuffed quesadillas), remodeled more than 150 restaurants and revamped its advertising campaign to focus on quality rather than discounted prices."

Citrus-marinated chicken fire-grilled in a 4-stage process for 50 to 63 minutes represents the core of El Pollo Loco's menu. The chicken is available in individual, family and catering portions. Its Mexican dishes, which include quesadillas and burritos, incorporate fresh ingredients inspired by authentic recipes. "Meeting today's demand for high-quality, great-tasting and healthier food at fast-food speeds is the biggest challenge," Hardison says.

El Pollo Loco's locations range between 2,600 and 2,800 square feet, with the kitchen consuming approximately 40 percent of this space. The back of the house's centerpieces are specially designed charbroilers that measure 4 feet wide and 36 inches deep. "This equipment has been made for us for well over 20 years," says Dan Milojevich, El Pollo Loco's director of facilities. "We tweaked the grate and burner designs [to meet our needs]."

Locations typically include five charbroilers, including one with a clamshell lid that cooks chicken breasts and thighs. "Due to cracking issues, we recently changed the charbroiler design to include stainless steel rather than cast iron burners," Milojevich says. "This has not only improved the longevity of the equipment, but also has helped us maintain product quality and consistency."

El Pollo Loco also switched from marinating by hand to utilizing a marinating tumbler, which improved the uniformity of its chicken product. Other primary equipment includes a quesadilla grill for quesadillas and burritos; single dual-tank, high-efficiency fryers; and custom refrigerated prep tables, as well as ice machines for the back and front of house, undercounter refrigeration, a walk-in refrigerator and either a single or two-door upright freezer.

Depending on the age of the store, main burrito stations either have remote or self-contained refrigeration systems. "We try to implement [as much high-efficiency] equipment as we can," Milojevich says. "We do some equipment customization, but try to use efficient units that are not custom, as well."

El Pollo Loco is testing and installing variable-speed exhaust systems in an effort to increase energy savings. "This also will create quieter and more comfortable kitchens, while providing better temperature control," Milojevich says. "We do a lot of testing with equipment, including peak load shifting, and serve as early adopters by volunteering information for test studies."