It isn't unusual for a restaurant concept to be reinvented. It is less common, though, for a foodservice operator to jump into an entirely different segment. This is what happened with the Raleigh, N.C.-based business now known as Rocky Top Hospitality, which has gone through many incarnations in the last 16 years. 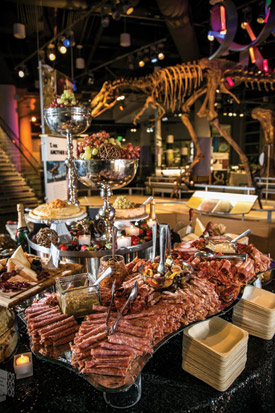 Rocky Top’s catering offerings include elaborate meat and cheese displays.It began in 1998, when Raleigh restaurateur Dean Ogan opened his flagship seafood restaurant, Michael Dean's. Eight other restaurant concepts were created in the next few years, including a microbrewery, Spanish tapas restaurant, sports bar and American café. At the end of 2012, Ogan divested to focus on three restaurants and his burgeoning catering business, Rocky Top Catering, which he first opened in 2004.

"Due to customer demand, we've spun our focus from being a restaurant group that caters to a catering company that has restaurants," says Kevin DeHimer, catering sales director. "We are doing a lot more catering now compared to two or three years ago."

In addition to serving as the exclusive caterer at a downtown Raleigh museum and the Blue Zone at the University of North Carolina's Kenan Stadium in Chapel Hill, Rocky Top caters at 1705 Prime, a restored Southern home outside Raleigh that includes a full kitchen and a variety of small and large rooms for multiple events. As a full-service caterer, Rocky Top will also cater at any off-site location, including businesses, private homes and special event venues.

"The museum can accommodate up to 1,500 people for events," DeHimer says. "We've been the caterer for the Blue Zone for three years, handling everything except the concessions. We have a catering kitchen on UNC's campus and have accommodated close to 8,000 people at a single event."

The three catering locations share staff, although each site has a general manager or director, a salesperson and an executive catering chef. Company-wide, Rocky Top employs about 25 full-time and 300 part-time employees.

Approximately 90 percent of Rocky Top's menu items are the same across all of its catering operations, although dishes can be customized for weddings and other events. The company also tweaks menu items for sporting events to resemble more traditional arena fare. Staff make the dishes from scratch, with the majority of the ingredients procured from North Carolina.

"We work around many of our past and present restaurant concepts to develop our signature items, such as Dean's crab cakes and Twisted Fork desserts," DeHimer says. "Overall, I'd say our menu is predominantly upscale Southern comfort food, which includes chicken and waffles and shrimp and grits."

Catering offerings include displays, such as gourmet or domestic cheeses, fresh fruit and flavored popcorn; hot and cold dips served with either lavash or tortilla chips; vegetarian fare, including fried four-cheese ravioli and wild mushroom risotto cakes; seafood and meat dishes, such as prosciutto-wrapped scallops and Thai chili-glazed chicken skewers; various food stations, such as meat carving and mac and cheese; hot and cold sides; and main dishes, including herb-crusted pork loin and traditional beef lasagna. Due to the production limitations of off-site events, some menu items may not be available at certain venues due to lack of space or limited equipment there.

"Our production process is dependent on the number of people being served," DeHimer says. "As much prep as possible is accomplished in our kitchens. Larger events require food to be prepared in bulk in our kitchens, then finished on-site."

Rocky Top owns and rents equipment for off-site food preparation. The most integral equipment for off-site jobs is electric hot boxes for holding food and propane fryers and convection ovens. The company operates three catering kitchens, although one also is used for the museum's Daily Planet Café. "We prepare catered items in a separate section of that kitchen, but the same chef prepares items for both operations," DeHimer says.

On-site equipment includes grills, flattops, tilting skillets, ranges, convection ovens and both walk-in and reach-in coolers. The UNC kitchen also has a smoker on-site. Rocky Top is looking to add induction cooking units for use in its museum operations, which prohibits the use of open flames.

The biggest challenge in running a catering business like Rocky Top is the limitations of off-site facilities and event sites.

"For example, we can't use open flames in the museum, so action stations and certain cooking methods are not options for us. One of our most popular venues, The Stockroom in downtown Raleigh, has no space for frying or additional equipment that may be needed," DeHimer says. "We have to put more thought and focus into menus that will be more restrictive due to the event location."

Because many of Rocky Top's competitors have been caterers and the company comes from restaurant roots, its focus is unique. "The service aspect of our business is not from a catering mindset, but more equal to a restaurant setting," DeHimer says. "There is more detailed interaction between servers and guests, which gives us an edge. We consider our customer service as important as our food quality and expect the best in both areas."