To help satisfy consumers' cravings for all things burger, foodservice operators are turning to equipment packages that emphasize speed of service and energy efficiency. 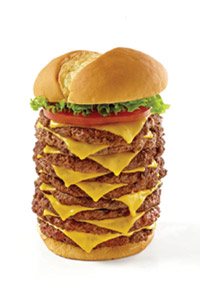 In recent years, this homely favorite has taken on more of a gourmet twist with the addition of unique toppings, innovative meat mixes and creative bun types. These developments transformed what was once a basic entrée into an upscale, and sometimes pricey, meal.

"The opportunity in this segment is big," says Bonnie Riggs, restaurant industry analyst for The NPD Group. "Consumers love burgers more than any other main dish."

Burger servings in 2012 totaled 8.6 billion, down from a peak of 9.3 billion in 2010, according to The NPD Group. "This has a lot to do with the fact that we have food inflation and beef prices, in particular, are extremely high," Riggs says.

As a result, operators now focus on incorporating less costly meats on menus, like chicken, which resulted in fewer burger promotions. "We're also seeing less double cheeseburgers on value menus, which has impacted burger serving numbers, but it still goes without saying that there is still much potential in the burger segment," Riggs says.

According to Technomic's Top 500 report, which details sales and unit growth for the segment's top chains, a number of burger concepts have seen impressive growth. These include Jake's Wayback Burger, with sales increasing more than 56 percent; Smashburger and Habit Burger Grill, both with sales growth of more than 42 percent; and Shake Shack, with sales rising almost 33 percent in the last year.

Fast food outlets account for 87 percent of all burger servings, with fast casual accounting for 2 percent, family style at 4 percent and casual dining at 7 percent, The NPD Group reports. "When looking at the most popular burger types, such as large burgers, mini burgers and bacon cheeseburgers, 43 percent of all fast-food burger servings are large burgers, compared with 17 percent in full-service restaurants," Riggs says.

"Although the burger segment is getting a bit crowded, fast-casual burger sales are growing, so there is opportunity to be had in those outlets," Riggs says.