Named after the NFL coach with the most wins in the league's history and created as a more casual offshoot of a successful steakhouse chain, Shula Burger already had a lot going for it when the first location opened in 2011 in the Florida Keys. 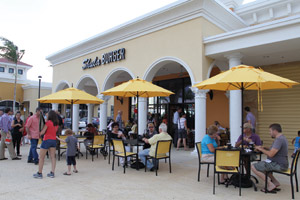 Named after NFL coach Don Shula, Shula Burger is a more casual offshoot of its sister steakhouse chain.Yet, as the namesake of Coach Don Shula and his son Dave, the latter a former NFL player and coach as well as the company's president, this fast-casual, upscale burger concept refuses to rest on its laurels. "Coach Shula's name opens doors for us, but the burger segment is highly competitive, so finding points of differentiation and consistently executing is always a challenge," says Peter Farrand, vice president of operations for Shula's Steak Houses. "Everyone has their own idea of the perfect burger."

Today the chain has 14 steakhouses scattered across Alabama, Arizona, Florida, Illinois, Indiana, New York, Pennsylvania, Texas and Virginia, and cross marketing and brand awareness have been beneficial to the success of the young burger concept's four Florida locations. These prototypes feature a number of parallels with their sister steakhouses, such as incorporating the same Black Angus beef that includes a custom blend of chuck, short rib and brisket.

"We played around with different percentages of these meats to get the beef flavor and moisture for our current blend, which is now served in all of our concepts," Farrand says. In addition to the steakhouses, these include the eight Shula's 347 Grill locations in Florida, Georgia, Rhode Island, Utah and Virginia; three Shula's 2 locations in Florida and Ohio; Shula's Bar & Grill sites in Florida's Ft. Lauderdale, Miami, Jacksonville and Tampa airports; and Shula's on the Beach in Ft. Lauderdale. Shula Burger's initial location in the Florida Keys is now a Shula's 2.

"Our menu is chef-driven, with unique items and flavor combinations," Farrand says. "Customers not only want nostalgia, but also big, bold flavors and highly seasoned food."

"Our DNA includes big steakhouse wines, so we've incorporated less pricey alternatives of some top labels for our burger concepts," Farrand says. "We've integrated some great wines in the restaurant that are aggressively priced to provide superior value to the customer, while helping us boost our check average."

Six-head keg coolers also dispense both local and national beers at Shula Burger's 4 locations, which measure between 2,000 and 2,400 square feet each.

Although the kitchen allocation totals only 900 square feet, the back of the house, complete with its under-fired charbroiler front and center, is the focal point of the restaurant's design. Other main pieces of equipment include a flattop griddle for toasting buns and preparing veggie and turkey patties and hot dogs; a three-unit fryer bank; a six-burner range for bulk prep that includes a convection oven for baking cookies; and an infrared cheese melter.

The pickup side of the cookline formation features a pizza prep table that contains salad ingredients and burger toppings, a two-well steam table for hot toppings and a worktop freezer that supports the fryer bank.

"When purchasing equipment, reliability is the most important factor, since the charbroiler, flattop griddle and fryer are on all day," Farrand says. Energy efficiency represents another consideration. Shula Burger now uses high-efficiency fryers that use 30 percent to 40 percent less oil than traditional fryers.

"From an employee standpoint, we make our staff aware that not all of the charbroilers need to be used at all times," Farrand says. "At nonpeak periods, only a third of this equipment is on."

When purchasing cooking equipment, recovery time is another key consideration. "We are currently looking at an 'instant on' cheese melter, which is activated automatically when an item is placed in it," Farrand says. "These units will not only be energy savers, but also reduce the amount of heat generated in the restaurant."

Along with its menu overhaul, Shula Burger updated the décor in its newer locations, with the communal table moved into the open kitchen window to serve as a chef's table. "We also changed out our wine machine, replacing it with a two-zone temperature refrigerator that holds both red and white wine," Farrand says.

Expansion is on the agenda for the chain, which plans to be a franchise-driven operation in the future. In fact, Shula Burger is developing a site in Florida's Kissimmee area. "We're looking for 5 to 10 area development agreements in locations that make sense," Farrand says. "Although our concentration is in Florida right now, we have possible opportunities outside of the state, and we foresee Shula Burger going cross-country similar to the steakhouses."

The focus will remain on differentiating the concept and meeting the Shulas' high expectations. "The quality of the product, service and consistency of our restaurants will continue to allow us to be a viable concept," Farrand says.