Developing and maintaining widespread appeal that spans multiple generations can be a challenge for any chain, but it has been the mission of Jake's Wayback Burgers. The Cheshire, Conn.-based fast-casual chain has 72 locations across 23 states and plans to open sites in 28 countries throughout the Middle East and North Africa region. 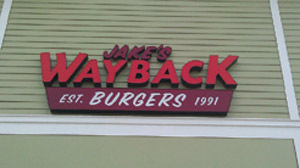 Jake’s Wayback Burgers has 72 locations, operates nationally in 23 states and plans to open sites in 28 countries throughout the Middle East and North Africa region."The word 'wayback' doesn't stand for any one thing," says Richard Tarascio, the chain's vice president of procurement. "It encompasses any generation, older or younger."

Jake's sites, which are all franchised with the exception of two locations, focus on fresh. "There are no microwaves, and everything is made in front of customers open-kitchen style, which is very appealing," Tarascio says.

The chain's estimated sales for 2012 totaled about $50 million, a more than 56 percent increase from the year prior, according to Technomic. Unit growth was more than 40 percent in the last year.

When franchisees began expressing interest in making menu changes, there was a consensus on what items to keep and which to discard. The chain also hired Greenbaum Marketing, based in Las Vegas, to redesign the menu's layout and update its branding.

FE&S spoke to Tarascio about how the chain has thrived and grown in the ultracompetitive burger arena.

RT: We are a fast-casual operation, where customers order at the counter and food is delivered to the table or offered to go. Customers can call in orders and order online, as well. Our smallest location is 650 square feet inside a mall, while our largest restaurant is 2,900 square feet; but the typical size of a Jake's Wayback is about 1,600 square feet. We are currently a few months into a menu overhaul.

FE&S: How has the menu been revamped?

RT: The menu used to include the name of the dish and descriptions, but now instead of a description, we have included photos to make products more visual for our consumers. When we implemented the menu optimization change, we'd provide certain demographic markets with the opportunity to offer former Burgers of the Month that were strong sellers. This included a 100 percent Iceland Cod Flaky Fish Filet sandwich in Connecticut and the Philly Burger in Philadelphia. However, in some markets, the menu stayed the same. We also added a Cheesy Burger and Double Bacon Jake to all of our menus. We were doing great with our Burger of the Month, so although the menu wasn't lacking, we were able to add another element of upsell.

FE&S: What are your best sellers?

RT: Our signature item is the Jake Burger, which is a two-patty burger with cheese that customers can customize with any toppings. The Double Bacon Jake is a strong seller. A new implementation is the Triple Triple, a nine-patty burger topped with nine slices of America cheese, lettuce and tomato. We used to make these for burger-eating contests. One of our signature side dishes is the Irish Nachos, which includes house-made potato chips, with cheese, chili, onions and jalapeños. We also offer more than 12 different milkshake flavors. Our menu is versatile, as we include not only burgers, but also grilled and crispy chicken, turkey burgers, all-beef signature hot dogs and a slew of sides.

FE&S: How does the back of house support the new menu?

RT: Our open kitchens are approximately 400 square feet. These include a refrigerator and freezer, undercounter freezer, griddle, fryers and hoods. We recently incorporated a quick-recovery griddle in an effort to further increase our speed of service and enhance the quality of our offerings. We are testing it in a few of our locations, but will implement it in more sites in the future. Our back room houses one walk-in freezer and a walk-in refrigerator. We also try to go green where we can. Our floors are comprised of all recycled materials. We also just started changing out fluorescent lighting for LED in a couple of locations.

FE&S: Describe the ambiance in your locations.

RT: Our décor isn't from one era, but is an eclectic mix of different items. This includes a glass-and-chrome chandelier with dome lights in the dining room and a barn-board red look on walls. Customers can watch their food being prepared at a sit-down counter or from butcher block tables.