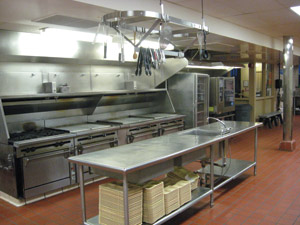 The main cooking line in Ramsey County Correction’s adult facility kitchen includes a stove and three flat tops."We are considering combining the juvenile facilities into one and merging the outdated kitchens, one of which was built in 1936," says Tim Thielman, lieutenant for Ramsey County and Region 3 director of the Association of Correctional Foodservice Affiliates.

Thielman now oversees foodservice for the two juvenile facilities which includes Boys Totem Town (BTT), a residential program facility for up to 85 adolescent boys who have been adjudicated delinquent by the Juvenile Court, and the Juvenile Detention Center (JDC), a co-ed, 86-bed secured facility for unsentenced juvenile offenders. The facilities also include a 558-bed adult corrections facility with a staff of 188. Between the three facilities, 1,500 meals are served daily.

Although each facility has a kitchen on-site, there also is a central kitchen at the adult prison. "We do ship some food out of the central kitchen, while other dishes are prepared on site," Thielman says. "We are in the process of finding a consultant to redesign the central kitchen, which will be a complete overhaul." The adult facility, which was built in 1959, has much of its original equipment. This includes steam kettles and a conveyor dishwashing unit.

"In 2009, a 24-pan rotary oven in the bakery was replaced with a 36-pan rotary oven," Thielman says. "A couple of years ago, to address the healthier eating trend, we eliminated the deep fat fryer and replaced it with a combi oven. Now we are working on replacing our dishwasher, which is more than 30 years old."

The goal is to incorporate more modern equipment, such as updated warewashers and combi ovens, which can help decrease the amount of labor in the back of house.

"It's important that we are able to program our equipment in order to spend more time doing other tasks," Thielman says.

The adult facility's kitchen features three flat-top griddles, a stove, steam kettles, a tilt kettle, steam chest, two conveyor toasters, walk-in coolers and freezers, hot holding cabinets and several proof boxes. The recent elimination of fryers has saved thousands of dollars in oil costs. Also part of the adult facility kitchen is the bakery, where staff bake more than 50,000 loaves of bread each year. Equipment in this area includes a sheeter, dough dividers, a bread slicer and a mixer.

"We are always looking for ways to save time," Thielman says. "We used to roll bread by hand, but purchased a sheeter that has been a big time-saver."

When purchasing equipment for the corrections segment, it can be difficult justifying the cost of pricier units that may save time and labor. "Many times, with government entities, it's more about going with the lowest bid rather than what we want or need," Thielman says. "When I replaced the fryer with a combi oven, the oven was more expensive, so I had to justify the benefits and payback."

In corrections foodservice, it's also important that equipment stands up to the tough environment. "There is lower end, less expensive equipment, but this won't hold up to the abuse from the inmates, which is key," Thielman says.

Because inmates have unlimited time to tamper with equipment, safety features are standard on all of Ramsey County's Correction facilities' equipment, with all units including packages that secure controls.

"Unfortunately, sometimes good security features create a problem," Thielman says. "For example, the prison package that I had put on the sheeter is labor intensive to take apart for daily cleaning due to security screws. This is why it's important to work with vendors and communicate what's needed. They are invaluable resources."

Despite the fact that the kitchens utilize inmate labor, which is free, it recently became necessary to cut down the hours of operation. While baking used to take place from
6 a.m. to 6 p.m., the kitchen now shuts down in the afternoon, reducing the hours to eight. As a result, bagged meals are served to inmates at night.

Staff in the adult facility kitchen prepare lunches for one of the two juvenile facilities. Here, food is prepared, panned and and transported in bulk using carts and a vehicle. Dinners are prepared on site at the juvenile facility. "At the adult facility, we feed about a quarter of the population cafeteria-style in the dining room and the rest of the meals are portioned out in trays for those in the custody unit," Thielman says.

With shrinking budgets and rising food costs, the challenge is finding a balance between nutrition and price. Unfortunately, due to school nutrition regulations, which apply to the juvenile facilities, calories cost money.

"The requirements for school nutrition are definitely a factor, because if we want federal reimbursement for meals, we have to follow those guidelines," Thielman says. "The trend in school nutrition over the years has been about shrinking labor and more convenience foods, but the new requirements mean many operations are reverting back to scratch cooking."

Operating an environmentally friendly foodservice program has been a top priority, as well. The Ramsey County Corrections Facility recycles and recently eliminated the use of its garbage disposal by composting. "We give our food waste to a local pig farmer, which has reduced our water and electricity use from the garbage disposal as well as the amount of garbage in landfills," Thielman says.