When it opened in March 2011, Salt River Fields at Talking Stick in Scottsdale, Ariz., was not just distinguishable as the first Major League Baseball facility located on Native American land, but also as a stadium seeking to raise the bar for traditional ballpark fare. 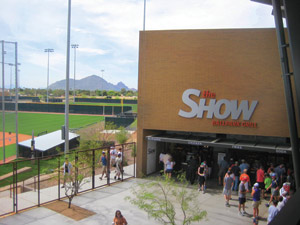 Salt River Field’s concourse is open to the ball field for easy viewing.Serving as the spring training home of the Arizona Diamondbacks and Colorado Rockies, the stadium includes 13 ball fields, 7,000 seats and a lawn that accommodates an additional 4,000 fans. When Salt River Fields was built in the Salt River Pima-Maricopa Indian Community, the goal was to create a state-of-the-art baseball facility that would provide a great fan experience, with food as a big contributor.

Salt River Fields' foodservice program encompasses 8 permanent concession stands and 29 portable locations, which creates a point of sale ratio of 1:118. That amounts to 1 concessions worker per 118 customers; the industry standard is 1:250.

The enhanced speed of service – along with concourses that are open to the ball fields – has helped eliminate the biggest complaint from baseball fans: missing plays while waiting for a hot dog or beer. "There are typically no lines in these concession areas and, when there are, they move quickly," Satenspiel says. "This is reflected in the facility's high food and beverage revenues."

Along with traditional ballpark fare like hot dogs, pizza, nachos and beer, the stadium offers unique selections, such as giant hand-rolled burritos with carne asada, Philly cheesesteak sandwiches, wok-fired soba noodles, barbeque brisket sandwiches and wraps. Customers can elect for healthier fare, like salads and the leaner bison dogs, as well as vegetarian and vegan menus.

The stadium's signature item is a ballpark stalwart, the hot dog, but with a twist. The menu includes New York Dogs, Chicago Dogs, Arizona Dogs and Colorado Dogs, focusing on regional topping favorites. Food offerings also pay homage to the area and its residents. For example, Verde, a concession stand located in the outfield, incorporates local and Native American items, including fry bread.

"We incorporate equipment that may be pricier, but offers longevity," Max Van Rees, Ovations' vice president of facilities planning. "We look for units that are built well and can perform in difficult environments. This equipment has to save time and deliver a better-quality product, because that's what stadium customers are seeking."

All food at Salt River Fields, including items for the facility's four suites and three picnic areas, is cooked to order, with an eye on both presentation and value. "Customers can see their food being cooked, which makes a big difference when commanding the food prices we do at these facilities," says Van Rees. "In a typical catering setting, customers place their order, and we serve the food from a hot box. At Salt River Fields' picnic areas we grill hot dogs, hamburgers and other items in front of customers, so the focus is on the presentation."

Salt River Fields also sells more than 40 types of beer, including regional microbrews at its Beers of Colorado and Beers of Arizona booths. So along with the quintessential hot dog rollers, the most valuable equipment at the stadium is the draft beer system. "We have probably used every beer system ever made and have chosen a line that provides 30 percent more yield per keg, because those are a lot of dollars in our operators' pockets," Van Rees says.

This stadium places a specific focus on being as environmentally friendly as possible. Ovations works with architects, designers and equipment suppliers to source energy-efficient equipment to help bring operating costs down. "We look for equipment that is Energy Star-rated, since many power companies give energy credits for specific equipment," Van Rees says. "This brings more net dollars to our clients and reduces costs. That's been our focus in recent years."

When baseball's spring training season wraps up, Ovations evaluates the menus to see what works and what doesn't, and then makes adjustments for the following season. Currently, Ovations has no plans to tweak the stadium's menu for next season, since food items are selling strong.

"This facility is used from mid-February to the end of March, but since we're in Scottsdale, we are now trying to turn Salt River Fields into an 11-month facility," Satenspiel says.

Salt River Fields has become somewhat of a food mecca in its off season. Last October, it hosted a big Oktoberfest celebration, and this past January, the stadium ran a food truck festival.

When it comes to speed of service and innovative menus, this food-centric stadium is setting the bar high for its larger predecessors.