Coffee Competition Heats Up One Cup at a Time

As new technology streamlines the segment, consumers’ appetites for caffeine-inspired beverages and the coffeehouse experience  provide these limited-service restaurants  with a jolt of competition. 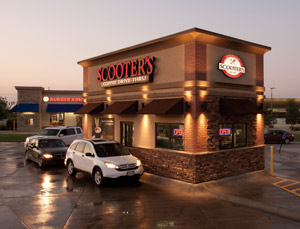 Scooter's Coffee Drive ThruCompetition continues to percolate in the coffee segment as large chain operators like McDonald’s seek to grow their sales through caffeine-inspired beverage programs.

“Overcoming the bad coffee objection has been successful for many large foodservice operators,” says

Ric Rhinehart, executive director of the Specialty Coffee Association of America (SCAA), based in Long Beach, Calif. “The high-end coffee operators have had to refine the level of differentiation in product and service quality to compete effectively.”

There’s no disputing that coffee is big business. In 2012, coffee was the second-most commonly consumed beverage in the U.S. on a past-day basis, following only water, according to the National Coffee Association’s (NCA) 2012 National Coffee Drinking Trends Study.

More Americans now seek upscale coffee beverages, including espresso, latte and flavored coffee, rather than the traditional cup of joe. In fact, gourmet coffee accounted for 46 percent of all coffee consumed in 2012, according to the NCA report. Of those drinking brewed coffee, more than a third added flavoring and sought coffee outside of their homes.

Although there was a time when coffee cafés were adding full menus to create additional revenue during the lunch daypart, today these operators are more likely to downsize food offerings to focus on beverages.

“Over the past three to five years, we have seen highly successful coffeehouse operators at the specialty end focus more on coffee and less on food for a variety of reasons,” Rhinehart says. “Food production in a coffee environment can be distracting for customers and staff alike. Those operators most dedicated to coffee quality have found that they are best served by minimizing their food offerings.”

New technology is revolutionizing and streamlining the coffee segment. “The production of brewed coffee beverages has seen a number of changes, with a focus on production and holding in large batches giving way to optimizing extraction and new technology for single-cup or custom-beverage applications,” Rhinehart says.