Hotel foodservice operations are among the most diverse because, in many instances, these businesses must be multifaceted. This can be particularly challenging for a restaurant that has made a name for itself by offering creative, cutting-edge, modern gastronomy such as molecular cuisine. 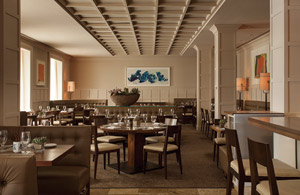 Clio’s white tablecloths were retired to provide a more informal feel in the front of the house.For the last 15 years, Boston's Clio Restaurant has not only become distinguishable as a destination in the city, it has also provided 24-hour room service for the 95-room Eliot Hotel and serviced an average of 3 banquets a week.

Owned and run by chef Ken Oringer, recipient of the James Beard Award in the "Best Chef: Northeast" category and winner of the Food Network's Iron Chef competition, the restaurant offers French food with an Asian influence. "Chef Oringer pioneered the model for what modern cuisine is now," says Tom Mastricola, general manager. "Our food is current and super creative."

When the hotel opened in 1939, it included a banquet space that eventually became the Eliot Lounge. "In the '80s, the lounge and its bar were popular spots for old-school
Boston Red Sox players and the city's elite," Mastricola says.

Located on the boutique hotel's bottom level, the space was previously expanded to include the 66-seat restaurant, but the bar area remains in its previous spot in front. Clio underwent a renovation in early 2012 to create a less formal atmosphere. "We got rid of the white tablecloths to create a more relaxed feel," Mastricola says. "We also added a leopard-print rug and more whimsical plate-ups and artwork to match the bar area."

Although the atmosphere was altered, the dining experience remains the same and includes a menu that evolves daily. Popular dishes include cassoulet of lobster and sea urchin with parsnip milk, chili threads, anchovies and candied lemon. Clio also has what Oringer refers to as a serious "foie gras program." "Right now, we are offering it with black lime, green chartreuse and turnip water," says Oringer. "A popular seasonal dish is venison, which we are currently serving with pine nuts, celery root and a wine glaze."

Room service, offered 24/7, only comprises about 5 percent of Clio's business. This menu is separate and traditional, with the requisite comfort foods. Items offered include steak, burgers, pizza, sandwiches and salads. "We do not typically offer Clio's menu in the rooms, but if guests inquire, we will make it happen," Mastricola says.

The hotel offers banquet service in two rooms on a lower level. The larger space holds between 50 and 75 people, while the smaller room fits up to 20. During the holiday season, Clio holds as many as eight private parties a week.

The main line includes a cook-and-hold oven, a six-foot flattop range, a six-foot sauté station, a hibachi-style coal grill and two immersion circulators for sous vide cooking. The line also includes a cold station with a drop-in unit. "We don't do much fried food, but have two small fryers for the sashimi bar's tempura," Oringer says.

The separate pastry department on the lower level includes a dry storage area with a walk-in refrigerator, a vacuum packaging machine, two convection ovens and a sugar cane crusher. "This area also contains a rotational evaporator, which is like an electronic distiller," Oringer says. "We also utilize medical-grade centrifuge equipment to spin out liquids of different densities, such as separating pulp from orange juice."

Clio is a green restaurant, so most of the foodservice equipment is energy efficient and incorporates newer technology. "Durability and quality also are important aspects we look for in our equipment," Oringer says.

Overcoming the many challenges of being a multifaceted hotel restaurant has not been easy, but Clio has obviously stood the test of time.