In foodservice, a business concept can get lost in translation when a chain moves from one country to another, even when the two nations speak the same language. 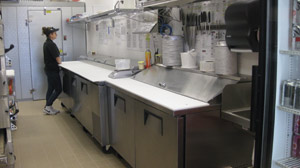 Raw crusts are stored in a walk-in and then rotated out as needed to the long prep line.Created by Gerry Koutougos in 2001 as a Canadian pizza delivery concept, the Sarpino's chain expanded into the U.S. with the opening of a Phoenix location in 2003. Over the next year, the chain opened close to 20 American sites. During this time, Dmitry Shapiro, the Sarpino's area franchisor for Illinois with his company KDD Sarpino's of Illinois, opened two stores in the Chicago suburbs of Des Plaines and Riverwoods.

"At the time, both locations were not performing profitably," Shapiro says. "We knew we had a good product and great recipes, but were lacking in terms of advertising, marketing procedures, operations, cost controls, team training and delivering a customer experience. Nothing sells by itself in the U.S."

As a result of these challenges, Shapiro sat down to examine his options. "We realized that the pizza industry offered a huge opportunity, so the impetus was on us to create successful pizzerias," he says.

In 2004, Shapiro renewed his determination to make both of his Sarpino's sites profitable by implementing more effective procedures and a more extensive and comprehensive training program. The goal was to develop a system that would turn these businesses into moneymakers. It was evident that the changes were effective when, in 2005, KDD Sarpino's of Illinois purchased the company from Koutougos and renamed it Sarpino's USA. Yet the work had just begun.

"We had franchisees in 11 states, with some locations operating and others not yet open," Shapiro, president of the re-established company, says. "We needed to train people and replicate the system we had put in place."

After extensive franchisee and employee training, as well as investing in marketing and an online presence, some franchisees stayed on board, while others closed their doors. "It was a cleanup period for the company for about two years," Shapiro says.

Fast forward to 2013, and the chain has expanded significantly to include 47 stores throughout Illinois, Iowa, Minnesota, Missouri, Kansas and Texas, with 6 more under construction. Some Canadian sites still operate under the Sarpino's International moniker. "Our biggest market is Chicago, and second is Minneapolis," Shapiro says. "We will embark on more state expansions this year."

The focus of Sarpino's overhauled operations is delivering customer experience. This includes all interactions with the company, both on a personal level as well as electronically. The new standards incorporate how staff receive phone calls, the website's usability, pizza delivery times and how to address mistakes. "With all of our metrics, we measure not only how many customers we have, but also how often they come back," Shapiro says. "We are in a business where thousands of little things need to be done right, and our system focuses on these."

Sarpino's locations typically measure between 1,200 and 1,600 square feet, with 10 feet designated for the customer area and the rest comprising the kitchen. All stores are delivery only. "We built a few sites with sit-down areas in the past that are still in operation, but found that this concept doesn't work as well for us," Shapiro says.

Like the concept, Sarpino's features a simple menu consisting mainly of traditional pan pizza made from scratch.

Customers can choose from about 40 specialty pizza category selections, such as the Canadian, which includes smoked bacon, pepperoni, Canadian bacon, mushrooms and a cheese blend, and the Mexicana with ground beef, onions, chili peppers, green and red peppers, tomatoes, jalapeno peppers and a cheese blend. Not all selections are carried by each store, and franchisees can tailor their offerings to the local market.

Customers can also create their own pies by choosing from 50 ingredients, which range from the traditional sausage, onions, pepperoni and olives to the more atypical baby clams, sauerkraut, sesame seeds and pickles. Dip and porcini peppers are included free with each pizza order. Other items on the menu include five traditional pasta dishes, eight calzone varieties, six salad selections, five sandwiches and cheesecake or tiramisu as dessert options.

Sarpino's locations feature an open-concept kitchen that allows customers to see pizza production from the front area. Staff make pizza and meat sauces at each location and shred the edam and mozzarella cheeses procured from a Wisconsin farm. In addition, staff prepare, stretch and age the dough in advance of the lunch and dinner rushes. Uncooked crusts in pans are stored in walk-in coolers and then rotated out to the long topping line when needed.

The prep area consists of a stainless steel table and 60-quart dough mixer, which is also used with attachments that prep vegetables and shred cheese. This section includes a double conveyor oven with a stainless steel packing table on the opposite side. Here, staff package the pies in boxes and place them in a warmer until a delivery driver or customer picks up the order. "We try to automate whenever we can, because all prep is done in the store," Shapiro adds.

Because equipment breakdowns tend to happen during the busiest periods, reliability is the most important factor with Sarpino's equipment. "We like to purchase brands with good reputations and service," Shapiro says. "We typically choose standard models without the bells and whistles that reduce the cost of investment and provide simple operation."

Sarpino's also recently relocated its headquarters to a new building in Lincolnshire, Ill., and will open a training center at the site.

"We basically built a training center in the office," Shapiro says. "The walk-in cooler is a little smaller than in our stores, but otherwise the rest of the equipment and layout is identical to our locations."

For a former Canadian pizza delivery chain, Sarpino's quick expansion and effective business model have proven that there is opportunity to be had for customer-focused concepts.