In an effort to reduce the massive amount of energy used to heat water, The Cheesecake Factory enlisted the help of Sun Light & Power, a Berkeley, Calif.-based firm that designs and builds solar panels for companies, to install the light-catching units on its rooftop. 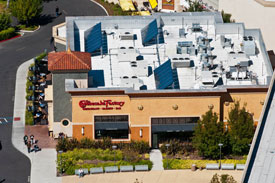 As a result of installing the 20, 4-feeoot by 10-feeoot collectors on the rooftop of its Pleasanton, Calif., location, the chain says it estimates saving roughly 58,112 pounds of CO2 produced by the restaurant a year, and about 9.52 therms per day.

With the help an incentive check from the CSI-Thermal program in late May 2012 for $47,485.00, the restaurant also estimated that the solar thermal system will offset 15 percent of the hot water load per year and save just one restaurant (out of the more than 170) approximately $2,355 per year in energy costs.

When consulting with the chain, Sun Light & Power investigated both solar hot water and solar electricity options, says Gary Gerber, president and CEO, who founded the firm in 1976. A limited amount of roof space, however, limited the restaurant to a solar hot water versus full-fledged solar power.

"It's not unusual for a restaurant to already have a lot of equipment on the roof; with all the refrigeration and HVAC and ducting, it's often hard to squeeze the solar panels in," Gerber says.

"One hint is if you're doing a remodel or anything involving the roof, give some thought to leaving as much open space as possible because that roof real estate is very valuable," Gerber says.

At 40 -square -feet eacha piece, these collectors are not tiny, but they are powerful; 1 square foot of solar panel can heat about 1.5 gallons of water. In the case of The Cheesecake Factory, for roughly 800 square feet, 850 gallons of water can be pre-heated using the sun, Gerber says. "But there's no reason why you can't put in a smaller system with six or seven collectors."

The solar water systems work by collecting sunlight using insulated panels outfitted with an aluminum frame to deflect wind. Creating a greenhouse gas effect, the heat collected by the panels gets transferred to black rubber tubes with circulating water. With each pass, the liquid gains 10 degrees, passing more than 10 times to reach a target temperature of 120 degrees F to 160 degrees F. Operators can pre-set limits to prevent overheating. The preheated water then heats the storage tank intercepted with cold water.

While the solar panels can't supply 100 percent of the restaurant's hot water, in The Cheesecake Factory's situation, there is carryover from one day to the next, Gerber says. In less sunny parts of the country, this carryover capability comes in handy.

In terms of maintenance, the main goal is to clean the panels a couple times per year.

While price may seem like the clear obstacle for installing these systems, Gerber says this surprisingly isn't the case. Currently, there is a generous federal tax credit of 30 percent for businesses who install solar panel systems, he adds. Operators can buy or lease the equipment, the cost of the latter generally runs lower than the energy savings.

On top of that, Gerber estimates businesses can see a return on their investment of anywhere from 10 percent to 15 percent.