Demand for vegetarian and vegan items on campus continues to rise and most colleges and universities now incorporate a variety of meatless meal options into their menus. But the University of North Texas (UNT) in Denton has taken one big Texas-sized step further: Last fall, it opened Mean Greens, a dedicated vegan dining hall thought to be the first of its kind in the nation at a large public university. 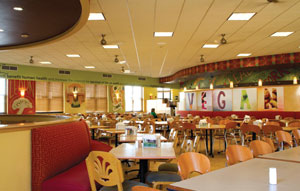 Bill McNeace, who came on board as executive director of dining services at UNT three years ago, says the idea was a long time coming. "I've been in college foodservice almost my entire adult life. Prior to joining UNT three years ago I spent many years with a contractor working at many different schools. A constant theme for more than 20 years has been that there aren't enough vegan or vegetarian options. No matter where you go, vegans and vegetarians feel slighted on college campuses. Everyone looks at the data and says, 'Well, there just aren't that many vegetarians or vegans,' but it hit me one day that there are more true dedicated vegans than there are true dedicated carnivores. It made sense to give these people a place instead of just continuing to cater to the same market in all of our dining halls. With five general-purpose cafeterias on campus, we had sufficient facilities so we started thinking seriously about turning one of them into a vegan restaurant."

With two weeks left in the school year last spring, after a year and a half of discussion and evaluating student feedback, McNeace pulled the trigger on the project and gave the directive to department staff that Maple Hall's dining facility was going vegan. "Once they got up off the floor and realized I was serious, we got to work on it," he laughs. "Some in administration thought it was a huge risk, but everyone else got pretty excited about it."

Early on, the decision was made to commit to a 100 percent vegan facility, utilizing no animal products whatsoever, versus simply going meatless. McNeace says that route was taken to avoid confusion because "vegetarian" can be open to interpretation. Some students practice lacto-ovo vegetarianism, which means they eat no meat but do consume eggs and dairy products; some consume fish, eggs and dairy but no land animals; some eat poultry and fish but no red meat; others follow strict vegan diets/lifestyles and consume no animal products at all. "And then there's the growing group of so-called flexitarians, who try to go meatless most of the time but once in a while enjoy animal products," he says. "Ultimately, we felt that committing to a 100 percent vegan operation was the best way to ensure that we could offer something that all of those various groups would appreciate and that those who follow strict vegan diets/lifestyles could be completely comfortable with. No smoke and mirrors."

From the time students left for the summer until they returned last fall, the Mean Greens — whose name is a play on the name of the UNT Mean Green football team — made its debut. Only minor facility and equipment changes were necessary, according to McNeace, but cosmetically the space was transformed with vibrant, contemporary graphics and signage, including quotes on veganism by Gandhi and Einstein.

The biggest challenges in the transformation process were related to production. "That part was huge because there really wasn't a format to follow," McNeace says. "We did a lot of research and the more research we did the more we found that there just isn't a lot to go on. We visited vegan restaurants in the Dallas area. Some were ok, and some were really bad. We knew we had to get the right chef in place who would be really dedicated to it."

That chef is Wanda White, a classically trained pastry chef who joined the UNT staff early last summer and quickly got to work testing recipes and bringing the culinary side of Mean Greens to life. That includes everything from baked goods made without eggs or dairy to soy-based soft serves. The facility's modified scatter system features stations built around offerings like vegan sushi; grains and beans; pizza and pasta; paninis, wraps and house-made veggie burgers; colorful vegetables prepared in a variety of ways; fresh fruits, soups and salad fixings; and desserts. Beverages range from self-serve soy milk dispensers to vitamin-fortified waters. With sustainability in mind, the trayless Mean Greens operation serves food on china service ware. While the university is starting construction of a central production kitchen, all prep at Mean Greens and other residence hall cafeterias is currently done at each site.

Training for staff on vegan food production methods represents an ongoing challenge, McNeace notes. "Many of our folks have spent a large portion of their lives cooking mainly with meat and what they found out is that vegan is a lot more intense as far as production goes," he says. "Meat is relatively easy. You season it, put it in the oven and forget about it until it's ready. Vegan calls for a lot more dexterity in the kitchen if you want the food to look good and taste good. Our challenge is not just for the food to be vegan, but also for it to be creative, attractive and appealing to vegans and non-vegans alike."

With seating for 300, Mean Greens attracts students, staff and off-campus patrons from the Denton community, as well. Even some Maple Hall residents who at first were upset to have had their most convenient dining option converted to vegan have started to patronize Mean Greens and discover they don't need to be vegan to enjoy the foods offered.

The next step in Mean Greens' evolution, McNeace says, is to make the operation organic, as well. The school is forming a relationship with a nearby organic community farm and hopes, within the next year, to feature that farm's produce in the cafeteria. It also has a proposal in to bring the farm right to campus, so students can see the direct link between the on-campus farm and the foods their eating at Mean Greens.

McNeace says so far operating costs for the vegan restaurant are comparable to those of the previous dining hall and traffic counts are as strong if not stronger than before the transformation. Once-skeptical administrators have come around and fully support the project, in part because of its obvious success and in part because it's proving to be a draw not only for current students but for prospective students, as well. "That's been a bit of a surprise for us," McNeace says. "As at most schools, we have students who frequently give tours to prospective students and they report that a when a lot of those kids hear about Mean Greens their eyes light up and they get excited about it."

From a revenue standpoint, he says it's tough to gauge how Mean Greens is performing as most of its patrons are on student meal plans. He adds, however, that since opening the vegan restaurant, meal plan sales are up about 20 percent. "I can't attribute that entirely to Mean Greens," he says, "but there's a good, strong correlation."