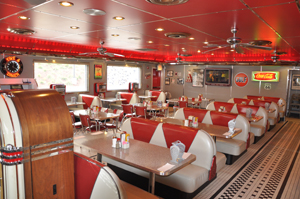 The 5 & Diner features bright and cheery interiors with lots of natural light, bold red, black and white colors, padded booths, Formica-topped tables with gleaming chrome legs and trim, jukeboxes, tile floors and period furnishings.Bob and Laurie Watson looked at more than 50 concepts when they decided to add restaurant franchising to their multi-format hospitality management company, LPM Holding Co. A lot of the biggies were in the running, from Panera Bread to Subway to McDonald's. But ultimately it was 5 & Diner, a small '50s-themed chain founded in 1989 in Phoenix, that struck the right chord. Watson bought in slightly more than five years ago, building a freestanding, 3,900-square-foot unit in Worcester, Mass. In 2008, he bought full rights to the 12-unit chain from original owner Ken Higginbotham and has since set out to reposition it for growth through franchising.

With original prototype costs hovering around $1.3 million, Watson knew that attracting his ideal franchisees — owner-operators with a passion for classic diners — would be a tall order, so he changed it. A newly rebranded, downsized 5 & Diner prototype debuted this spring, providing a more affordable platform on which the chain can build.

"We've been working for a couple of years on rebranding and relaunching 5 & Diner. We took the terrible economy as an opportunity to do that in a fairly slow and deliberate way," Watson says. "We thought the concept was great and had a strong 'cool factor,' but we needed to make it more affordable for franchisees. The original prototype, which runs between 3,800 and 4,400 square feet in a freestanding location, is cost-prohibitive for a lot of people."

The concept's new streamlined prototype kept all of the 'cool' while losing a big chunk of the cost. By shrinking to an average unit size of 2,800 to 3,200 square feet and designing for inline and/or end cap spaces versus freestanding buildings, unit opening costs dropped to between $400,000 and $700,000, depending on location and layout. The all-inclusive operating equipment package came down from an average of $180,000 previously to about $150,000.

Most of the nipping and tucking for the new prototype happened in the front of the house, where seating capacity came down from the original range of 120 to 132 seats to 90 to 110. Kitchen size remains approximately the same, at roughly 700 square feet, and no significant changes were made to the layout or food-prep equipment package, according to Watson. "We feel the kitchen and the equipment are pretty efficient already and we're comfortable with the existing back-of-the-house structure, so we left it alone. The only real change made was to upgrade our dishwashers for higher volume throughput," he says.

The typical 5 & Diner kitchen is engineered to enable a crew of five to six employees (slightly more on busy weekends) to efficiently produce a broad, all-day menu of classic and signature breakfast, lunch and dinner items. The chain places heavy emphasis on fresh, from-scratch preparation and touts best sellers such as Cadillac Meatloaf, Mrs. Cleaver's Pot Roast, a double-decker Big Bopper Burger and the hearty, three-egg Hungry Man breakfast. As in most diners, 5 & Diner serves breakfast all day and in most units represents the largest percentage of sales. "The only case where that's not true is in the original restaurant on 16th St. in Phoenix, which is the only one that's open 24 hours a day. There, dinner is the biggest meal because of the extended hours," Watson says.

In the process of developing the new prototype, he notes that some streamlining of the menu was undertaken. "We've cut down a little on the amount of menu offerings. What often happens in diners is people have a favorite dish, something they always like to have in a diner. One thing leads to another and two years later you could have 10 extra items on the menu because someone brought something to your attention that you have to try," Watson says. "As we've been rebranding the concept our culinary committee and executive chef revisited the whole menu. It's probably 10 percent smaller now than it was, but it's still an extensive full-service diner menu."

Primary cooking stations include a prep area where fresh vegetables are cut and deli meats are sliced and weighed, a 4-foot grill directly beneath a service window looking out to the counter area, a fryer and bread station, a six-burner stove positioned opposite the grill, and two steam tables. "The farthest our cooks need to walk to perform their jobs is probably six or seven steps. It's very efficient, especially when you're dealing with as much fresh product and from-scratch preparation as we do," Watson says.

Out front, each diner features a counter with eight to 10 stools facing an open window into the kitchen. It's a consistent design and service element in both the old and new prototypes. Behind the counter is the soda fountain where the chain's popular milkshakes, available in eight flavors and merchandised with premium branded ice cream, are prepared. Underscoring the importance of fountain specialties to the brand, Watson notes that the Scottsdale unit alone last year sold more than 43,000 shakes and frappes.

In addition to providing a focal point for guests, the counter also functions as a service station for staff. Behind it, dining room staff access soup urns, salad items, coffee and pastries. At one end is a retail merchandise area, where guests can purchase 5 & Diner logo t-shirts and clocks, mini classic cars, and assorted merchandise featuring '50s-era icons from Betty Boop to Elvis Presley. Among the more popular t-shirts is one that carries the message, "If 5 & Diner were on Route 66, it would still be a major highway today."

Watson says it was the 5 & Diner's unique positioning within the family/casual restaurant segment that drew him to it, particularly the extent to which the concept taps its classic '50s Americana roots. Exteriors tout neon signage and chrome. Inside and out, the units resemble converted rail cars, architecturally reflecting the diner concept's origins. Interiors are bright and cheery with lots of natural light, bold red, black and white colors, padded booths, Formica-topped tables with gleaming chrome legs and trim, jukeboxes, tile floors and period furnishings.

The nostalgic diner experience is further enhanced with music from the '50s and '60s that sets the mood as guests enter the restaurant. They're greeted and served by staff in period uniforms, including poodle skirts and paper soda jerk hats. The walls sport Yankee Stadium, classic cars, Route 66 and other symbols of the '50s era. "There must be 200 pictures of various shapes and sizes on the walls of every 5 & Diner. It all comes together to say, 'Welcome back to the good old times, to simpler days," Watson says. "We try to make guests feel at home, to make sure they're comfortable and having fun with the dining experience we offer."

Families represent a key demographic for the chain and one it caters to in a variety of ways. Kids receive the same paper soda jerk hats that employees wear, on which servers write their names. Kid's meals are presented in service ware designed and cut out to look like classic '57 Chevys or Thunderbirds, which they can take home. Originally custom-made for 5 & Diner, Watson says he's since seen them in use at other concepts, as well. "Kids love getting their chicken fingers and fries served up in a '57 Chevy. It's really neat," he says.

The fact that the restaurants serve no alcohol is another draw for families, he adds, as are the substantial portions of home-style comfort food and reasonable prices — just $10 to $11 per person, which makes dining out together doable. "A family of four can have a great meal in a full-service setting for less than $50," Watson notes. "And they can have a great time while they're here."

Adding to the "eatertainment" value at 5 & Diner are regular special events including trivia contests, sock hops on dance floors set up in the parking lots, Elvis impersonators and antique car nights. A classic car buff and collector himself, Watson says the car nights are particularly popular and his own hot rod can usually be seen among those on display at his Worcester restaurant.

It's not just families that flock to the diner, however, or the older crowd that Watson originally anticipated would be his biggest demographic group. "It's been a bit surprising how many young people show up on Friday and Saturday nights," he says. "In Worcester, we're located near half a dozen colleges and we get a lot of students and young couples. Like families, they appreciate both the fun factor and the prices."

With the new prototype ready to go, training facilities set up at both the Phoenix 16th St. and Worcester corporate locations, and management infrastructure in place to facilitate growth, 5 & Diner sits on the cusp of what Watson anticipates will be slow but steady expansion. His initial targets include markets all along the East Coast, particularly in New Jersey, New York and Pennsylvania, areas he says feature a deeply ingrained diner culture. The company recently announced plans to open eight units in the South Jersey market and the search for new franchisees is underway.

So, too, is the search for a location for what will be the chain's first corporate inline store, which Watson hopes to get up and running soon in the Boston area as a model to show potential franchisees. Given the unique culture of the concept, he anticipates a relatively slow growth rate, ideally adding three to five units this year and maybe 10 per year the next couple of years. It's a rate he's comfortable with and not about to accelerate just to hit random growth targets.

"I really feel that the way to do this right is to do it one store at a time and to find couples and individuals who really have a passion for diners," he says.