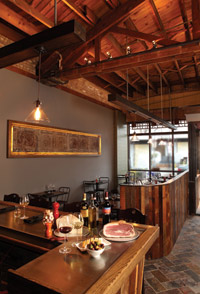 Known as Eduardo's Enoteca, the restaurant has become a pilot for a potential overhaul for the chain, which comes while deep-dish rival Giordano's is mired in bankruptcy proceedings. The new Eduardo's store offers Neapolitan-style pizzas with a thinner, slightly chewy crust. The former Edwardo's takeout store has been redesigned to fit 30 seats, including six bar seats with oak detailing and ceiling rafters, warm colors and a simple tabletop that recreates a modern Italian trattoria.