Uncommon Ground, located on Chicago's North Side, has been named the Greenest Restaurant in the Country by the Green Restaurant Association (GRA). Each Certified Green Restaurant goes through a thorough process of certification to meet the GRA's environmental standards.

The Green Chicago Restaurant Coalition has also recognized the restaurant for implementing 116 environmental steps, making them a Four Star Certified Green Restaurant in 2011. 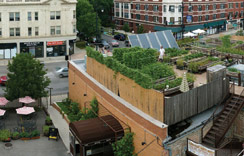 Uncommon Ground owners Helen and Michael Cameron operate two locations, one on Devon Avenue in the Edgewater neighborhood, which was deemed the greenest restaurant in America, and the other in Lakeview on Clark Street, which placed second. The Devon location features a rooftop garden made from reclaimed wood where many of the restaurant's fruits, herbs and vegetables are grown for use in the kitchen, and the restaurant sources as much locally grown and/or sustainably produced foods as it can, including spirits and beverages.

In addition, the restaurant strives to produce zero waste, in part by powering its vehicle with used fryer oil as well as through an elaborate composting, recycling and well-managed food purchasing program. The restaurant also captures the sun to heat its water.