Streamlining productivity and ensuring menu consistency in a tightly designed layout allows this company's casual dining restaurants to compete successfully in one of the most competitive pizzeria markets in the country. 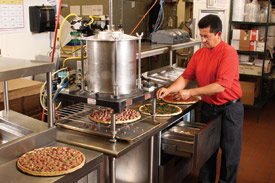 Joel De La Cruz, kitchen manager, dresses the pizza crust with sauce and use a depositor for sausage. Photo by Ron Gould.

We want to be one of Chicago's premier family pizzerias," says Daniel Costello, president of Home Run Inn's restaurant division. "This will help us build our frozen brand. Our company looks at both the restaurants and frozen business as a good investment opportunity for the family. We have a good history of being successful."

Costello's bold assertions help explain why Home Run Inn continues to thrive since its founding in the 1940s. Costello is among the third- and fourth-generation family members who are active in a company that started as a tavern owned by Costello's great-grandparents, Mary and Vincent Grittani, and located on the South Side of Chicago. Today the company remains family owned and includes eight Chicago-area pizzerias and one scheduled to open in 2012, two USDA frozen-food plants, a distribution company that delivers pizzas to 20 states and a wine partnership. Restaurant sales alone are expected to reach $17.5 million this year.

In contrast to the original tavern's 40 seats, Home Run Inn's restaurants today range in size from 1,400 sq. ft. with 60 seats to 15,000 sq. ft. with 550 seats. The newest operation, which will open in 2012 in the Beverly/Morgan Park area of Chicago, will be 4,000 sq. ft. with 120 seats. With a menu featuring pizza, pasta dishes, salads and sandwiches, the average check is $14 per person for dine-in customers and $32 for carryout transactions, which are most often divided among three or four people.

Each new restaurant's design is intended to be more efficient than the previous one. "Dan knows what he wants to accomplish and comes into our offices and works with Phil Rivera, who operates the CAD program," says Mike Perrino, project manager, Edward Don & Co., and a cousin to Home Run Inn's managing partners. "We go through the project piece by piece and select equipment. Phil puts the equipment into architects' outlines, and Dan leaves with a drawing that is about 90 percent complete."

When food arrives at the Bolingbrook restaurant, for example, which was built in 2007, staff place it into a walk-in cooler. The restaurant receives shipments of products —dough, sauce, sausage, cheese — three to four times a week from Home Run Inn's two USDA-approved manufacturing plants, which also serve as central kitchens. Salad and sandwich ingredients are purchased from other suppliers and are delivered to the restaurants regularly. The plant also produces pizza for the frozen-pizza distribution business. Costello claims that "Nielsen Co. data ranks us at a 25 percent market share, which places us as the number-one-selling frozen pizza in Chicago."

"By using the plants, we don't worry about maintenance of standards or consistency at the restaurants," Costello says. "It's a luxury for me to not worry about restaurants using the same procedures and ingredients, and it contributes to our success."

The reliance on the plants also keeps equipment costs down at individual restaurant locations, Costello adds. "For example, we don't need mixers and meat grinders."

When needed, staff take out the dough and, by hand, form it into dough balls. Staff place the balls into heavy plastic trays, which are color-coded by size for 8-inch, 12-inch, 14-inch and 16-inch pizzas. "The dough balls need 12 to 24 hours to relax under refrigeration. We warm them up to room temperature before we use them," Costello says. "Once you rip dough into dough balls, the proteins are like muscles, and they want to contract back. You must let the proteins relax."

This "fermentation" process for the dough is unique, Costello claims. "The unique flavor comes from the development of the yeast. It's a similar process when making bread or beer," he says. Staff return the dough to the cooler until needed. The next step in the process is placing the dough balls on Teflon sheets. Staff use an electromechanical dough press to form each ball into a round circle about ¼-inch thick. Staff next add a 3/8-inch-high edge by hand-stretching it into a crust that will hold ingredients and prevent spillage. They then transfer the expanded crust onto an anodized coated circular disk — like a round cookie tray with holes in it — to allow moisture and heat to penetrate the crust.

Crusts next move along pizza tables where staff dress them with sauce that is made for Home Run Inn by tomato canners in Modesto, Calif., as well as onions, cheese and a selection of about 18 other toppings. Staff use a raw sausage depositor to quickly place a portioned amount of this meat onto the crusts. "The use of raw sausage that is cooked on site imparts more flavor to the pie than a precooked product," Costello says.

Crusts then head into the conveyor oven, which is automatically set to cook pizzas for about 12 to 14 minutes at 425 degrees F. "We used to use deck ovens and had to keep an eye on the cooking," Costello says. "With the conveyors, we set the time and don't have to watch them cook. Pizzas come out perfectly each time."

The Bolingbrook location's equipment package includes three conveyor ovens. Soon after the workhorse conveyor ovens were introduced into the Home Run Inn restaurants, they were used for appetizers and garlic bread, as well. "The change from the rotary tray pizza oven to a conveyor oven was critical to Home Run Inn's consistency and efficiency," Perrino says. "Before using this equipment, customers had to wait an hour and a half for pizza. The conveyor ovens cut the wait to 20 minutes and results in greater profits." After pizzas are cooked, a staff member cuts it and places it onto a tray for service in the dining room or into a box for carryout.

Home Run Inn also contains panini grills without grooves. "We prefer flat grills for cooking chicken," Costello says. "We put the chicken on the grill, press a timer button, and know we won't dry out the chicken or produce an inconsistent product."

A two-burner range that staff use to make sauces shares an exhaust hood with the grill and fryers. Fryers contribute menu offerings such as fries, mozzarella cheese sticks, toasted ravioli and wings. "We use an oil-recovery system so we don't have to drain the fryers manually." Costello says. Oil companies remove the dirty oil from the restaurants.

In addition to oil handling, Home Run Inn's other sustainable practices include turning on machines only as needed. "The ovens have split belts that run on different speeds," Costello says. "One oven can handle two different baking times as needed, which saves energy usage compared to using two different ovens. We also turn off equipment when it is not in use."

As Home Run Inn continues to expand, the owners and partners will continue to seek more efficient equipment and means to ensure product consistency while keeping customer service at a high level of excellence. For example, when the new restaurant in Beverly/Morgan Park opens in 2012, the design will become a prototype for future locations. The kitchen is only 45 percent of the total footprint, compared to Bolingbrook, which is 55 percent. Competing to be the best in Chicago's highly competitive pizza market requires ingenuity and determination, traits that have clearly been passed along at Home Run Inn for generations.