As part of an initiative that started two years ago, casual dining chain Uno's has slowly started to roll out a new prototype unit that has less of an impact on the environment than before. 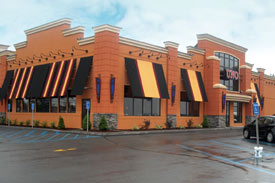 Casual dining chain Uno has placed an increased emphasis on reducing energy consumption by adjusting its equipment specifications, lighting and more. This location in Plattsburgh, N,Y., is the first new Uno location that follows these environmentally friendly guidelines.

"Our company developed a green team to look at what we source and how we source things to assess the environmental impact of what we buy," said Jamie Strobino, senior vice president in charge of new concepts for Uno's Restaurant Corporation.

Uno's spent time examining everything from the foodservice equipment they use in the kitchen to the ingredients and who provides them. No detail was too small, with the Uno's Green Team even looking at the environmental impact of the men's room urinals.

"We want to make an impact," Strobino said. At the moment, Uno's efforts focus on those steps that can provide an immediate impact for the operator.

As a result, the chain is looking at replacing the lighting in its existing locations with CFLs or LED systems to reduce energy consumption. Moving forward, this kind of spec will be a part of new stores, which will place a greater emphasis on open spaces and incorporating natural light.

Reducing water consumption is another focal point for Uno's. The chain has explored ways to reduce the amount of water consumed during warewashing and in its restrooms. In fact, Uno's now specs a waterless urinal for its men's rooms, although franchisees can opt out of this feature if they feel their clientele will not be receptive to it.

While Uno's specifies Energy Star-rated equipment where it can, it also looks for savings in other areas that do not carry this designation. Uno's green team does this by comparing items they currently use with other options to see which pieces of equipment meet their production requirements while allowing the restaurant to lower its energy consumption.

For example, Uno's recently changed its oven specification to a smaller conveyor-type unit. Because the unit is smaller than the one previously used by the chain it naturally occupies less space in the kitchen but it also consumes less energy, requires less stainless steel to manufacture and, as an added bonus, it cut ticket times by 90 seconds, according to Strobino. "That, in my mind, is a win, win, win. It is those types of things we will take a look at to see what makes sense," he said. "The new oven we use is more expensive than our previous model. But it is not significantly more expensive, and when you factor in the other savings, the cost is a wash."

Some of Uno's other green efforts include specifying low-velocity hoods, carpet that's 85 percent recycled, environmentally friendly paint and porcelain tile that is domestically produced. "We look at all elements of our buildings. We look at what can be reused, what is recyclable and what can lower the impact from a consumption perspective," Strobino said. "We reduce our consumption and it is better for the environment. So it's a win-win and anybody can do that."

Granted, some of these items cost more up front but they can provide a return on investment over time, which is a factor that's on Strobino's radar. "If we can find something that provides a return on investment in somewhere between two and five years, we are happy. In our industry, finding capital is a challenge," he said. "But companies will always debate how best to deploy their capital."

Pursuing rebates offered by the utilities for purchasing energy-efficient equipment is one way to soften the blow of the higher up-front costs. "They make it that much more affordable up front," Strobino agreed. "And by the time you are done, you are not really laying out that much money."

It is one thing to research these options but another to apply them in the field, which Uno's has done in several different locations. "We started with a location in Warwick, R.I., when we rebuilt that restaurant after the area experienced some flooding," said Strobino. "We placed a strong emphasis on environmentally friendly products where we could and tried to use less energy where we could."

Uno's then applied the same environmentally friendly principles to remodeling a 30-year-old location in Framingham, Mass., and to a new location that opened in Plattsburgh, N.Y. in June. The typical Uno's location consumes 6,000 sq. ft. but the Plattsburgh location is a little larger since it is attached to a hotel. As a result, it has some extra space for meetings and to accommodate larger groups.

While many industry observers advocate starting small when it comes to going green, Uno's is proof positive that this approach can work. "Little things all make a difference and when you are done adding them up, you can move the needle," Strobino said. "We will continue to evolve the prototype and incorporate more items as we move forward. It is a journey."