Less than five years after launching its "smash. sizzle. savor." next-gen burger concept, Smashburger in May celebrated the milestone opening of its 100th unit. By year's end, the company expects to almost double in size again and be operating in 30 to 35 markets nationwide. 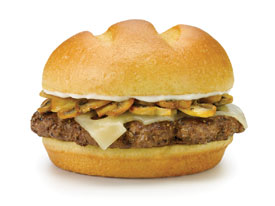 Smashburger's success is thanks to some key differentiating product innovations, says Greg Creighton, chief operating officer. Top among them is a menu strategy that combines systemwide consistency on signature products with distinctly local offerings. In Kentucky, it's a Bluegrass smashburger with Wild Turkey bourbon barbecue sauce and fried banana peppers on an egg bun. In Illinois, it's a Windy City Burger with cheddar cheese and Gulden's spicy mustard on a pretzel bun. In Iowa, it's a smashburger topped with Maytag blue cheese and applewood smoked bacon on an egg bun. Featured drinks are localized, too. "In Chicago, we have the Green River Float made from locally made Green River Soda; in Utah we have a Huckleberry Shake and in Utah a Grasshopper Mint Shake," Creighton says. "They're all made with products that are indigenous to the locale."

In every market, the "local" menu features are consistently top sellers," he notes. "It drives our marketing department crazy because every menu's different, but it's the key to us being able to deliver on our promise of being every city's favorite place for burgers."

And while burgers are the big draw, Smashburger also caters to guests who may not want a burger. A line-up of grilled and crispy smashchicken sandwiches, smashsalads and smashsides, including smashfries seasoned with olive oil, rosemary and garlic, is offered and a new fresh-made black bean burger is rolling out systemwide this summer.